Schrijven means ‘to write.’ It wasn’t until well into the 20th century that most of the people in the Netherlands were able to write. In birth, marriage or death records in the 19th century, you will often read sentences like “verklarende de moeder der bruid uit hoofde van ongeleerdheid niet te kunnen schrijven” [declared the mother of the bride, for reasons of not being educated, to be unable to write]. Women were more likely to be illiterate than men.

It is worth checking the bottoms of these records for signatures. If the signature is absent, the person was probably illiterate. But even if they could sign their names, the signature may be so unpracticed that it is obvious that they did not write often. Signing their name may have been the extent of their literacy. 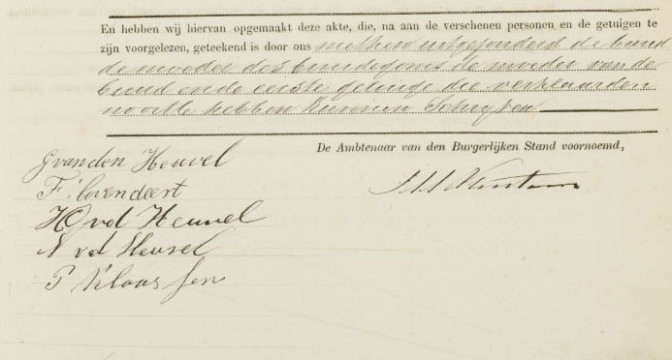 Marriage record where the bride, mothers of the bride and groom and one witness declare to be unable to write.