The first nation-wide census of the Netherlands was held in 1795, during the French occupation. The first official Dutch census that recorded every individual was held in 1830 and was held every ten years. 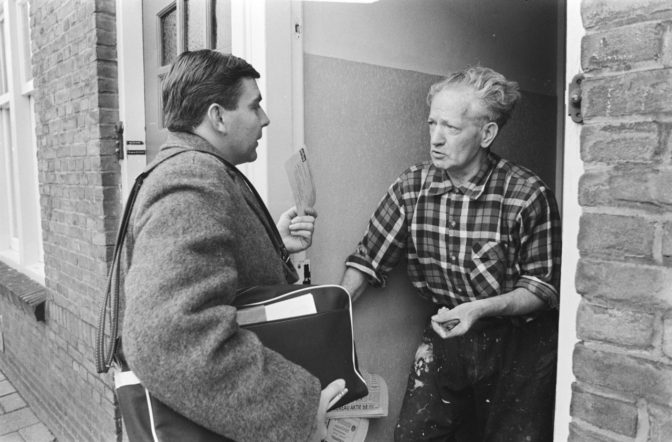 Most Dutch genealogists I know rarely use census records. The 1830 and 1840 censuses are sometimes used to get an overview of who lived where in that period, or for very specific research problems. For example, while researching the father of a child born out of wedlock in 1831, I searched the 1830 census to see whom his mother was living with at the time.

For the period since 1850, genealogists typically use the population registers instead of the census records, since they provide a more complete picture since these records are not just a snap-shot, but show how the family changed over time. 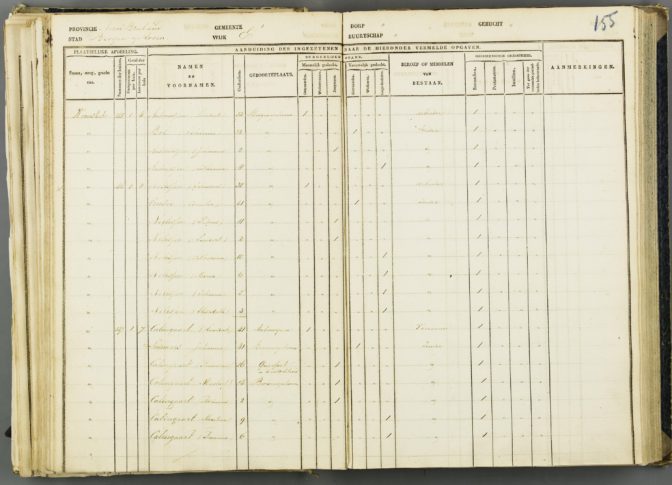 For example, let’s take a look at a page from the 1830 census record.

On the top of the page, we see that it is a page for the city of Bergen op Zoom in Noord-Brabant in the same-named munipality, ward E, no hamlet or village name, page 155. The page lists the residents of several houses on the Weverskat street/alley. The first four entries are for the residents of house no. 145, which houses one family consisting of four persons:

The 1830 census does not specify what the relation is of these people to the head of the household, but the composition of a household consisting of a married male, a married female and two young children suggests that Hendrik Antonissen and Johanna Bol were married and the parents of Johannes and Catharina. Such assumptions can be verified in other records, for example by searching for the birth records of the children or for the marriage record of the parents.

Where to find census records

The 1795 census can normally be found in the records of the French government, which are kept at the regional historical center in the capital of the province. These are rarely available online.

Census records from the 1830s onwards can typically be found in the town records in municipal or regional archives. Some of these archives have indexed and digitized their records and made them available on their own websites and/or through WieWasWie.

Some census records have also been digitized and are available online at Familysearch, in the Netherlands Census and Population Registers set. This record set is not indexed.

To find out if the census records for the town where your ancestors lived are available online, check the Digital Resources Netherlands and Belgium website.