Topics you can find in municipal reports:

Here are some highlights of the municipal report from Winterswijk in 1868. Winterswijk is a municipality on the Dutch-German border in the east of the province of Gelderland. My father’s ancestors come from this town and the surrounding countryside. 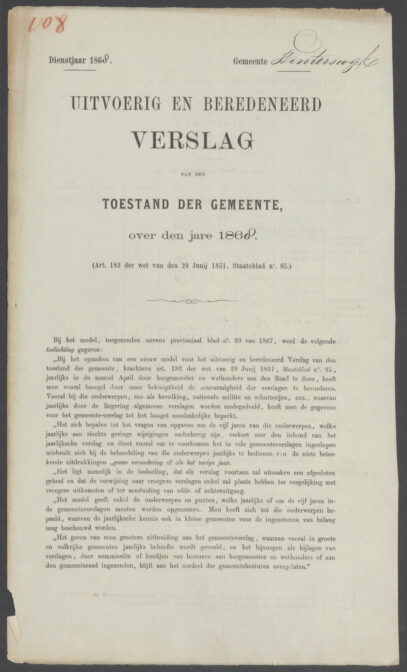 In 1868, the population of Winterswijk consisted of 3,939 men and 3,842 women, for a total of 7,781 people. The population had grown by 40 people that year. 240 children were born and 148 people died. That growth was partially offset by departures: 171 people left the municipality, while only 119 people settled there.

There were no elections in the year. Mayor Veeren was assisted by two aldermen and thirteen council members. The municipal council discussed the education in the village school, an increased allowance for the uniforms of the police constables, creating two paved roads in the hamlet of Woold, and improvement of the village street lights.

The health of the population was good as well, and fewer people than normal suffered from infectious diseases such as the measles and smallpox. One doctor vaccinated 131 children.

There were a few fires that year: a shed used to store grain and fuel burned down. A fire in the peat area was quickly put out.

28 young men were conscripted into the army. The local militia consisted of 286 men, including 138 reserves.

The list of schools showed that each hamlet around Winterswijk had their own school, which were in good condition. The municipality had nine schools for regular primary education, and three that provided more advanced primary education. Eleven male head teachers, three male assistant teachers, four male trainees, one female head teacher and one female assistant teachers provided the education. The two schools in the village were the most popular ones, with about 200 pupils each. Attendance was much lower in summer than in the winter. One of the teacher taught drawing weekly classes, one for boys and one for girls. 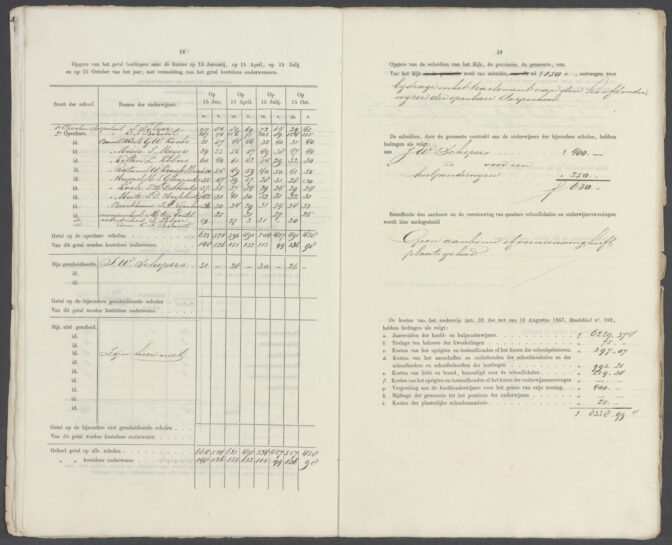 The dry summer allowed for extra peat harvesting which meant no extra donations were necessary to support the poor. The children of poor parents received free education.

The main crops were grain, rye, oats, and potatoes. The rye crop was poorer than expected and buckwheat failed. A late June frost spoiled part of the potato crops. The hot weather dried out the grass so less hay was available. There were many apples but few pears. Pests included rabbits, squirrels and wood pigeons but the damage they did was minimal. New tools make it easier for the farmer to work the land. Tests were done with underground plows, which were so successful that several farmers intended to buy one.

The health of the cattle leaves nothing to be desired and cows and pigs fetched high prices. The monthly cattle market is popular. The weekly market that some people are trying to establish is not met with much support. Trade is limited to lumber and old clothes, as well as shop merchandise. Lumber, eggs, bark and linen is imported from Prussia. Colonial wares and pigs are exported to Prussia.

Transportation options consist of a postal coach to go to Lochem, where there is a railroad. There are freight carts to transport goods to Zutphen, Deventer, and Arnhem.1

How to use these records

These records can help you to get a better understanding of the lives of your ancestors.

For example, most of my Winterswijk ancestors were farmers. This report gave me some idea of the circumstances they encountered and what crops they may have grown. One ancestor was a police constable, who would have received an increased allowance for his uniform. Some of my ancestors were school-aged children in 1868. I know now that their parents’ poverty would not have prevented them from going to school, and can see how many pupils their likely school would have had. I can check the list of council members to see if any of my ancestors served (they did not).

Several siblings of my ancestors emigrated to the United States around this time. This report tells me they probably took the coach to Lochem, from where they could take the train to the harbors in the west of the country.

The records can be found in the administration of the municipality, kept at local or regional archives. Copies would have been submitted to the provincial government, and can also be found there. A growing number of these reports are being scanned and put online, including the Winterswijk ones.

Hat tip to Willem Vermeulen for suggesting the topic.