Last month, twenty bronze monuments were installed in my home town of Oldenzaal. They are Stolpersteine, “stumbling blocks,” about 10×10 cm (4×4″) large bronze stones inscribed with the name of a Jewish resident who was murdered during the Holocaust. They are placed in the pavement in front of the house where they last lived.

These Stolpersteine are a project of German artist Gunter Demnig, created to commemorate the victims of Nazi persecution in the place where they once lived. To bow over them in respect and take a moment to remember those who are no longer among us. Over 50,000 stones have been laid in 18 countries over Europe.

My mom saw this project in Germany and initiated the project in Oldenzaal. To be able to have the stones installed, she needed to know where the victims lived, when and where they were born and died, and under what circumstances they met their untimely deaths. She also wanted to learn about their lives, about their family connections. She has spent over ten years researching these victims; Jews, Roma and Sinti.

Over the coming years, stones will be placed in Oldenzaal for all of these victims, no more than twenty at a time to make sure there is attention for each individual story. The first twenty stones were installed last month. The few surviving family members attended the commemoration ceremony.

My mom and I adopted two of the stones, belonging to a mother and daughter who no longer had any surviving relatives to remember them. I want to share their story with you, so they will not be forgotten.

Bertha Zilversmit was born in Hengelo, Overijssel, the Netherlands on 2 March 1862. She married Hartog Hedeman in 1894. The couple lived at the Putstraat in Ootmarsum, another town in Overijssel. Here, their daughter Debora Julia Hedeman was born on 8 August 1901.

Debora got a job in Oldenzaal, working at the post office as a telephone operator. After Hartog’s death in 1928, Berta went to live with her daughter Debora at the Hofmeijerstraat 2 in Oldenzaal.

In 1941, Debora was fired from the post office because she was a Jew. In 1942, as persecution intensified, she went into hiding. She could not take her mother with her on account of her age and frail health. Her mother was admitted to the hospital.

Debora found a place to hide in Eibergen, a town in Gelderland, about 40 kilometer (25 miles) south of Oldenzaal. Unfortunately, they were betrayed and Debora was deported to Westerbork, a transit camp in the Netherlands province of Drenthe.

On 6 April 1943, they collected her old mother from the hospital. Together, Bertha and Debora were transported to camp Sobibor. They were murdered there upon arrival, on 9 April 1943. Debora was 41 years old, her mother was 81 years old.

Two bronze stones have been placed in the pavement of the Hofmeijerstraat, at the location where their house once stood. It is now the location of the public library. I hope many visitors will take a moment to look down, and commemorate these women. 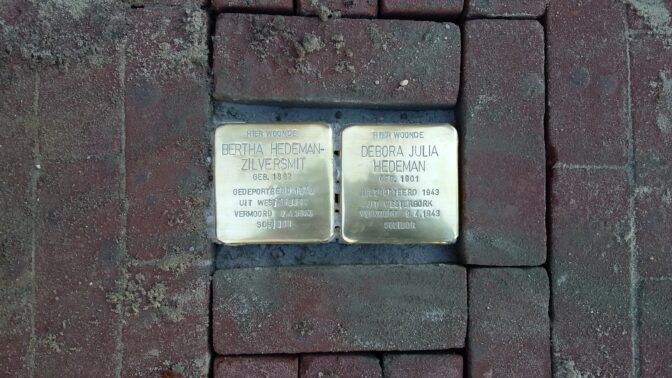