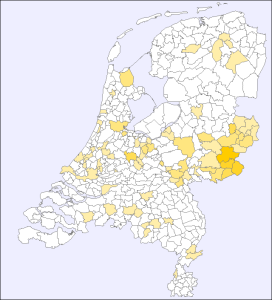 Spread of the name Hoitink in 2007

The Meertens Instituut (Institute) has a database of surnames in the Netherlands where you can search for a name to get a map that shows where people by that name lived in 1947 and 2007. This can be a great way to find out where in the Netherlands your ancestors may have come from, as many names are specific to a certain area.

The example shows that the Hoitink name was most common in the eastern part of the Netherlands. This matches my genealogical research, that proved that the family originated from Winterswijk on the Dutch-German border.