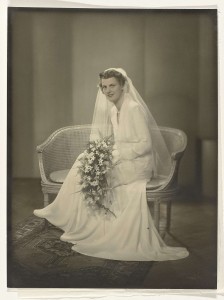 Trouwen met de handschoen literally means “marrying with the glove” and means a proxy marriage. People marry “with the glove” if they can’t be in the same location during the marriage ceremony. The bride or the groom is represented by someone with a power of attorney and the marriage will take place as usual, probably with the exception of the kissing of the bride!

Originally, a glove was displayed to signify the absent party, which is how the procedure got its informal name. The formal name is trouwen bij volmacht (marriage by power of attorney).

I have only ever encountered a proxy marriage once in my research. In that case, the man had emigrated first to make a life for himself and his fiancée. His employer would cover the cost of a wife to come over, but not a fiancée. Rather than him making a costly trip back to the Netherlands, they married by proxy so she could come over, all expenses paid.

Marrying with a glove is still possible if the bride or groom are unable to attend the ceremony, for example because of illness, inability to travel or incarceration. A glove is not enough, it requires a license by the Department of Justice which is not issued lightly.

Want to know the meaning of a term?

This article answers a question by Paul Fekkes, who wanted to know what the term meant. Do you have a Dutch term that you want to learn the meaning of? Just leave a comment and I may write a future article about it.