Using Proof by Contradiction to Focus your Research

Those who came to genealogy from a science background are likely familiar with “proof by contradiction”—a way to prove a theory by demonstrating that its opposite leads to an insupportable contradiction.[1] Many genealogists use this technique, often implicitly. Whatever the name, genealogists benefit from understanding how to apply the technique to improve research efficiency and focus.

Using proof by contradiction, a three-step mathematical example proves the theory that there is no greatest natural number.[2]

In genealogy a variation on proof by contradiction uses negative evidence—the absence of information where it is expected.[3] As one of three types of genealogical evidence, its skillful use helps to establish the validity of conclusions. Negative evidence often allows us to rule out a hypothesis. We expect to find certain information if a hypothesis is true. Lack of finding that information after thorough research contradicts our assumption, and so our hypothesis must be false.

Developing hypotheses and testing for contradictions helps focus our research. It is a technique we use in the third criteria of the Genealogical Proof Standard (GPS)—“critical tests of relevant evidence through processes of analysis and correlation.”[4] Genealogy rarely deals with mathematical absolutes, instead we must meet the five criteria of the GPS to consider a conclusion proven.

The heirs of Gerrit Harmens Rijsevoort

A deed from the Netherlands demonstrates how negative evidence and contradictions help focus research into the identity of Gerrit’s parents. 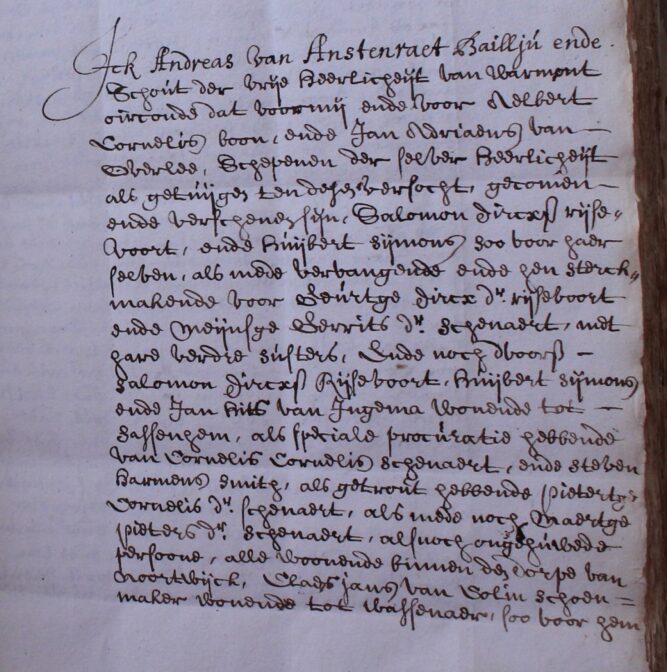 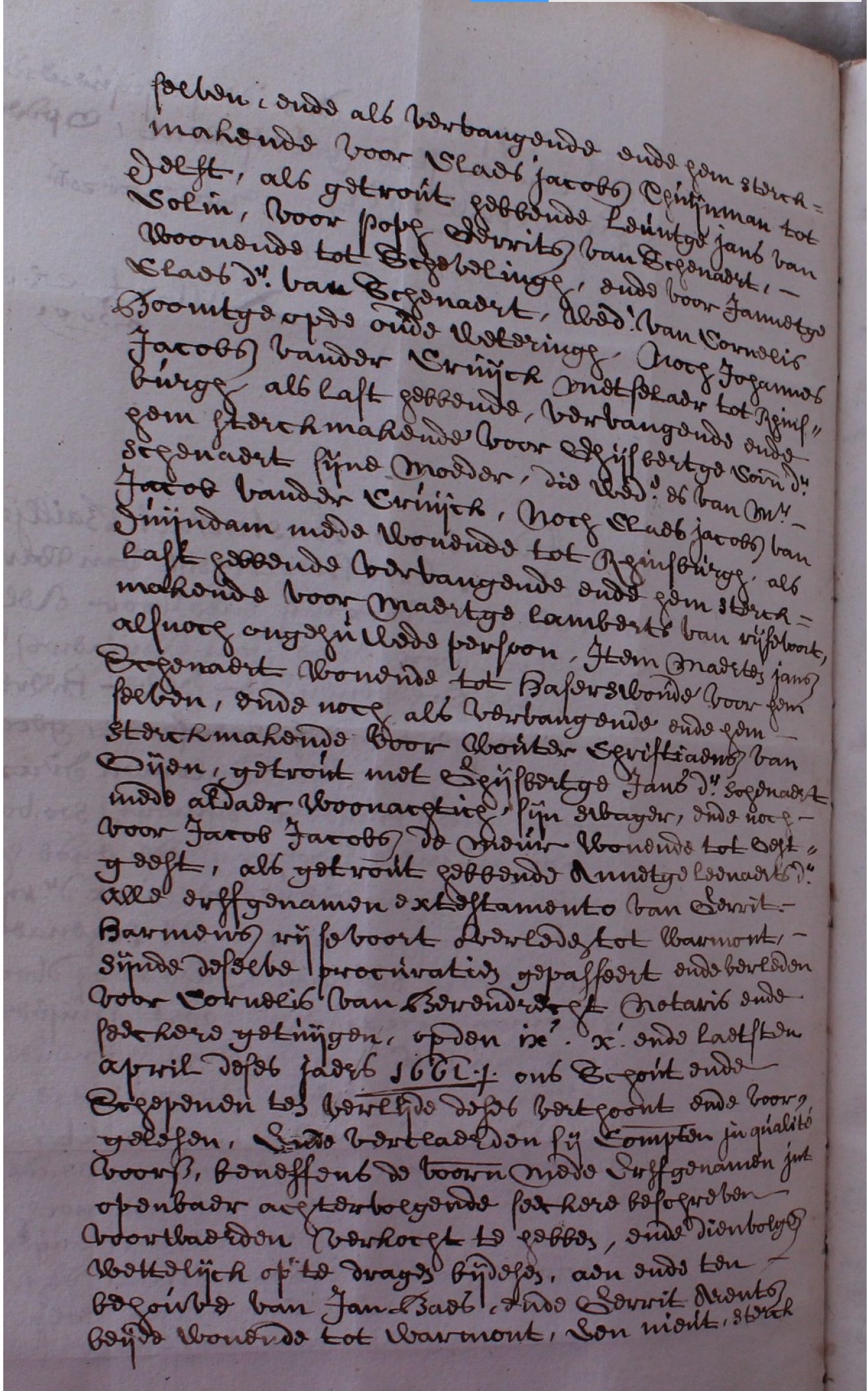 On 16 May 1661, the heirs of Gerrit Harmens Rijsevoort sold a house in Warmond, the Netherlands, to Jan Baes and Gerrit Arents. The record gives the names of Rijsevoort’s heirs according to his will, but does not state their relationships to the deceased.

To analyze a record, a researcher needs to understand its context.[6] In this case, two Dutch naming traditions provide essential background for interpreting the record.

Does the deed list the descendants of Gerrit Harmensen Rijsevoort or are the heirs a group of collateral relatives? 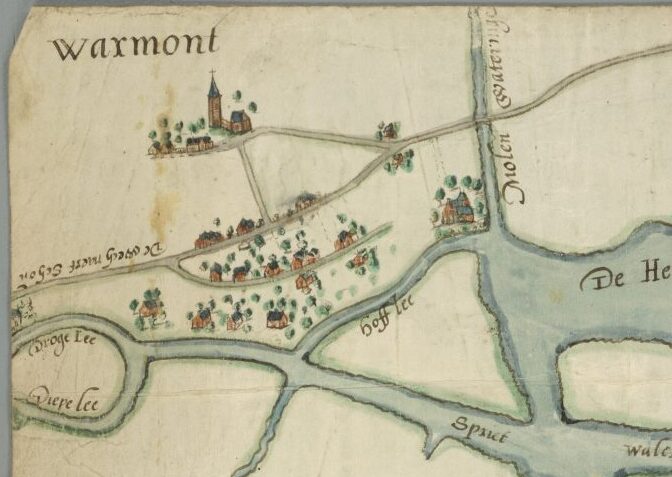 The deed mentions that Gerrit Harmensen Rijsevoort named the heirs in his will, so he could have deviated from the standard arrangement. Without a will, his estate would be divided equally between his children or their descendants, between his siblings or their descendants if he did not leave any children, or equally between the heirs of his father and his mother if he had no children or siblings or if they did not leave any descendants.[9]

In most cases in the Netherlands, wills did not seriously alter where most of the estate ended up. Under the law of the province of Holland, a parent could not disinherit a child, except in rare cases.[10] The will might have included some bequests or entitled somebody to an extra portion upfront, or could have disinherited some collateral heirs either completely or skipped over in favor of their children, but in most cases the majority of the estate would still have gone to people who would have inherited if there was no will. Therefore, the heirs in the will are probably relatives of Gerrit Harmensen Rijsevoort, but there may be relatives missing who got disinherited or skipped.

Three hypotheses about the heirs are tested to see if any lead to a contradiction.

If Gerrit Harmensen Rijsevort had children, “Gerritsen” or “Gerritsdr.” would be their patronymic. No persons named [—?—] Gerritsen or Gerritsdr. Rijsevoort are found among the heirs, so the list does not include Gerrit’s children.

None of the heirs are named Harmen, or [—?—] Harmens Rijsevoort, a name we would expect Gerrit to give his son and that we would expect to see as a patronymic among his grandchildren.

Since the heirs’ names do not match the names that we would expect to see if they were children or grandchildren of Gerrit Harmensen Rijsevoort, hypothesis one is probably incorrect.

Hypothesis 2: The heirs are descendants of Gerrit Harmensen Rijsevoort’s siblings.

We would expect to find the name Harmen among his siblings’ sons, named after their grandfather, but no heirs have Harmen as a first name. We would expect the name Harmensen or Harmensdr. as a patronymic among the grandchildren of the siblings. Only Steven Harmensen Smith had Harmensen as a patronymic, but his marriage to Pietertge Cornelisdr. Schenaert—who has a last name shared by several heirs—suggests that he was an heir as the husband of his wife, not on his own behalf.

The absence of the name Harmen, Harmensen, or Harmensdr. among the heirs suggests that they were not descendants of Gerrit’s siblings.

Hypothesis 3: The heirs are descendants of siblings of Gerrit Harmensen Rijsevoort’s parents.

If the heirs were descendants of siblings of Gerrit Harmensen Rijsevoort’s parents, rather than descendants of his own children or of his siblings’ children, that would also explain the large number of heirs and the many different names.

The hypothesis that the heirs were descendants of the siblings of Gerrit Harmensen Rijsevoort’s parents is consistent with the evidence from the record and the social context of the time and place. 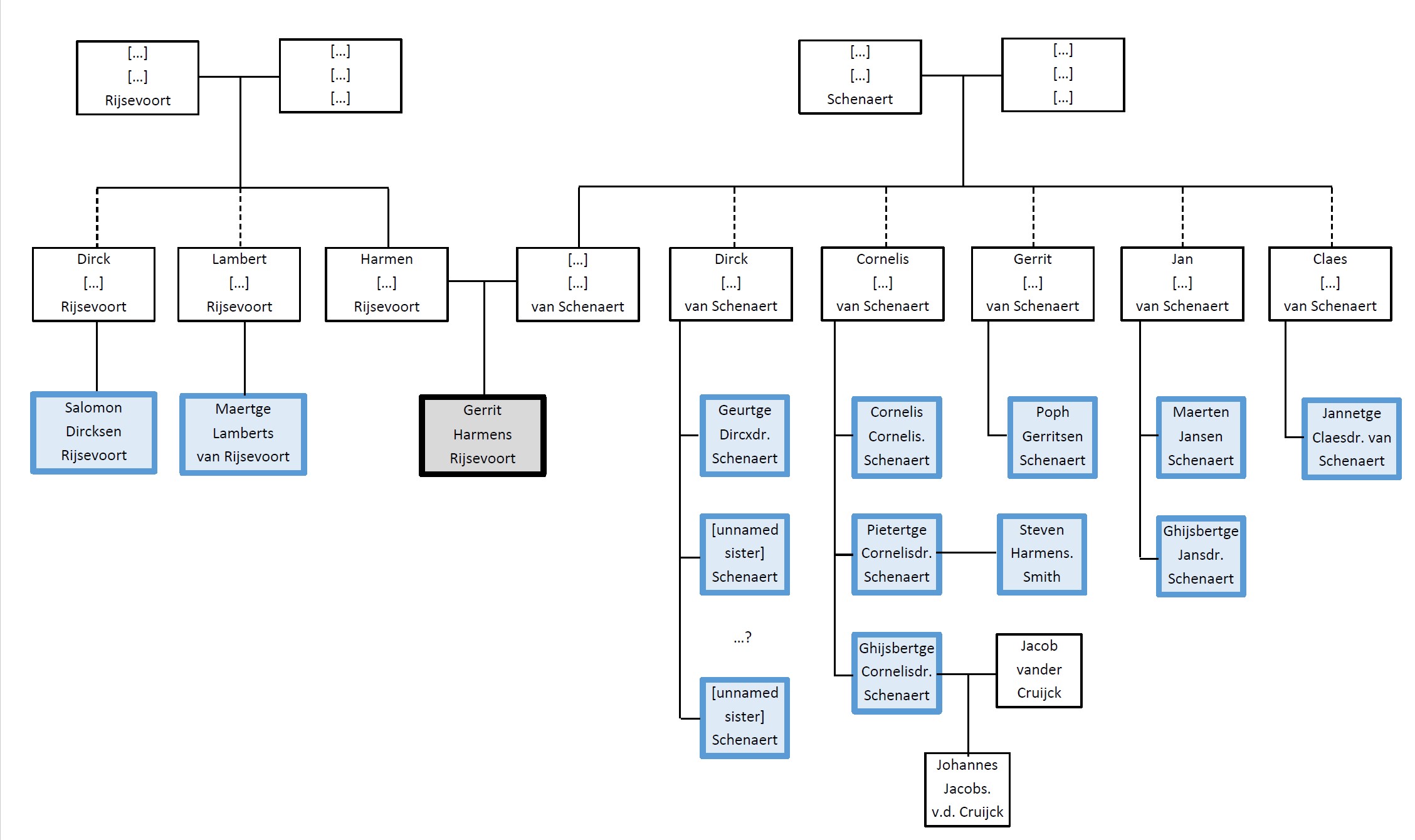 Hypothetical tree for the heirs in the deed

Proof by contradiction—creating hypotheses and testing to see if they lead to contradictions and invalid assumptions—is a powerful technique. It can show us which hypotheses are more likely to be correct and help focus our research on the most likely scenarios.

A version of this article first appeared in the September 2017 issue of OnBoard, the newsletter of the Board for Certification of Genealogists. Websites were viewed on 7 August 2017.

[3] Board for Certification of Genealogists, Genealogy Standards (Nashville, Tenn.: Ancestry, 2014), 71 for “negative evidence.”

Filed Under: Blog Tagged With: case study, methodology, OnBoard