In civil registration records, the informants of birth and death records and the bride and groom and their parents in marriage records, as well as the witnesses, are asked to sign the record. If the people were illiterate, this will be noted in the final sentences of the record. Often you will see a sentence like “verklarende de moeder van de bruidegom uit hoofde van ongeleerdheid niet te kunnen schrijven” [the mother of the groom declares not to be able to sign, as not having learned that].

I have also seen cases where the record says that a person could not sign because of a medical condition, like a missing hand or tremors. Paying attention to the final sentences can provide more insights into your ancestor’s life.

When my ancestor Adriaan Marijnissen married Johanna van Groezen in Made en Drimmelen on 6 February 1864, their marriage record was signed by the witnesses only. The spouses and the mother of the bride had declared not to be able to write, since they had not learned how to do so. The parents of the groom and father of the bride had already passed away. 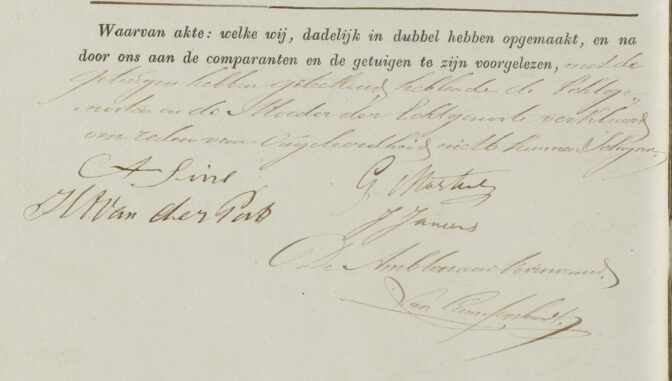