Quick tip – Your ancestors may appear in inventories

Estate inventories and guardians’ accounts often contain information about the daily lives of our ancestors. They can tells us what they owned and whom they did business with. If your ancestor was in trade, he may appear in the inventories of some of his clients. This can give you more insight into his business.

Depending on the time and place, you can find estate inventories and guardians’ accounts in the voluntary court records, in orphan chamber records, or notarial records.

On 9 September 1699, Herman ten Haeve gave an account to the court of Lichtenvoorde in Gelderland of the costs he made while administrating the estate of the children of the late Jan Elekinck, of whom he was the guardian.

An entry of 25 April 1699 tells how he hired Hermen Pieck to repair the house that belonged to the children, and to supply bricks, chalck, roof tiles, floor tiles, pebbles and other supplies, as well as plaster and repair the house, for a sum of 49 guilders and 5 stivers.1 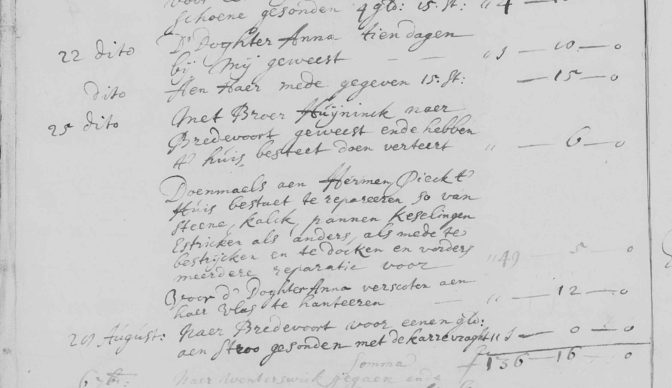