The website started out as Yvette’s Dutch Genealogy Homepage. I don’t know the exact date, but it toward the end of 1993, shortly after I started studying Computer Science. All the students got webspace to experiment with this new invention called The Internet. I had been an enthusiastic genealogist for several years so I chose to create a web page about genealogy. It was in English, since there were no Dutch genealogists online at that time.

In 1993, hardly anybody was online. There was no Ancestry, no FamilySearch, and it would be another two years before Cyndi’s List came along. None of the archives or genealogical societies in the Netherlands had a website yet. It was great fun to be there during these pioneering days.

The first version of the website was a single page with a bit of explanation and links to the few resources I could find. As the available resources expanded, I changed that to a website with multiple frames, all the hype in the mid 1990s, with links for different topics. I changed the layout again in the late 1990s, but kept the focus on links to other websites. 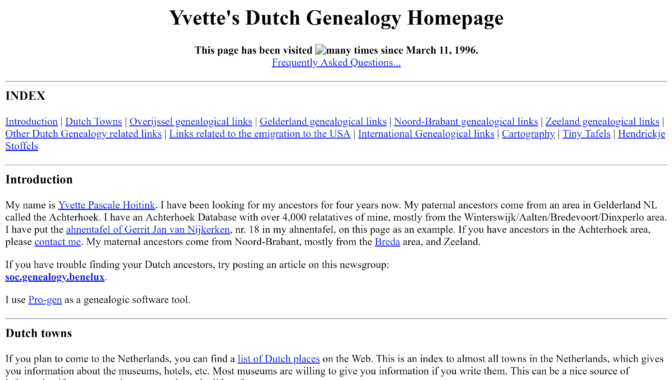 By 2005, other websites such as the Digital Resources of Netherlands and Belgium had taken over the role of providing links. I decided to change my website to a blog format with articles about doing research and move it to its own domain, DutchGenealogy.nl. Several of the blog posts I wrote then are still among the most visited pages today: 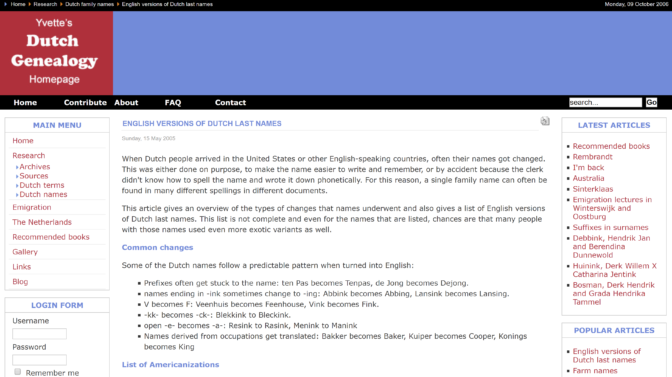 In 2012, when I started taking clients, I changed the look of the website and changed the name to Dutch Genealogy. I begin blogging regularly; two to three times per week. This saw a huge increase in visitor numbers, some of whom became clients. The website now welcomes about 250,000 visitors per year.

The website has had an enormous impact on my career. In the 1990s, having the only genealogy website made me an instant internet genealogy expert. I was invited to lecture all over the country, for which I received book gift certificates I used to buy my university books. A few years later, I wrote a book about internet genealogy together with a friend, Jeroen van Luin. The lectures and book helped build me a network in the genealogy and archives community. When my boyfriend (now husband) and I started a computer company, we specialized in creating websites for archives and were involved in several of the first websites of archives in the country.

After a couple of years, one of our biggest clients offered me a job, which is how I became an IT consultant and project manager at the National Archives in The Hague. I worked there for eight years. The last two years I worked there, I was working part-time while starting my genealogy business. I quit my job after my client list was long enough to go full-time. I still do IT projects for the National Archives and other archives in the Netherlands sometimes on a freelance basis, because I enjoy working with larger groups of people and keeping up my IT skills up-to-date.

I could not have gotten this far without the support of my readers. Your reactions and questions made it clear that there’s a need for information about genealogical research in the Netherlands, which encouraged me to keep going with my website. You helped me find my voice, and even a new career since the website is the main way my clients find me. So this isn’t just an anniversary of a website, but of 25 years of collaboration and friendship. Thank you!

Filed Under: Blog Tagged With: DutchGen