This is my third post answering the questions asked by viewers of my “Researching Your Dutch Ancestors” webinar. In this post, I will answer questions about Dutch names.

Patronymics are names that are derived from the father’s name, like Jansen = son of Jan. In some parts of the Netherlands, people did not  have a hereditary surname before the introduction of the civil registration in 1811. Read more about patronymics.

What were the naming patterns?

Most Dutch children were named after their grandparents. The order and way that they were named depends on the time and place.

Is it true you cannot create a new first name in the Netherlands?

This viewer wants to know if parents must select an established first name that is registered. This used to be the case, but is not true anymore.

Before the French occupation (1795-1813), there were no rules or regulations regarding names. The French introduced French name laws, which required that a first name had to be on the Saint’s calendar or used in antiquity. Since 1815, traditional names that were in use in the family or region were allowed as well. This meant you could not invent a new name. This law remained into effect until 1970.1

Since 1970, you can give a child any name, except one that is offensive or one that is in use as a last name. The result was an explosion of introduction of new names in the 1970s. 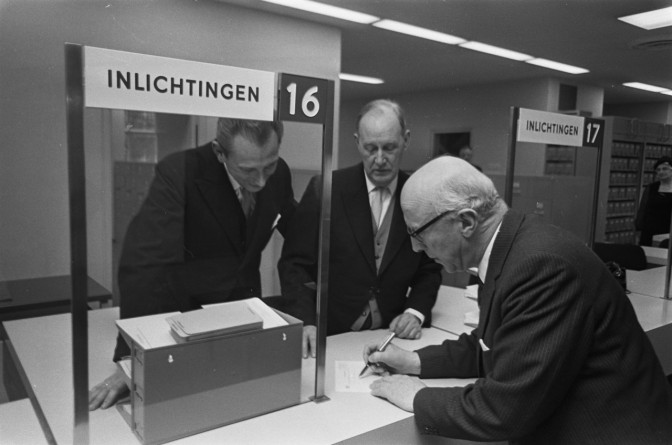 Don’t they capitalize names in records?

This viewer noticed that some of the records in the examples did not use capitals for the names. The whole concept of ‘correct spelling’ is a modern one. While many record keepers used capitals for names, many others chose not to use them.

How did my ancestor go from Theodorus Adrianus to John?

This viewer was happy to see the list of English versions of Dutch names in the syllabus, but wondered how his ancestor went from Theodorus Adrianus to John. This is indeed interesting, since the English translation would be Theodore Adrian. However, emigrants often did not go by the official translations but by sound. Theodorus Adrianus may well have been called “Janus” as a call name, which sounds more like John.

Would Vandenboom be Van den Boom?

This viewer had Vandenboom ancestors. This is a good example of how prefixes can become attached to the name in English. The English Vandenboom would be Van den Boom in Dutch. You would have to search for “Boom” as last name to find them, and the name is alphabetized under “B.” Beware that in Belgium, prefixes are sometimes attached so if your ancestors are from Belgium, try searching for both spellings.

What was the Dutch spelling of the surname Potter?

Potter is also a Dutch name, but that does not mean that everybody who called themselves Potter in English was also called Potter in Dutch. I’ve researched a Verpoorte family from Zeeland, who called themselves Potter in the US. So there’s no telling what the Dutch surname would have been. If you can’t find the family under their last name, search for other characteristics, like first names or dates and places of birth.

Where did the family Ustinx came from?

One viewer asked: “I have a surname from the mid 1600s which is now referred to as USTINX (apparently)… the following are possible variations that have been used: Hostinghs, Oftings, Ustings, Usbinghs, Ufftincx… any thoughts about narrowing this down?”

The -inx, -ings suffix is usually associated with the north-east part of the Netherlands. You can check the Database of surnames in the Netherlands to see where the variations occur today. A possibility is that the original name was “Oosting,” a name that predominantly occurs in the province of Drenthe.

Is Oftedal for this place the “farm” name?

This viewer had an ancestor for Nedre Oftedal, Gjestal, Rogaland, Norway. Unfortunately, I won’t be able to help you since I’m not familiar with Norwegian genealogy. Naming traditions vary widely from one region to the next, let alone between different countries with different languages. You will have to ask an expert in Norwegian genealogy.

Would Van Nostrand or Oostrander mean from the north country?

No, it sounds more like a “Van”-name derived from a place of origin. There is a place called Nordstrand in Schleswick-Holstein (modern-day Germany), so it may well be that an ancestor from that place went to the Netherlands and called himself “Van Norstrand,” which name transformed to Van Nostrand and Oostrander over time.

This viewer had ancestors name named Jannetje Pietersdr Roobol and Jenneke ‘t Hooft. “Dr” is an abbreviation for “dochter,” daughter. So Pietersdr is a patronymic meaning “daughter of Pieter.”

‘t is an abbreviation of “het,” meaning “the”. So she’s called Jenneke the Head, with “the Head” being the last name.