In my article about the Weeskamer (orphan chamber), an institute that oversaw the estates of orphans before 1811, several people asked me what records might exist for later orphans. The richest source of information are guardianship records, which can be found in the records of the court.

After 1811, the courts oversaw the appointing of guardians. If one parent died, the surviving parent automatically became the guardian, without the need for the court to interfere. If both parents died, the court would appoint a guardian. A guardian would also be appointed in the case of a divorce or unfit parents where the children had been removed from their care.

A guardian would not only be required to ensure the welfare of the orphan but also to administer the estate and to give an account to the court when the child reached the age of majority (21).

Between 1811 and 1838, the court that was responsible for guardianship appointments was the Vredegerecht (justice of the peace). Since 1838, appointing guardians is the responsibility of the Kantongerecht (district court). Guardianship records can be found by checking the ‘repertoire’ [case list] and then pulling the corresponding records.

Since 1909, separate guardianship registers are kept. This register contains cards for each child for whom a guardian was appointed. The cards are organized by year of majority, so you can find the card in the year that the child turned 21.

Guardianship records can provide some insights in the life of a (usually orphaned) child. You can see who was appointed as guardian, usually a close relative like an uncle or grandfather. This may be where the child grew up. You will rarely find information about orphanages or other homes where children were placed.

I researched a case once involving an orphaned teenage girl. Her guardianship record described how she worked as a maid and would let soldiers into the house when she was alone in the house. The court found out about her promiscuous behavior and ordered her to be placed in a reform school, where she had to stay for several years until she was 21.

In another case, I found information where a father had his parental rights taken away after his wife died. He had previously been convicted and sent to jail for fornication with a minor, his own stepdaughter, so the court did not find it appropriate to leave his very young daughters alone with him. The guardianship records referred to the court case where his parental rights were revoked.

Not all cases are so explicit or shocking; most are very simple and just tell you who the guardian was. But you never know what you’ll find until you check the records. 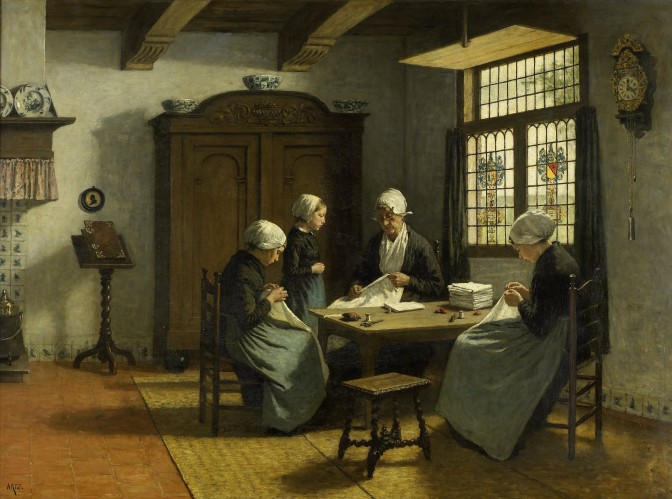 Orphanage in Katwijk, about 1880. Credits: Rijksmuseum

Where to find guardianship records

The court records can usually be found in the archives in the capital of each province. Most websites of archives will provide a finding aid that describes the court record group. Most finding aids will have very high-level descriptions, e.g. “guardianship registers 1911,” and not mention individual cases. It is rare for these records to be indexed, or available online as scans. Consulting them usually requires a visit to the archives.

Access is restricted to records that are less than 75 years old. If you want to consult younger records, you will need to send a written request to the archive well before your visit, and provide written authorization plus a copy of the ID of the persons involved or proof of death. They will review your request and will then allow or deny access. Beware that not all archives allow you to make photocopies or scans of restricted material so be prepared to take lots of notes.

If you have orphans in your family and are not in a position do this research yourself, please contact me for a quote to do the research for you. I can visit any archive in the country to see what guardianship records have to say about your ancestors.