I often get questions about finding military ancestors, and thought I would write a few posts about that. I will start with the early period, before 1795.

Before 1795, most soldiers were professional soldiers, not conscripts. The Dutch Republic (1588-1795) hired both Dutch and foreign men. Often, whole regiments were hired, including from Scotland, Switzerland, and Germany. The regiments would be stationed in garrison towns throughout the republic, changing every few years. Some soldiers married local women and continued to live in the Netherlands after their career was over.

Many officers were from noble or patrician families. The army was also an interesting career for Catholics, who were barred from high positions in civil society.

Researching military ancestors is difficult, especially if they were below the rank of officers. Tracing the commanding officer may help you to trace your ancestor.

The marriage record is often the first hint you will get that an ancestor was in the military. Marriage records for soldiers often include their rank and name the regiment or commanding officer. Mr. Wolters made an index of military marriages in the various garrison towns. These have been digitized and are available via FamilySearch. Search the catalog for the name of the place and then select Military records.

The Raad van State [Council of State] was the equivalent of the modern Department of Defense, and responsible for hiring men. The records of the Council of State are kept at the National Archives in The Hague. Their records contain resolutions about appointments, muster rolls, pensions, etc, but they are very incomplete. Often, you will have to search by regiment. It is rare to find records for individual soldiers. The finding aid is available at the National Archives website and contains links to scans of some of the records. They are only partially indexed:

The provinces where the regiment was garrisoned often also recorded the commissions and pensions, usually only for officers. You will have to research what records survive for the particular province.

The records of the garrison towns may also provide information about soldiers. For example, there may be lists of payments for soldiers who were quartered in the town or correspondence about regiments that were stationed in the town. 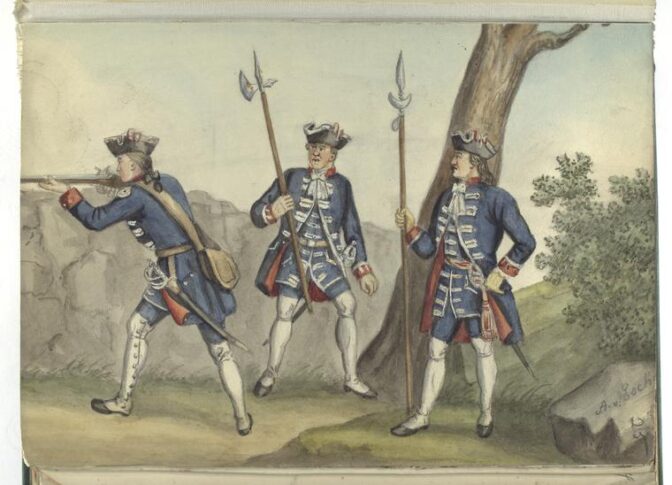