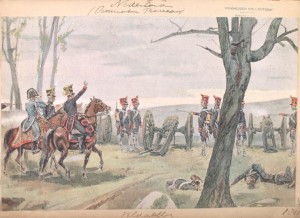 A nummerwisselaar or number changer was a person that was hired as a replacement for military service. Often, this was somebody who signed up in the same year, but whose number did not come up. They literally “exchanged numbers” so one man served instead of the other.

In most cases, a contract between the (father of the) draftee and his substitute was drawn up before a public notary. It stipulated the terms, often involving a sum of money to be paid immediately and another sum after the service was completed. As this could be quite expensive, most people who hired a substitute were well-to-do. The first hint that somebody hired a substitute can often be found in the National Militia Certificate in the marriage supplements.