Learning how to analyze a record is one of the most valuable skills we need to learn as a genealogist. To give you an example of how this works, let’s take a look at the death record of my second great-grandfather Gerrit Jan van Nijkerken. 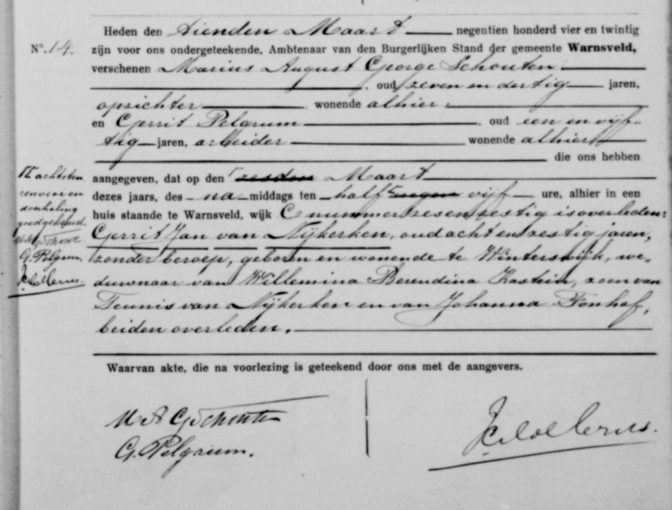 By analyzing this record and its contents, we can determine how reliable the different pieces of information are.

We know who the informants were: Marinus August George Schoute and Gerrit Pelgrum. For each piece of information in the record, we can analyze whether they would have primary (first-hand) knowledge, or secondary (hear-say).

Whether the information that this record provides is direct or indirect evidence depends on the research question.

Just because evidence is direct does not mean it is correct, especially if it is based on secondary information. We will need to compare the information with other records before we can come to a conclusion.

Independence of the record

When correlating information from multiple sources, it is important to verify that the sources are independent, meaning that they cannot be traced back to the same source of information. Records that are not independent do not corrobarate each other but merely duplicate each other.

It is unlikely that the informants knew Gerrit Jan’s family, so the fact that they were able to name his former spouse and parents suggests they may have had access to a source that provided them with that information. It is possible that they brought along Gerrit Jan’s marriage booklet. This means that the information about his spouse and parents may not be independent from his marriage record. Additional research is needed to verify that information.

Why did he die in Warnsveld?

Close analysis of this record turned up an important open end: why did Gerrit Jan die in Warnsveld while he lived in Winterswijk? Was he in an institute, perhaps a hospital?

A literature search showed that Warnsveld had a psychiatric hospital that treated people from the entire region. Research in patient records of that hospital showed that Gerrit Jan van Nijkerken was a patient there. He was committed there on 31 August 1923 by order of the court, at the request of his son Gerhard.2

The patient record does not give any medical information . Research in court records may provide us with more information about Gerrit Jan’s condition. Given his age, it is possible that he suffered from dementia or Alzheimer’s. He was in the hospital for over six months before he passed away.

Without a detailed analysis of this death record, I would never have thought to look for these records. I would not have learned where he spent the last months of his life, and would not have known about the court case committing him to the psychiatric facility.