Slavenhandel is the slave trade.

The Dutch West India Company was heavily involved in transporting slaves. They had an outpost in Elmina on Africa’s Gold Coast, where they gathered the enslaved people bought or captured in Africa. Ships would sail from Amsterdam with merchandise to buy slaves on the local slave markets in Africa, from where they would bring them to the West Indies or New Netherland. On the way back, the ships brought the proceeds from the colonies, such as sugar, tobacco, and pelts. 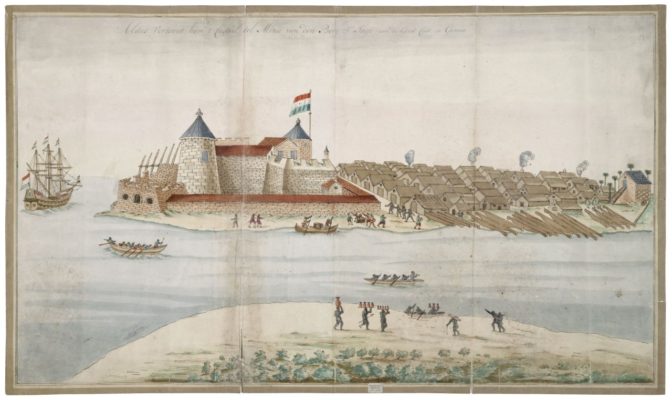 But other Dutch companies were also involved in the slave trade. An example is the Middelburgse Commercie Compagnie, out of Middelburg in Zeeland. The MCC archives were added to UNESCO’s World Heritage register in recognition of their importance for the international study of the slave trade.

It is estimated that about 5% of the people who were transported in the Trans-Atlantic Slave Trade were on Dutch ships. These transactions left records in the Netherlands too, for example in Amsterdam notarial records. For an example, see “negroes for New Netherland,” which features a notarial contract from 1661.