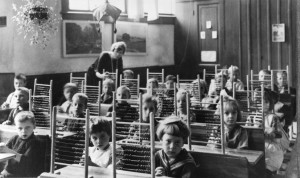 Volkstelling is the Dutch word for census. The first national census was held in 1795 but some local censuses go back to the 16th century. Between 1830 and 1930, a national census was held every ten years. Since then, there have only been four censuses: 1947, 1956, 1960 and 1971. Since the Dutch government keeps the information about its citizens up to date, there is no need to take a census anymore. The census was officially abolished in 1991. For genealogical purposes, Dutch census … END_OF_DOCUMENT_TOKEN_TO_BE_REPLACED

Population registers can be a great source of information because they list all the inhabitants of a house, usually one or more families together with their domestic staff. Since 1850, the Dutch population registers form a continuous registration where you can find who lived where at all times. They look like census records but differ in one important aspect: population registers were kept up-to-date during the period the register covers (usually ten years). If you think of the census record as … END_OF_DOCUMENT_TOKEN_TO_BE_REPLACED