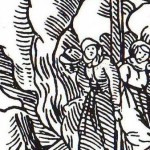 The website Witches in Flanders offers a great deal of information about witch trials in Flanders. It includes lists of witch trials and convicted witches in the 1500s and 1600s. Several people who were accused of witchcraft fled north to the Protestant parts of the Netherlands, where witchcraft was often considered a Catholic superstition. … END_OF_DOCUMENT_TOKEN_TO_BE_REPLACED