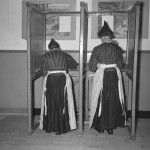 The term vrouwenkiesrecht means women's suffrage. Today it is exactly 100 years ago that women got the right to vote. The first elections were women actually got to vote was in 1920. General male suffrage was not that much older: only in 1917, men were given the right to vote without conditions on property or income. … END_OF_DOCUMENT_TOKEN_TO_BE_REPLACED

Kiesrecht means suffrage, the right to vote in political elections. In the Netherlands, the first democratic elections were held in 1795, but only a men owning property over a certain value were allowed to vote. It wasn't until 1917 that the right to vote was granted to all men, and women followed two years later. Voter registration records of … END_OF_DOCUMENT_TOKEN_TO_BE_REPLACED