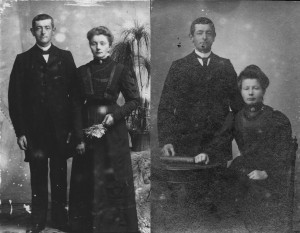 Until 1939, it was forbidden to marry your sister-in-law or brother-in-law. Royal dispensation was required for such a marriage. Many widowed men who wanted to marry their deceased wife's sister applied for a dispensation. They were routinely granted, as in the case of my great-grandparents. Extracts of the royal dispensations can be found in the marriage supplements. … END_OF_DOCUMENT_TOKEN_TO_BE_REPLACED

When my great-grandparents Hendrik Woordes and Janna Geertruid Droppers wanted to get married in 1910, they were facing a problem. The law did not allow them to marry, since his first wife Hendrika Willemina Droppers had been the sister of Janna Geertruid. Hendrika Willemina had died in childbirth the year before, leaving Hendrik with a motherless infant. When he found her youngest sister willing to marry him and take care of the child, the only way to do that was to apply for a Royal … END_OF_DOCUMENT_TOKEN_TO_BE_REPLACED