Two Tenancy Contracts from the 1700s

Most farmers in the Netherlands were tenants, not owners. This can make it hard to find out where they lived, since we can usually only find deeds for the owners, not the tenants.

Since so many of us descend from tenant farmers, I thought I’d share two tenancy contracts with you that I found for my ancestors. It is rare to find such a contract, since these deals were often made informally and if put in writing, the landlord would keep a copy and the tenant would be a copy. Usually, no copy would be filed in court or held by a notary. The only way to find these contracts is in family or house archives. Some of these archives are still in private hands, others have been transferred or microfilmed by public repositories.

Some of my Winterswijk ancestors worked on farms that belonged to the Meerdink estate. The archive of that estate has been preserved and is still in the family. The family allowed the Gelders Archief, the provincial archives of Gelderland, to create a microfilm copy. A finding aid of the estate records is available at the website of the Gelders Archief under number 0535, “Scholtengoed Meerdink.”

Call number 77 has a tenancy contract from 1775 for the Meerdinkhaken farm, a small farm on the Meerdink estate. 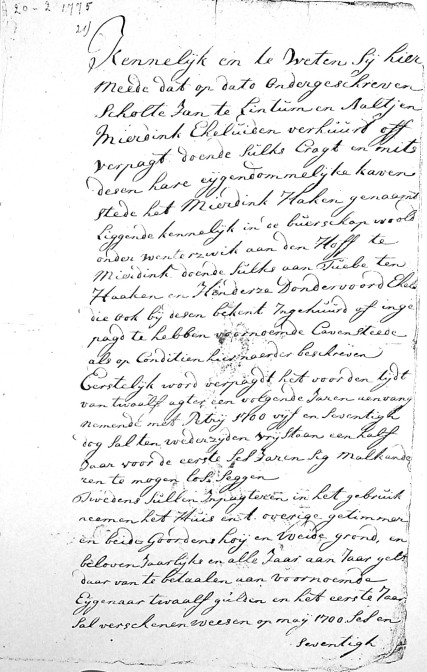 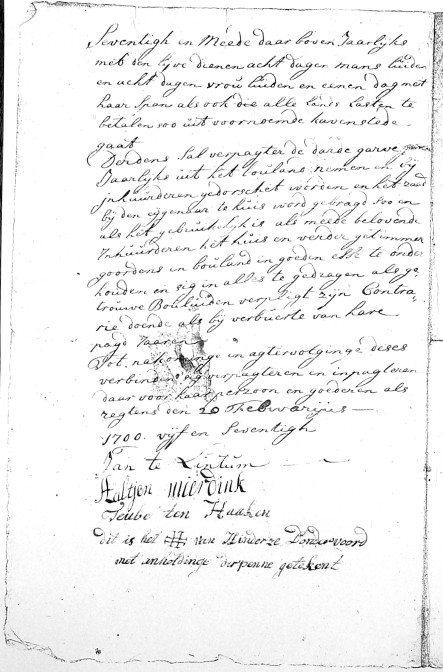 Here is an abstract of this record:

The undersigned, “scholte” Jan te Lintum and Aaltjen Mierdink, spouses, rented or gave in tenancy their farm Mierdink Haken in the hamlet of Woold near Winterswijk, belonging to the Mierdink estate, and such to Tuebe ten Haaken and Hinderze Dondervoord spouses, under the following conditions:

Isn’t this a wonderful treasure trove of information? It doesn’t just tell us who leased the farm, but it also tells us a little bit about life on the farm. For the privilege of working the Ten Haken farm, Teube ten Haaken and Hinderze Dondervoord (in other records known as Dondergoor) had to pay an annual rent plus one-third of their harvest to the landlord. In addition, they both had to work on the landlord’s land for eight days of the year, and bring a yoke of oxen to boot. And you can bet that these eight “help days” would fall in harvest time, when they were desperately needed on their own farm.

The difference in wealth between the landlord and the tenant is obvious from their signatures. The owners, Jan te Lintum and Aaltjen Mierdink, both sign with a flowing hand. Tenant Teube ten Haaken can also sign his name, although a bit less practiced than Jan. But Teube’s wife Hinderze doesn’t know how to write. Like many illiterate people in this area, she signs with a mark, but she even needed somebody to hold her pen for that.

This is an area where people named themselves after the farm. From his name, we can see that Teube ten Haaken already lived on this farm, as he was named after it.

In the same package of contracts, we find an older tenancy contract of 1712 whereby Thoebe Smalbrack and Christina Meerdink leased the same Meerdinkhaken farm. 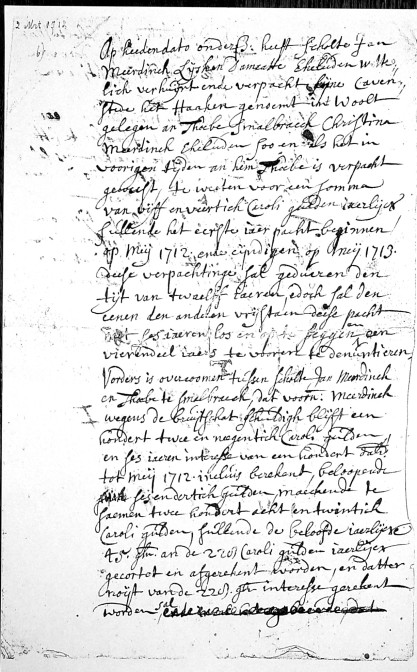 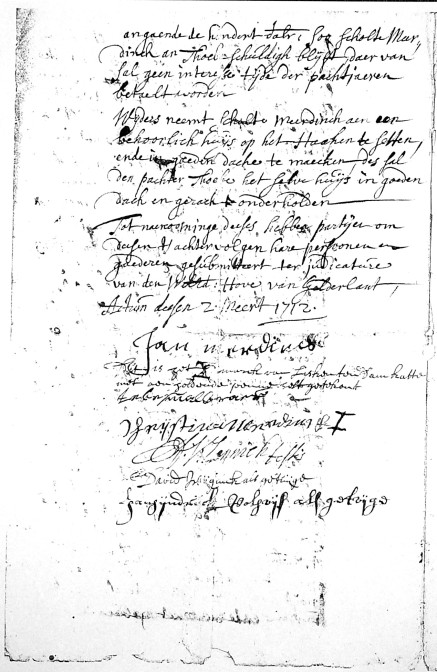 Here is an abstract of this record:

“Scholte” Jan Meerdinck and Lijsken Damcatte his spouse, rented and leased their farm called Het Haaken in the hamlet of Woold, to Thoebe Smalbrack and Christina Meerdink, spouses, as it was leased before to Thoebe, for the sum of 45 guilders per year, the first rent to start in May 1712 and end in May 1713. The lease will be for twelve years but can be cancelled after six years with three months’ notice. Jan Meerdinck will be indebted to Thoebe te Smalbraeck for a dowry 192 guilders and six years interest of 100 “daler” [1.50 guilder coins] calculated unti; May 1712, for a sum of 36 guilders, so combined 228 guilders. The 45 guilders will be taken from the 228 guilders yearly, and no interest will be charged on the 228 guilders or the 100 daler that Meerdink still owes Thoebe as long as the lease lasts.
Scholte Meerdinck promises to build a decent house at the Haaken, and Thoebe shall be responsible for the upkeep.
2 March 1712

Additional research showed that Jan Meerdinck and Lijsken ten Damkatte were the grandparents of both Jan te Lintum and Aeltjen Mierdink, the landlords  in the 1775 record (Jan and Aeltjen were first cousins, keeping the estate together). Thoebe Smalbraeck and Christina Meerdink were the grandparents of Teube ten Haaken, the tenant in the 1775 record. The tenant’s wife in 1712, Christina Meerdink,  was the sister of the landlord in 1712, Jan Meerdink, which explains why the landlord owed the tenant money for a dowry. Theube and Christina got several years of free rent in lieu of her dowry.

The two contracts have a similar term of twelve years, but the tone is quite different. This 1712 contract is a deal between family members, not just a landlord and his tenant. Theube and Christina were not required to work on the landlord’s estate, like their grandchildren were required to sixty years later.

It is interesting that Theube and Christina paid a fixed rent (45 guilders) while their grandchildren paid a rent that was partly fixed (12 guilders) and partly in kind (1/3 of the harvest). Usually, rents in kind got changed to rents in money over time, not the other way around. The reason for the rent in money in 1712 may have been that it was used to pay back the dowry.

The 1712 contract also explains why Theube Smalbraeck starts calling himself Ten Haken around this time: he lived on the Ten Haken farm, which he rented from his wife’s brother. His children and grandchildren were called Ten Haken too, all living on the same farm. Their descendants were tenants on that farm until the mid 1900s at least. The farm still exists today, although the building has been changed.

We tend to think of tenancy as short-term leases, but this example shows that these relationships can last for multiple generations. It teaches us that searching the catalogs for unusual record groups can pay off and provide us with unique records that offer a rare glimpse into our ancestors lives.

I know that there are several readers of this blog and newsletter who also have ancestors from Winterswijk. I would not be surprised if several of you recognized the names in this article. If so, please drop me a line in the comments 🙂

Feel free to reuse the information for your own trees, provided you credit me as the source. The scans are in the public domain. Suggested citation: