Was Eleanor of Aquitaine my Ancestor? Generation 19 – Willem van Wijfliet

This is the twentieth post in a series about my possible line of descent from Eleanor of Aquitaine. In the first post, I explained how I discovered the possible line, and how I am going to verify it one generation at a time. In the last post, I proved that my fifteenth great-grandmother Johanna van Wijfliet was the daughter of Willem van Wijfliet and Jenneken Henrick Daniels.

These and other records will be analyzed for evidence about Willem’s parents.

Janna, Willem’s wife van Wijflet, with her mother Lijsbeth, wife of Henric Danels son, paid entry fees to become lay members of the Illustrous Dear Lady Brotherhood in ‘s-Hertogenbosch in 1440-1441.1 See the previous post for a description of the Brotherhood. Willem himself became a member in 1447-1448.2

Entry for entrance fees of Lijsbet, wife of Henrick Danels and her daughter Janna, wife of Willem van Wijflet 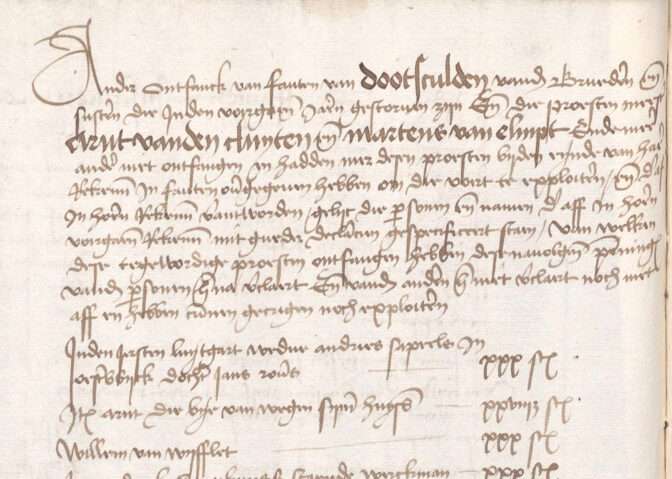 Willem van Wijfliet and his brother-in-law

Willem van Wijfliet must have married Johanna, the daughter of Henrick Danels, prior to 28 October 1437, when he was mentioned in Den Bosch court records as the brother-in-law of Peter, son of Henrick Danels.4

An anniversary book of the church of Tilburg shows that Willem van Wijfliet and his wife Johanna paid to have masses said for them.5 Their choice of the Tilburg church suggests they lived there. 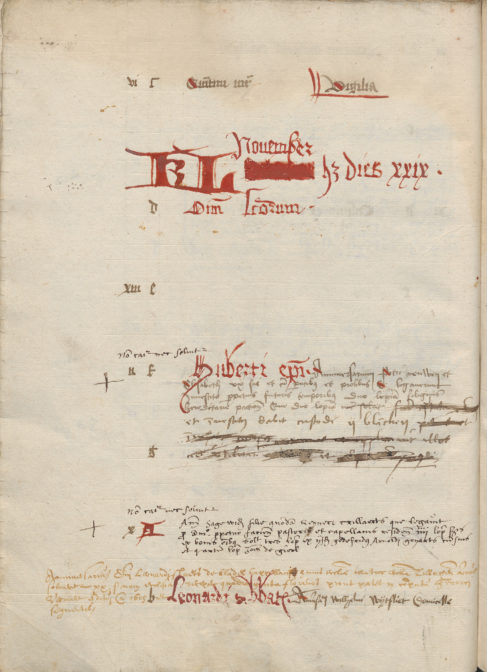 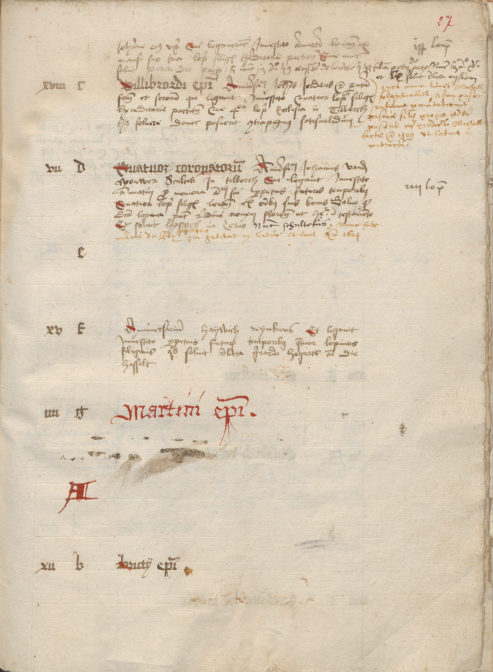 The court records of Den Bosch have dozens of entries mentioning a Willem van Wijfliet.6 They fall into two categories:

Property ownership in Tilburg links the two identities, proving both categories of records are for the same person.

In November 1427, Willem van Wijflet, son of the late Jan van Wijflet, rented the manor Steenveken in the parish of Tilburg to Jan Hubrecht Piggen.7 The record is damaged in one corner of the text, but the name of the owner and the property is in the undamaged part. 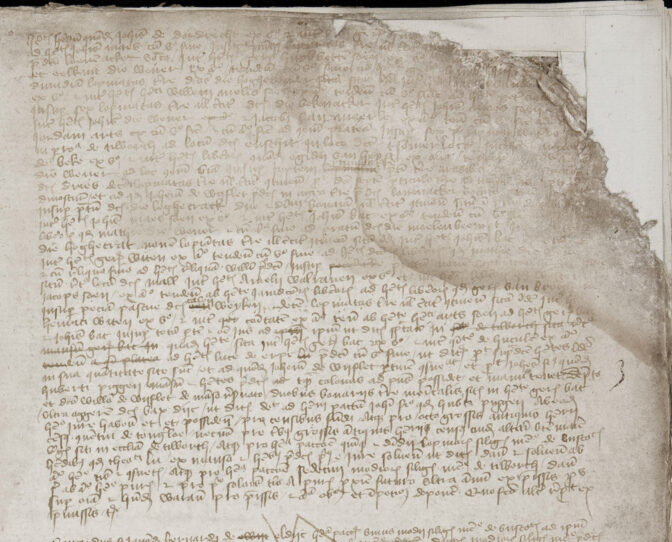 In return, Willem gave up his claims on the feudal estates of their father in favor of his brother Jan.8

A court record from Den Bosch of 27 July 1461 names Wijllelmus de Wijflet [Willem van Wijfliet] and his wife Johanne, daughter of Henrick Danels with their son-in-law Willem Pijliser, son of the late lord Jan Pijliser, knight, husband of lady Jenneke. In this record, Willem transports half of the Steenveken manor to his daughter Jenneke.10

The 1451 agreement stated that Willem gave up the claims in his father’s feudal estates to his brother Jan. Feudal registers of Brabant confirm that his brother and father held a fief from the Duke of Brabant.

This implies that Willem kept the remaining 1/6th to himself, an equal share to the others, which is indirect evidence that he was a son of Johannes van Wijfliet too. Johannes is the Latin form of Jan.

The 1390-1394 register of the Den Bosch court records the original sale, whereby Johannes van Wijfliet sold a rent of 10 guilders from the Zwanenburg in the parish of Oisterwijk to Johannes van Dordrecht.15 The exact date is unclear.

The Oisterwijk court recorded on 13 December 1423 that Gherijt Wijten, bastard son of Gherijt Wijten, had committed a misdeed against lady Elsbeen Jans van Wijflit. Gherijt Wijten promised to Willem Jans van Wijflit for himself and his brother Jan and their next of kin, to leave the lands of Brabant, as soon as Roelof van Haestrecht, Jan Back Berthouts and Jan van Erpe son of Jan Serijs, would order him to do so. He could not return unless Jan and Willem, sons of the late Jan van Wijflit, agreed. Gherijt Wijten promised to fulfill any orders given to him by the arbiters Roelof van Haestrecht, Jan Back, and Jan van Erpe.

To understand what is going on in this record, we have to understand the way the law worked in the Middle Ages. In this period, crimes against persons were mainly considered a personal affair, to be handled between the offending party and injured party. Reconciliation was the standard way to deal with this situations, with monetary compensation paid to the victim’s family in accordance with the station of the injured person. By the late Middle Ages, the government got involved and courts could prosecute crimes against people as well.17

This agreement takes place in 1423, in the transitional period between personal agreements and public prosecutions of crimes against persons. Apparently, Gherit, the bastard son of Gherijt Wijten, had committed a crime against lady Elsbeen, daughter of Jan van Wijfliet. The crime is described as an “ondaad” [literally: undeed, a misdeed]; probably a euphemism for rape. This event would seriously hurt Elsbeen’s value in the marriage market. It would be in Gherijt’s best interest to come to a personal agreement with Elsbeen’s family to avoid being prosecuted and possibly executed by the courts. Showing remorse and making amends could go a long way.

The agreement consisted of two parts: Gherijt would follow orders from the arbiters, physically removing himself from Brabant if they so ordered, and a sum of money was paid. 200 gold crowns was a great sum of money, befitting Elsbeen’s station as a lady. This money was not paid to the family, but to Philips van Meeghem. At this point it is unclear what his role was, or if he was any relation to Elsbeen. Three arbiters were appointed. This typically would be one person from each side, who between them picked a third person.

Records mentioning the wife of Jan van Wijfliet will be discussed in the next post. It is not certain whether his wife was the mother of Willem and his other known siblings. Since the line of descent from Eleanor of Aquitaine is through Jan van Wijfliet, the identity of Willem van Wijfliet’s mother is not necessary to prove the line.

Direct and indirect evidence from a range of sources leads to one conclusion: Willem van Wijfliet was the son of Jan van Wijfliet.

Relationships in this article. Possible line of descent of Eleanore of Aquitaine in bold.

That is nineteen generations down, nine to go! We’re now more than two thirds of the way back to Eleanor of Aquitaine.

Next up: Generation 20: Jan van Wijfliet.