Was Eleanor of Aquitaine my Ancestor? Generation 22 – Jan van Wijfliet

This is the twenty-third post in a series about my possible line of descent from Eleanor of Aquitaine. In the first post, I explained how I discovered the possible line, and how I am going to verify it one generation at a time. In the last post, I proved that my eighteenth great-grandmother Lijsbeth van Mieren was the daughter of Jan van Wijfliet, Lord of Blaasveld.

These and other records will be analyzed for evidence about the identity of Jan van Wijfliet’s parents. It’s a long read, so if you prefer you can skip to the conclusion to read the summary.

Note about names:
From this point forward (backward?), the ancestors are known historical figures, whose names are routinely translated in English literature. The English names will be used when discussing the ancestors, except when quoting from original records.

Only one known contemporary source directly identifies a parent of Jan van Wijfliet. On 30 June 1347, Jhan van Wijfliet lord of Blaersvelt received half of a tithe in Babyloniënbroek, of which he gave the proceeds to his mother, lady Elzebeen deaconess of Gherechem, during her lifetime.2 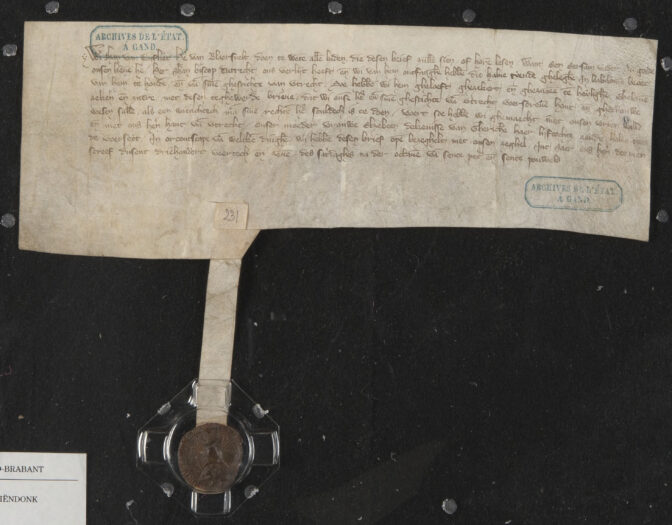 Earlier researchers and transcribers identified “Gherechem” as Gorinchem, a town in Holland.3 However, no evidence was found of a convent there with a lady Elzebeen as its deaconess.

On 2 October 1347, a notary in Den Bosch acted as executor of the estate of knight Wilhelm de Buscho and on behalf of Elze de Wijflijt, deaconess in Gerresheim, when he established a rent of five pounds for Sophia van Wijflit, that would revert to the canonesses of Gerresheim after her death.4 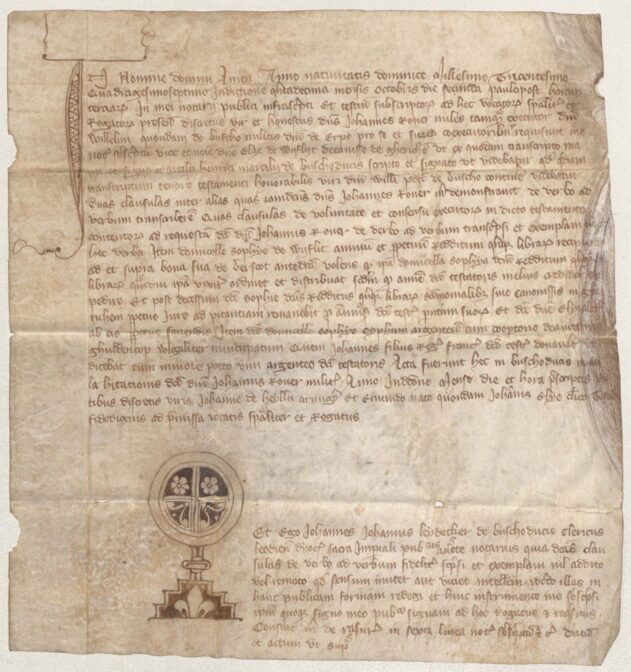 This record, found in the records of the convent of Gerresheim near Düsseldorf in modern-day Germany, shows that an Elze de Wijfliet was deaconess in the convent of Gerresheim three months after Jan van Wijfliet gave his mother Elzebeen, deaconess of Gherechem the proceeds of the tithes. Elze and Elzebeen are variations of the same name. The combination of the correct role, the variation of the same first name, and the surname that matches Jan’s own surname proves that this is the same person. The interpretation of “Gorinchem” was incorrect and should be “Gerresheim.”

On 31 March 1349, Jan van Wijfliet, Lord of Blaersveld, knight, received a rent of 116 pounds of the windmill in Berlicum. The original charter survives.5 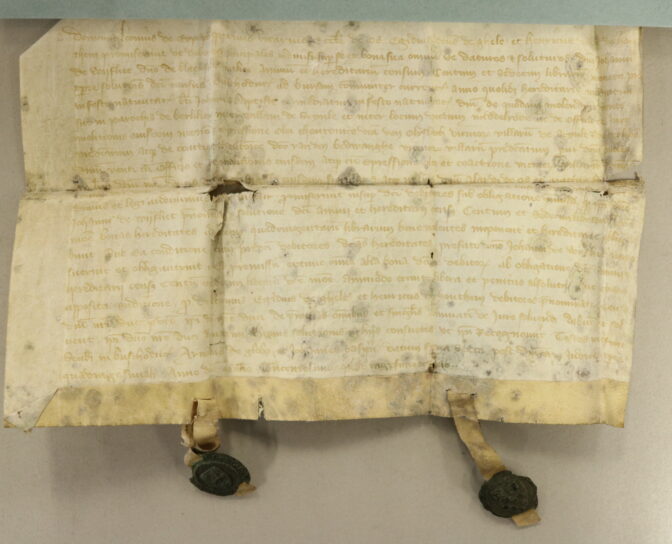 On 2 August 1356, this rent was assigned to Johannes Back, son of the late Aert called Berthout Bac van Tilburg, steward of the Duke of Brabant.6 The previous blog post identified him as the husband of Jan van Wijfliet’s illegitimate daughter Lijsbet van Mieren.

Steward’s accounts from 1574-1575 mention a rent of three pounds from the wind mill in Middelrode in Berlicum. The description of the rent includes its provenance, as copied from earlier (no longer existing) records. It says that the late Duke Jan van Brabant [John of Brabant] gave the rent to lord Jan van Wijfflet his bastard brother in the year xiiiic xlvi.7

That date in roman numerals translates to 1446. This must have been a mistake, since there was no Duke John of Brabant in the year 1446. Most likely, a copy error was made, introducing an extra ‘i’ for the century, and this transfer was done in 1346. The detail of Duke John of Brabant giving it to his bastard brother Jan van Wijfliet is less likely to have been introduced as the result of a copy error than an extra i, so that information is more reliable. 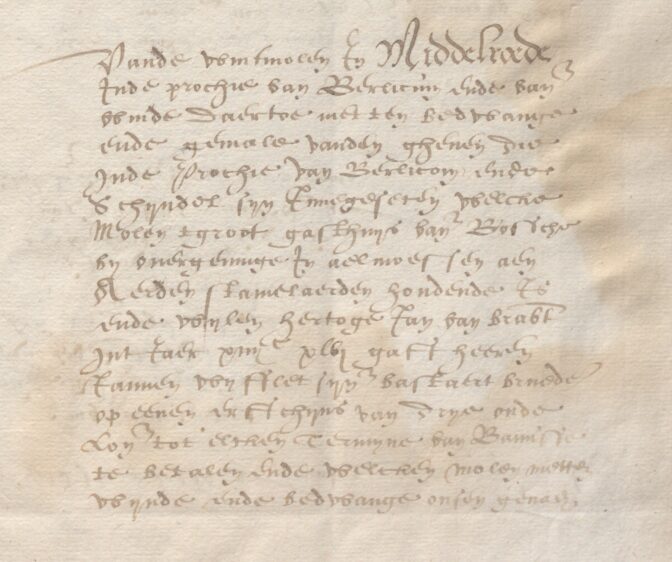 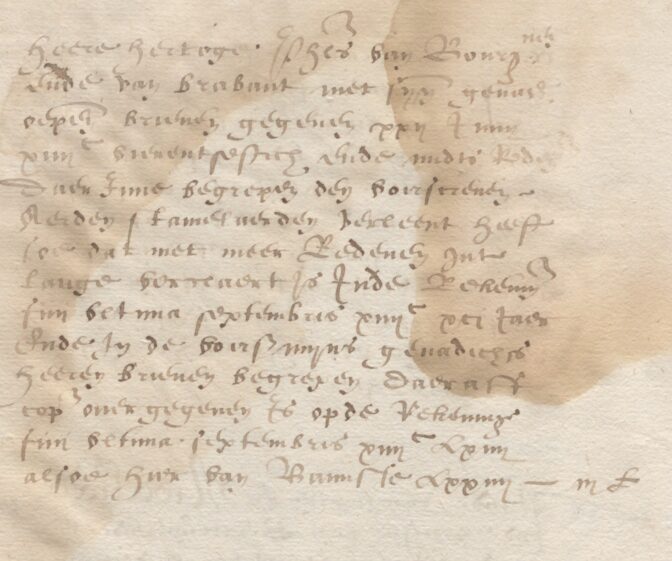 Other records confirm the relationship between Jan van Wijfliet, lord of Blaasveld, and John III, Duke of Brabant.

In a charter of 9 August 1345, John, Duke of Lothier, Brabant and Limburg, gave power of attorney to his brother John, lord of Wijfvliet and Blaesfelt, to end the differences between the cities of Ghent and Termonde [Dendermonde].10 The charter explicitly refers to Lord John as “onsen brueder” [our brother].

Two days later, John, Duke of Lothier, Brabant, and Limburg proclaimed an agreement between the cities of Flanders and Termonde, in his role of arbiter of their dispute. The proclamation was made in the presence of the council of the duke, including Jan van Wijfvliet, lord of Blarsvelt.11 This charter does not identify a family relationship between the duke and Jan van Wijfvliet, but a place on the council would be fitting for a brother, even one born out of wedlock.

In September 1344, Jan van Wijfliet received 300 guilders from the city of ‘s-Hertogenbosch on behalf of the Duke of Brabant.13 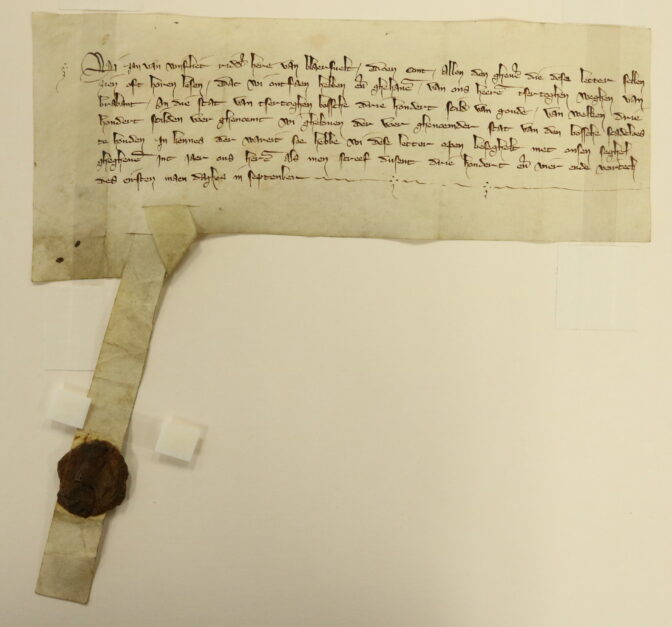 John III of Brabant’s daughter Maria married count Reinald III of Gelre on 1 July 1347. After the marriage, Jan van Wijtvliet was appointed as steward of Gelre to support the young duke and gain influence in Gelre.14 In that capacity, he sealed a charter of reconciliation between Reinald of Gelre and the citizens of Nijmegen in 1352.15 The seal matches that of the 1344 charter. 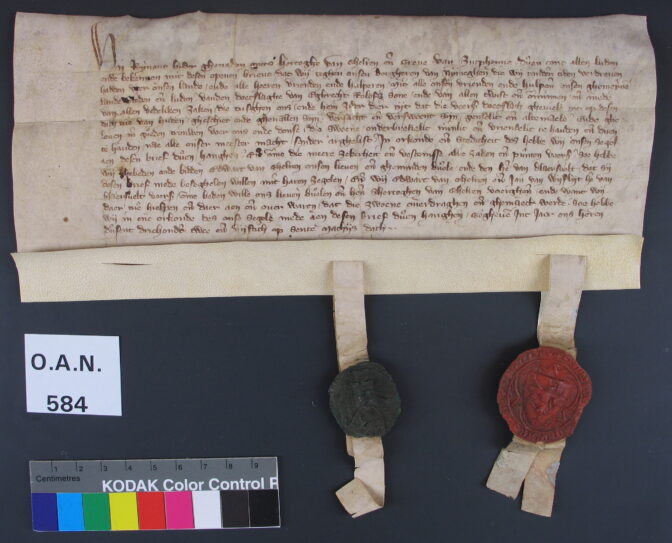 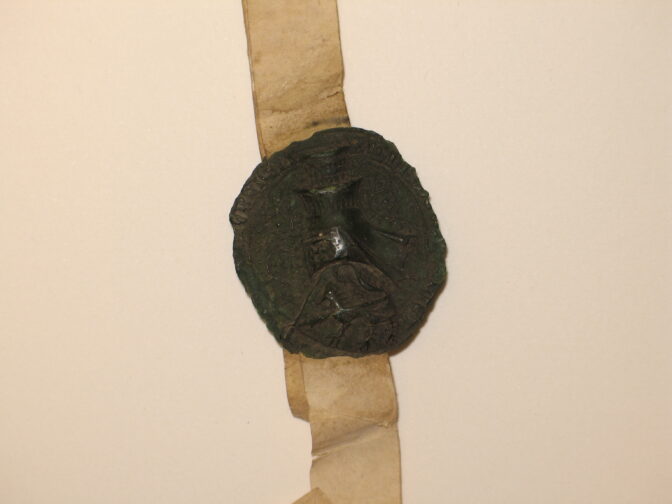 These interactions show that Jan van Wijtvliet was a trusted councilor to John III Duke of Brabant, consistent with him being his half-brother.

Uncle of Duchess Johanna of Brabant

In 1360, Wenceslas of Bohemia, Duke of Luxembourg, Lothier, Brabant, and Limburg, and his wife Johanna inherited a mill in Weerde from their uncle John Wijtvliet, lord of Blaasveld. The record survives in the form of a copy in the chartulary of the Duchy of Brabant. In the record, Wenceslas and Johanna refer to “onsen lieven oom oom heer Janne Wijfliet” [our dear uncle lord John Wijfliet].19

Johanna, wife of Wenceslas of Bohemia was the daughter of John III of Brabant.20 The mention of Jan van Wijtvliet as her uncle in the 1360 record is consistent with the 1343 request to the pope and 1345 charter that named Jan van Wijfliet as the brother of John III Duke of Brabant [her father].

The Brabantsche Yeesten chronicle has a section about the sale of Grave by John of Cuijk to Jan van Blaasfelt, that mentions him as the brother of Lady Johanna: 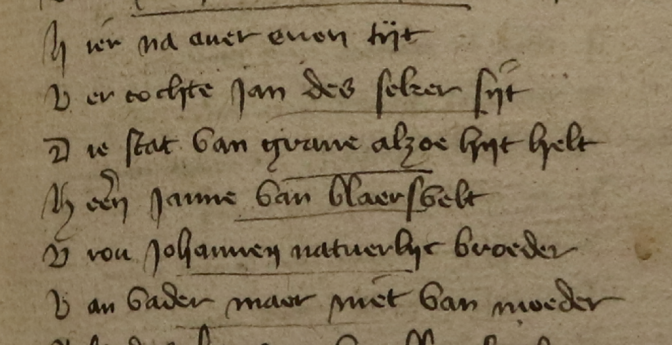 Afterward, after some time,
John [of Cuijk] sold, which is certain,
The city of Grave
to lord Jan van Blaesvelt
Lady Johanna’s natural brother,
by father, but not by mother.

“Lady Johanna” in this period was Johanna, Duchess of Brabant, the daughter of Duke John III of Brabant, mentioned in the 1360 charter above. By calling Jan van Blaesvelt her natural brother, this chronicle implies that Jan van Blaesveld was the illegitimate son of John III, not John II, as stated in the 1345 and 1360 records.

The Brabantsche Yeesten chronicle was started by Jan van Boendale in the early 1300s. Other writers continued the chronicle after Van Boendale’s death. The manuscript that has the section about Jan van Blaesveld was written by Wein van Cotthem.

In her thesis Middeleeuws Kladwerk: De Autograaf van de Brabantsche Yeesten, Boek VI (Vijftiende Eeuw) (Medieval Draft: The Autograph of the Brabant Gests, Book VI (Fifteenth Century), Astrid Houthuys analyzed the manuscript. She recognized that this manuscript was a draft, which Van Cotthem corrected over time. Analysis of the watermarks in the paper showed the manuscript was started around 1432. Houthuys identified several corrections and additions during the creation of the manuscript. Van Cotthem showed himself to be a serious historiographer, who valued historical accuracy over a convenient rhyme.22

This means that Van Cotthem must have thought the information that Jan van Blaesveld was Johanna of Brabant’s half-brother was correct, or he would not have written it this way despite the nice broeder-moeder [brother-mother] rhyme. However, he wrote this a century after the events, and his sources had other errors that needed correcting. This makes the chronicle less reliable than the charters from 1345 and 1360, and the papal request in 1343, that were created by John III of Brabant and Johanna, who had personal knowledge of their relationship to Jan van Wijfliet, lord of Blaasveld.

A charter from 1353 confirms that Jan van Wijfliet was the lord of Cuijk. In the charter, Johan van Wijfliet, lord of Kuyc and Blaersvelt, was one of the noblemen who promised Gyselbrecht, Lord of Bronckhorst the sum of 2,000 old shields per year as long as he kept faith with the Duke of Gelre.23

The following year, Jan lord of Kuyc and Blaersvelt, and lord Giesbrecht van Hoeps, knight, came to an agreement to end their dispute about their rights and tithes.24 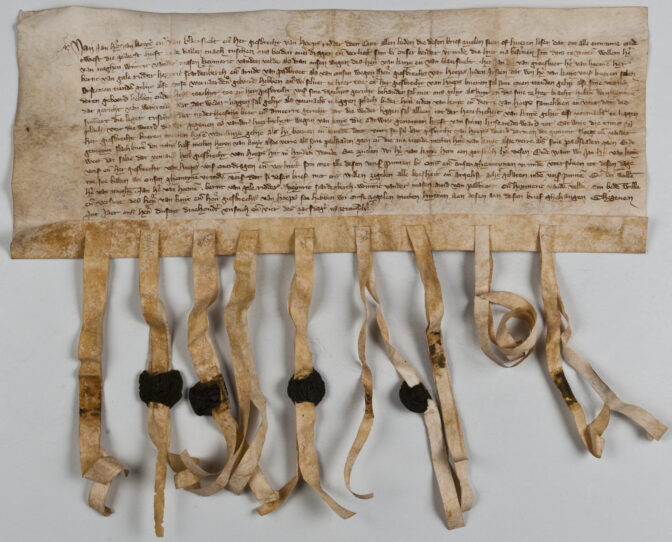 These charters confirm the information in the chronicle that lord Jan van Blaesveld was also the lord of Cuijk.

Lord John of Cuyck, I inform you,
Lords, Friends, and Kinsmen,
one day secretly came into Grave
He had friends there, who loved him
And preferred the born lord to a purchased one
After he gained the fortress and the moat,
He attacked Lord John of Blaesvelt with all his might
At which time Jan van Blaesvelt
Remained dead in the altercation.

Jan van Wijfliet’s seal showed a climbing lion facing left, with a bar diagonally across it.27

The Dukes of Brabant used a gold lion on a black shield as their coat of arms, as can be seen from this manuscript showing the coats of arms of various noble families from 1405.28 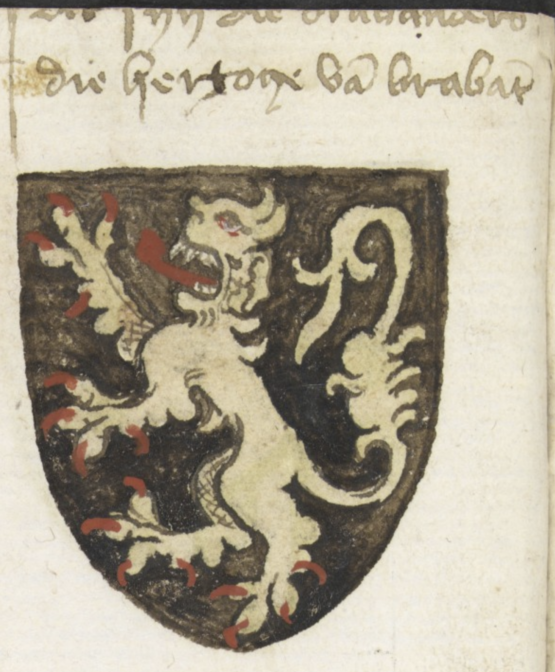 That manuscript showed the same coat of arms with a bar across it being used by Jan [John], bastard of Brabant.29 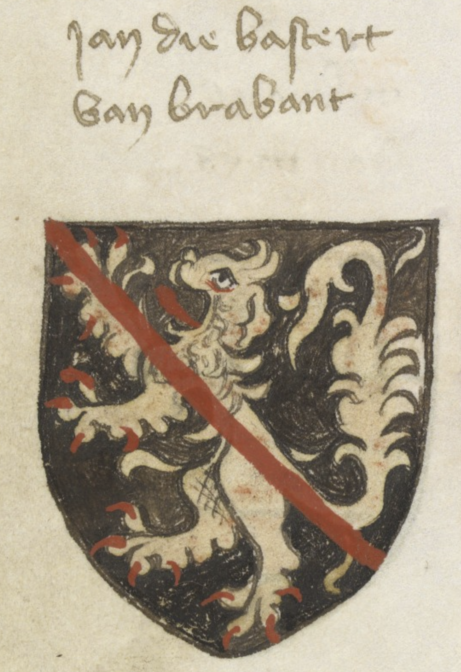 Several pieces of evidence prove that Jan van Wijfliet lord of Blaesveld was the illegitimate son of John II Duke of Brabant.

Johanna Duchess of Brabant, daughter of John III, named Jan Wijfliet her dear uncle in 1360. A later chronicle that named Jan van Wijfliet as Johanna’s brother from another mother was not based on eye witness testimony and must have been mistaken in the nature of their family relationship.

The Dukes of Brabant used a gold lion on a black shield as their coat of arms. Jan van Wijfliet lord of Blaesveld used the same shield with a bar, indicating his status as a bastard.

Apart from the conflicts resolved above, all evidence agrees that Jan van Wijfliet was the illegitimate son of John II, Duke of Brabant, and Elsbeen van Wijfliet, who later became deaconess of the Gerresheim convent.

Next up: Generation 23 – John II of Brabant