Was Eleanor of Aquitaine my Ancestor? Generation 3: Johannes Marijnissen

This is the fourth post in a series about my possible line of descent from Eleanor of Aquitaine. In the first post, I explained how I discovered the possible line, and how I am going to verify it one generation at a time. In the last post, I proved that my mother was the daughter of Johannes Marijnissen and Catharina Flooren.

Researching my mother showed her father was Johannes Marijnissen, born in Breda on 11 November 1918. She knew both his parents and identified them as Petrus Marijnissen and Cornelia Francisca van den Heuvel. Since opa is deceased, I can go into more detail about him than I did for my mother and me. Opa is the earliest generation in my possible line to Eleanor that I knew personally since he died when I was fourteen.

My grandfather’s birth record will become public on 1 January 2019, since access to birth records is restricted for 100 years. As his granddaughter, I was allowed to view his birth record and get a photocopy when I visited the Breda City archives in 1991. 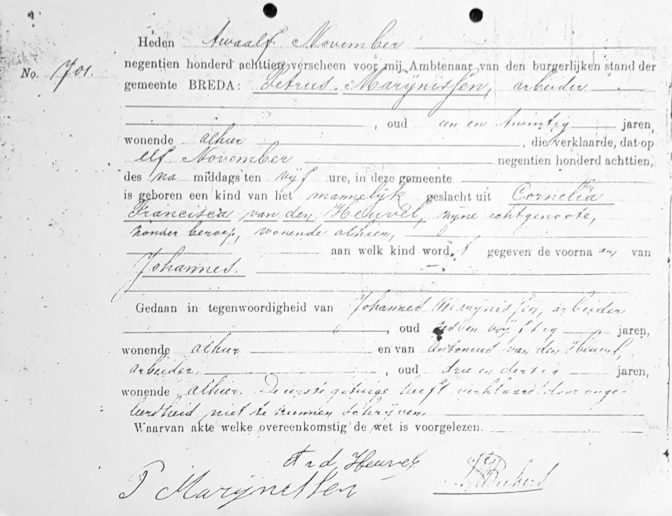 11 November 1918 was Armistice Day, the end of World War I. Although the Netherlands was neutral during this war, the war did affect the country since many young men were mobilized into the army, and many refugees from Belgium came to the Netherlands. Breda, just five kilometers (three miles) from the Belgian border, saw a great number of Belgian refugees.

The earliest public record about the birth of Johannes Marijnissen is the population register of Breda 1918-1937, which in this period was organized per family. It shows him in his parental household as the son of Petrus Marijnissen, born in Terheijden on 11 May 1897, and Cornelia Francisca van den Heuvel, born in Breda on 2 June 1893. It confirms that he was born in Breda on 11 November 1918.2 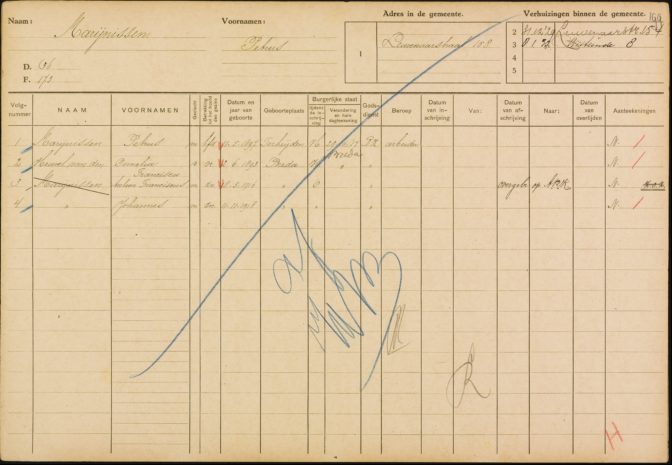 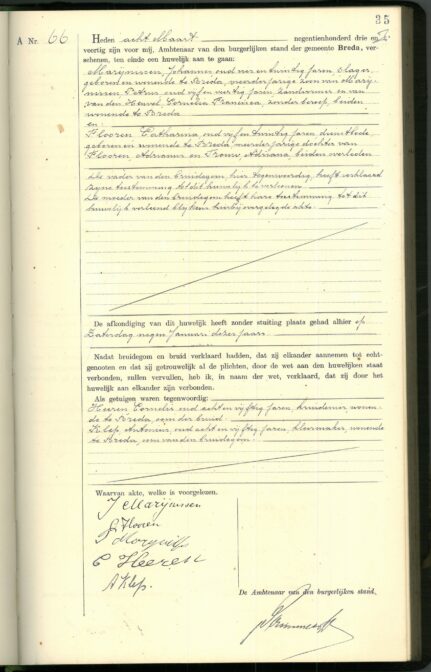 I also have their marriage booklet, an official document that was used on several occasions. The first information that was recorded was the information about the marriage and the names, birthdates, and parents of the spouses. On the next page, the names of children were added when they were born (not shown because of privacy). And at the end of their lives, their death dates were recorded on the bottom of the first page. The information is added by civil registration officers at the time of the recording of the vital events and is very reliable. 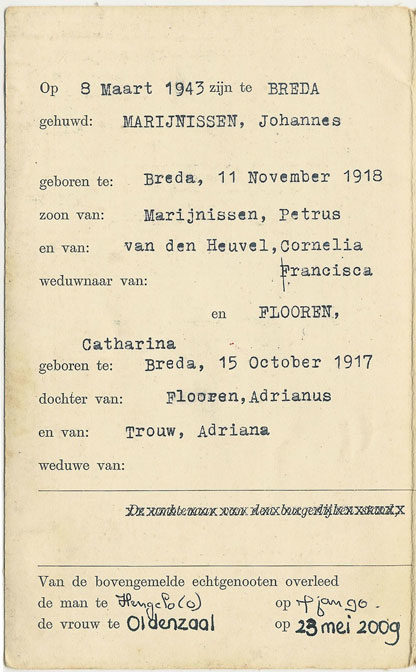 My grandparents’ booklet shows that Johannes Marijnissen was born in Breda on 11 November 1918 as the son of Petrus Marijnissen and Cornelia Francisca van den Heuvel, and that he married my grandmother Catharina Flooren on 8 March 1943. It shows that he died in Hengelo on 7 January 1990.4

Their marriage was announced in the civil registration section of the local newspaper, confirming they were married in the week before 12 March 1943. It shows he was 24 years old and she was 25 years old, consistent with the marriage record and marriage booklet.5 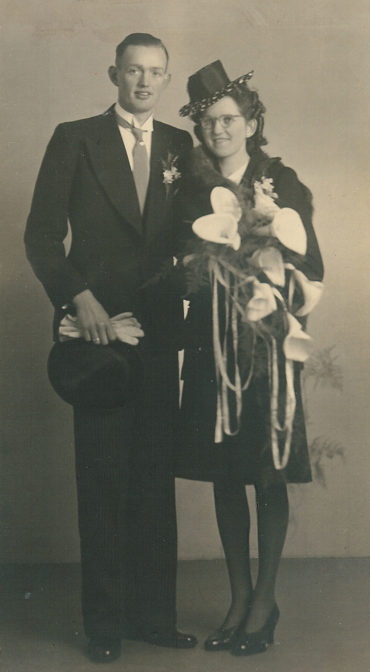 This photo shows Jan and Toos (nickname for Catharina) on their wedding day. They married in the middle of World War II, when somber clothes were the norm.

Grandpa promised to get grandma a wedding bouquet. He misremembered what flowers she wanted, and turned up with a bouquet of arums instead of orchids. Grandma was not amused, because arums were traditionally used for funeral bouquets; a poor choice for a wedding.

During World War II, my grandfather was sent to Germany as a forced laborer. He came back without permission when my grandmother gave birth to their oldest daughter. He had to go into hiding and ended up as part of the Dutch resistance. 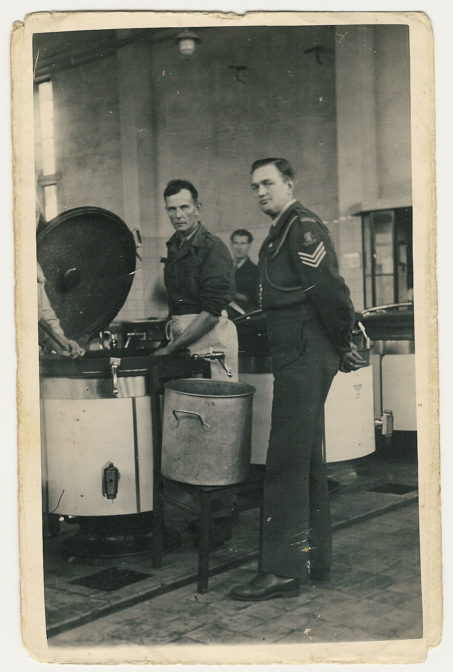 After the war was over, grandpa joined the Military Police at the Willem III barracks in Apeldoorn. He was transferred to Winterswijk. In 1952, he transferred to the Airforce and relocated to the Airbase in Twente, where he worked until his retirement. The information is confirmed by his military personnel file, which shows him as a son of Petrus Marijnissen and Cornelia van den Heuvel.7 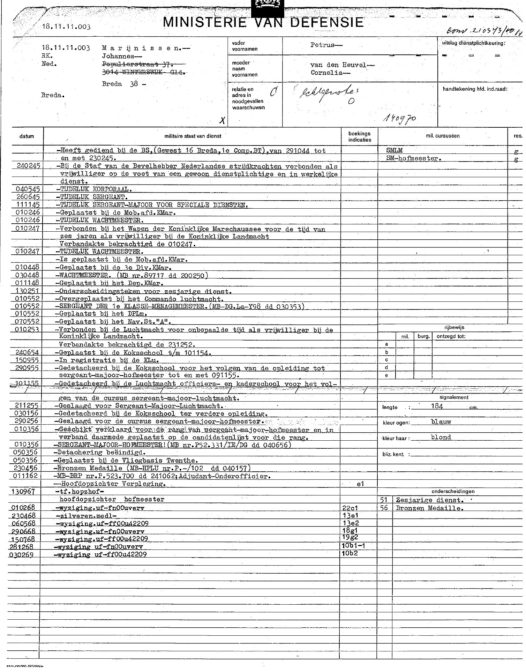 My grandfather passed away in a nursing home in Hengelo on 7 January 1990. We had just visited him a few days earlier on New Year’s Day. He was unusually talkative and we stayed longer than normal, enjoying our time together. A few days later, grandma appeared at our door to give us the sad news that grandpa had passed away. He was just 71 but had been in poor health for several years. 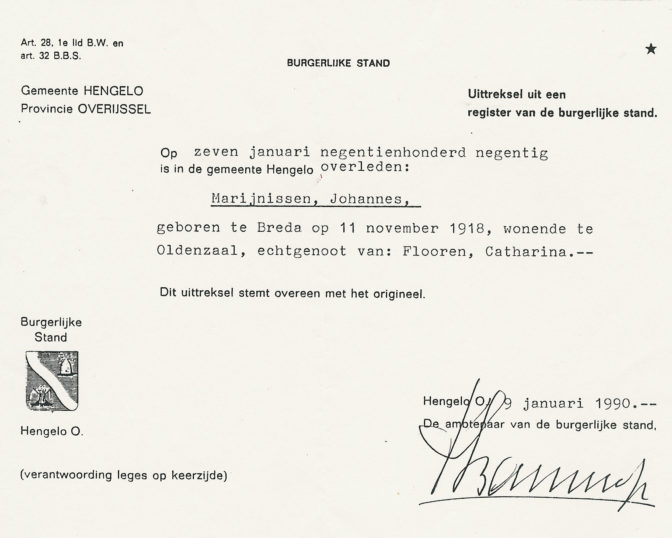 The certified extract of his death record shows he died in Hengelo on 7 January 1990, which matches my recollections. It shows he was born in Breda on 11 November 1918, and was the spouse of Catharina Flooren. The extract does not list his parents.8 The original death record may list his parents but that will only be public in 2041, after 50 years have passed, so the extract is all that is available to me.

One of the other records I have to confirm the information about his birth is his passport. It shows he was born in Breda on 11 November 1918, which matches the other records.9 The photo shows the grandfather I remember. He probably needed the passport to visit my grandmother’s sisters in the United States. I remember waving goodbye to them as they got on the plane. 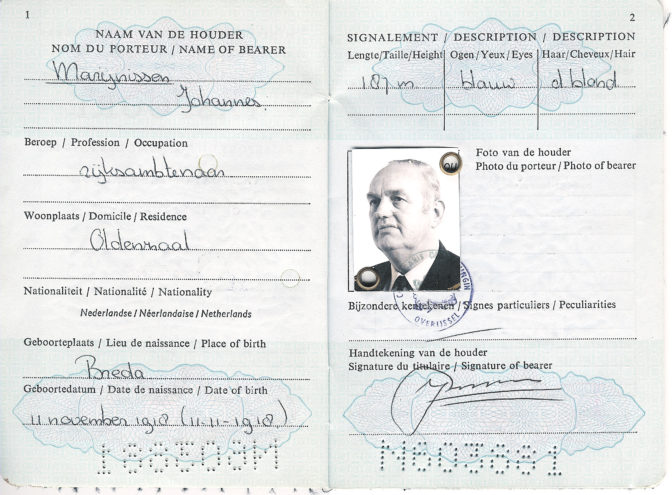 I also obtained a copy of his personal record card for personal use. It shows he was born in Breda on 11 November 1918 as the son of Petrus Marijnissen born 11 May 1897 in Terheijden and of Cornelia Francisca van den Heuvel, born in Breda on 2 June 1893.10

A combination of public and family records proves that my mother’s recollections about grandpa’s parents were correct. Johannes Marijnissen was born in Breda on 11 November 1918 as the son of Petrus Marijnissen and Cornelia Francisca van den Heuvel. All the records are in agreement.