Ethnicity estimates can vary between companies. They have different algorithms, different reference populations, and define different regions. To show you what Dutch DNA could look like with the various companies, here are my own results.

Based on my tree, I should be >99% Dutch, with a bit of German and French. I have some medieval lines from other countries in the 1200s and before, but the chances of me having inherited any of their DNA is minimal. My father’s side is from Gelderland, near the German border, and my mother’s from Noord-Brabant and Zeeland, near the Belgian border. So how did the companies do?

Companies fine-tune their predictions over time. This is the third article I’ve written about this. I left the previous ones online, so you can compare the current estimates to the ones in 2016 and 2018.

Ancestry thinks I’m 53% England, Wales & Northwestern Europe, 45% Germanic Europe, and 2% Swedish. The overview map shows the first category located in England and Wales, but if I click on that category, is shows a lighter area that includes the southern part of the Netherlands where my mother’s family is from. So although I find it weird for that part of the Netherlands to be lumped in with England and Wales, I can’t say it’s incorrect.

The Germanic European, which Ancestry thinks belongs to the genetic community Netherlands, is spot on. I don’t know where the 2% Swedish DNA came from, but that might be noise.

Interestingly, my mom has the same roughly 50/50 split between English/Wales/NW Europe and Germanic Europe, so it’s not like all of her DNA was responsible for one predicted ethnicity and my father’s ancestors on the German border were responsible for the other.

There is a big difference since 2018, when Ancestry had me as 94% Western European, and low confidence regions Great Britain (2%), Iberian Peninsula (2%), Ireland/Scotland/Wales (1%) and Scandinavia (<1%). The Iberian disappeared completely, but was marginal to begin with. 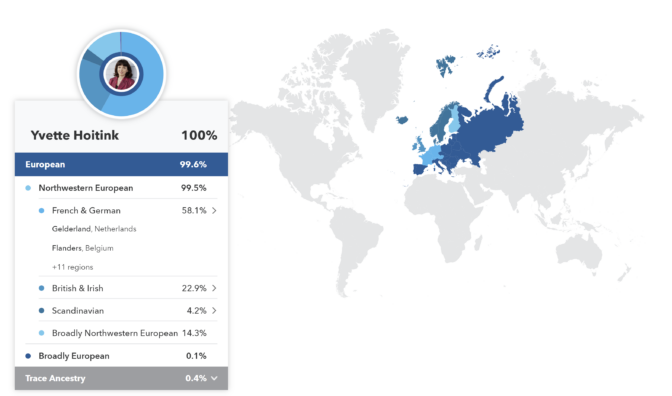 The French & German has gone up since 2018, which is good since according to my research that should be 100%.

If I click through to the regions for French & German, it identified Gelderland and Noord-Brabant as the top two positions. That is consistent with my tree. Color me impressed! I hardly have any known ancestors from North and South Holland, so I do not understand why they appear so high. Zeeland, no. 5 according to 23andMe, is in third place in my tree. 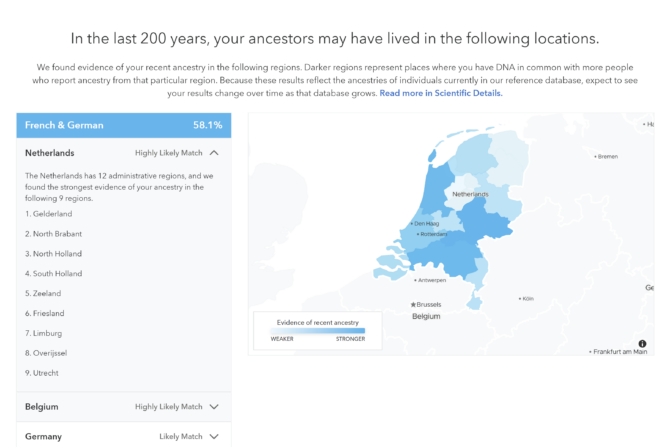 It also predicts I have ancestors from Flanders (more likely) and Walloon (less likely) in Belgium in the past 200 years, which does not fit my tree. But since my grandparents were born a couple of miles from the Belgian border, I think the Flemish prediction is not that far off.

For Germany, it predicts my ancestors likely came from North Rhine-Westphalia. I do indeed have an ancestor, Arend Kastein, who was born in Westphalia in 1817, just over 200 years ago. Several of his ancestors were from Westphalia too, as well as some other ancestors of mine further back. I don’t know of any ancestors from other parts of Germany, but these are less likely according to 23and Me.

All in all, 23andMe’s regional predictions are pretty impressive, in my opinion. It’s too bad about the large amounts of unexplained British. 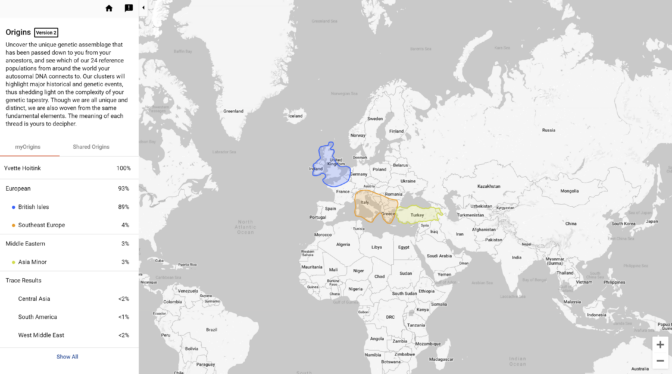 FamilyTreeDNA estimates me to be 89% British Isles, 4% Southeast Europe, 2% Asia Minor, with trace results <2% Central Asia, <1% South America, and <2% West Middle East. The results for the are the same as in 2018.

Like in the previous years, FamilyTreeDNA completely missed my West and Central European DNA, which it does detect in my mother (61%) and paternal uncle (59%). They both also have significant amounts of Scandinavian (15% and 29%, respectively), where I have none. This clearly shows a problem with their algorithm. My tree is >99% Dutch, which should be in the West and Central European ethnicity, so it is hard to understand why they fail to pick up any when they do find it as the largest ethnicity for my mother and paternal uncle. 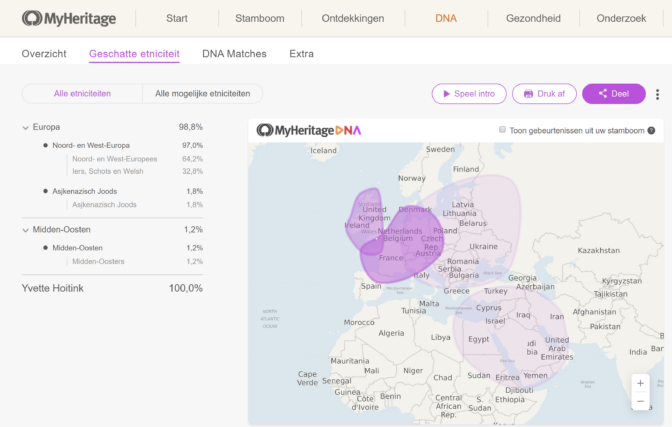 MyHeritage predicts me to be 64.2% North and West European, 32.8% Irish, Scottish, and Welsh, 1.8% Askenazi Jewish, and 1.2% Middle Eastern. The results have not changed since 2018. I don’t know of any Irish, Welsh, Jewish, and Middle Eastern ancestors. I have one Scottish mercenary soldier in my tree who arrived in the Netherlands in the early 1600s, but he alone cannot account for being estimated to be almost 1/3 Irish, Scottish, or Welsh. I’d love to be, but I’m just not. 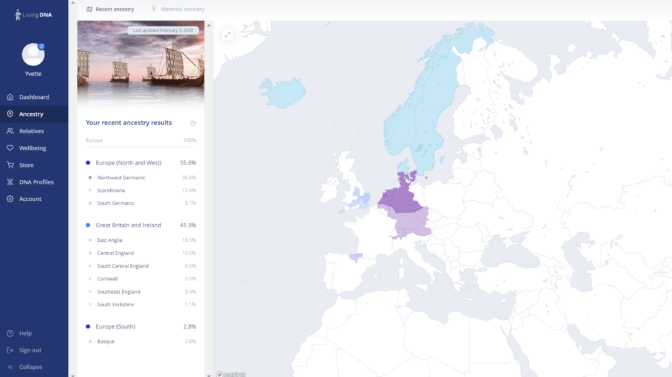 In terms of their categories, I should be >99% Northwest Germanic, so they’re pretty far from the mark. The 41.5% Great Britain and Ireland is way too high, and the subdivision into regions within England makes no sense. However, only 41.5% British is a huge improvement over the 2018 estimates, which had me at 94.4% British/Irish.

We can see from this table that all companies except FamilyTreeDNA and MyHeritage updated their estimates since 2018. This shows that it pays to go back to your results, since they change over time.

In general, I am more pleased with my results now than I was in 2018. I do feel like Ancestry is cheating a bit by lumping North-Western Europe in with England and Wales, which the other companies consider to be separate ethnicities. I think it’s impressive that Ancestry predicted I belong to the “Netherlands” genetic community, and that 23andMe not only picked the Netherlands as the most likely country of origin for my ancestors, but even pegged Gelderland and Noord-Brabant as my top provinces.

What these results show more than anything is that we should not treat them as gospel. Even people whose ancestors pretty much all come from the same country don’t get uniform results. We shouldn’t freak out if the ethnicity predictions don’t match our trees.

At the continent level, the predictions were solid. The companies all pegged me as 100% or near 100% European, which matches my tree. Below that, they all placed me in the North-Western part of Europe, though some thought I was more British than I am. At the lower levels, they become increasingly unreliable, which is easy to understand if we look at the migration history of Europe.

If I have to pick a favorite, it would have to be 23andMe, because they got the highest prediction of North-Western European or Germanic DNA (not counting Ancestry’s combined category) and got my top two provinces right. But Ancestry and MyHeritage also did well. LivingDNA suggesting areas in England that have no relation to my tree makes them less believable in my opinion, though they have improved since 2018. I think FamilyTreeDNA knocked themselves out of the competition by not detecting any of my West and Central European DNA. I look forward to seeing how these results improve over time.