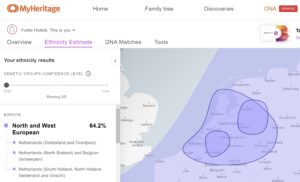 MyHeritage introduced Genetic Groups, a new way to predict your ethnicity. I manage four Dutch kits from people from four different parts of the Netherlands, and they're all spot on. For my own kit, it predicts three genetic groups with high confidence: Netherlands (Gelderland and Overijssel) Netherlands (North Brabant) and Belgium (Antwerpen) Netherlands (South Holland, North Holland, Gelderland and Utrecht). This is consistent with my tree: my father's ancestors are from … END_OF_DOCUMENT_TOKEN_TO_BE_REPLACED

Ethnicity estimates can vary between companies. They have different algorithms, different reference populations, and define different regions. To show you what Dutch DNA could look like with the various companies, here are my own results. Based on my tree, I should be >99% Dutch, with a bit of German and French. I have some medieval lines from other countries in the 1200s and before, but the chances of me having inherited any of their DNA is minimal. My father's side is from Gelderland, … END_OF_DOCUMENT_TOKEN_TO_BE_REPLACED 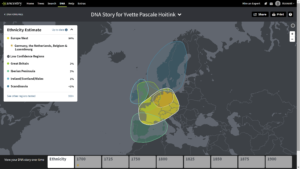 Many Dutch people taking a DNA test are surprised by the ethnicity predictions. Instead of Dutch, they're predicted to be French, German, English, or Scandinavian. When you think about the history of North-Western Europe, this is not surprising. The North Sea was the highway of the Middle Ages, with many people traveling for trade or pillage. During the great migrations, whole populations moved across the continent, leaving descendants in different places. And trade between the Netherlands … END_OF_DOCUMENT_TOKEN_TO_BE_REPLACED