MyHeritage introduced Genetic Groups, a new way to predict your ethnicity. I manage four Dutch kits from people from four different parts of the Netherlands, and they’re all spot on.

For my own kit, it predicts three genetic groups with high confidence: 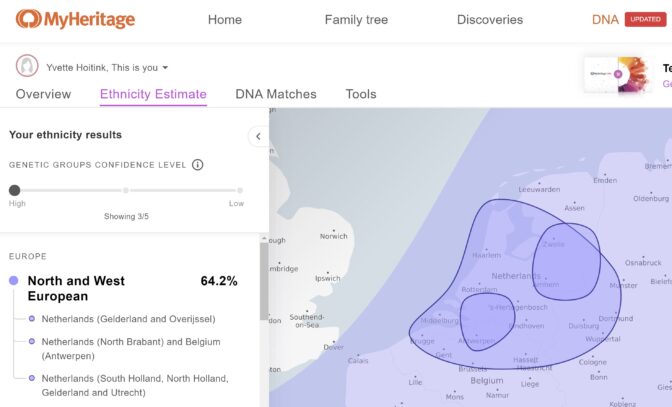 For the Dutch kits I manage, the Genetic Groups much more accurately reflect the known ancestry than the general ethnicity predictions, which often include large percentages of Scandinavian, English, and Irish, and even smaller amounts of Middle-Eastern or Jewish DNA, for which there is no other evidence.

How to get these genetic group predictions

If you have taken an autosomal test elsewhere, like at Ancestry, 23andMe, or FamilyTreeDNA, you can upload to MyHeritage for free. If you don’t subscribe to MyHeritage, there is a fee to unlock some of the advanced tools.

For information how other companies predict my ethnicity, see What Dutch DNA Looks Like – 2020 edition. I will write another update to that post in a year or so, when more companies have updated their algorithms.