The Museum voor Communicatie discovered an amazing treasure in their vaults: a box that belonged to a postmaster in the 17th century, filled with 2600 undelivered letters, 600 of which have never been opened.

The letters came to The Hague from France, the Southern Netherlands and Spain. Dr David van der Linden, from the University of Groningen, says: “The collection contains unique letters sent between Huguenot family members, evincing the emotional strains of exile and separation. These Huguenot letters point to the emotional toll that displacement and migration could take in the early modern period – and still does today.” The letters are in French, Spanish, Latin, Italian, Dutch and English and also include the official paperwork of the
postmaster. 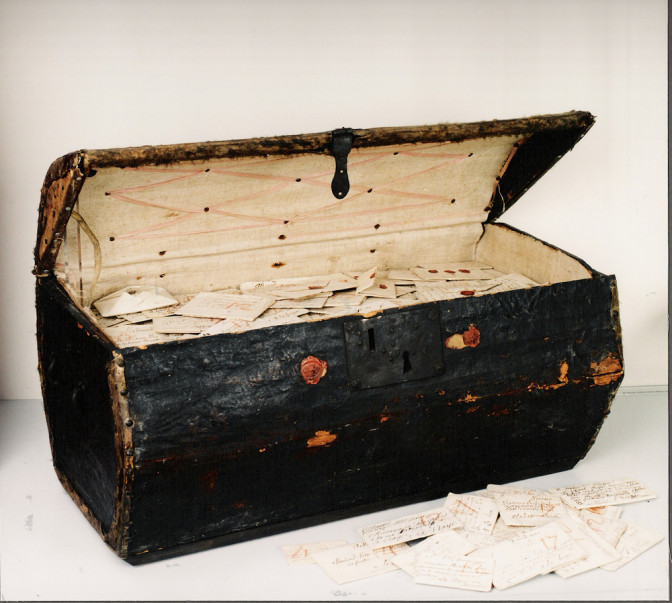 Postmaster in The Hague

The trunk belonged to Simon Veillaume, better known as Simon de Brienne (d. 1707), who arrived in The Hague from France in 1669. He was appointed as postmaster in 1676, responsible for delivering letters to and from France, the Southern Netherlands and Spain. He was a trusted servant of Willem van Nassau, the Prince of Orange, who came to England during the Glorious Revolution of 1688 and became King William III of England, Scotland and Ireland. De Brienne went with him and became Keeper of the Wardrobe at Kensington Palace in 1689, a post he held for ten years. He then went back to The Hague and continued to supervise the postal routes.

Some of the letters, he was unable to deliver. Maybe the addresses were wrong, or the intended recipient had left The Hague, perhaps emigrating to the New World. Maybe they could not afford the postage, which was then to be paid by the recipient.

Whenever the postmaster could not deliver a letter, he would toss it in the box, waiting for someone to come for it. The letters remained in the box, where many remained unopened for more than three centuries. The box founds its way to the Museum’s collection in 1926, where its contents were recently rediscovered. 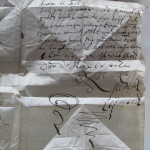 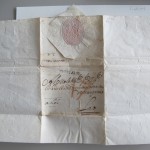 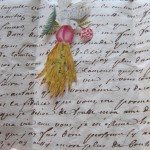 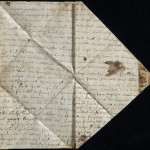 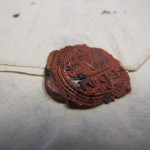 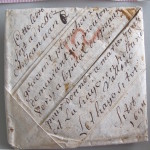 A team of researchers from the Universities of Groningen, Leiden and Oxford, MIT and Yale University will explore the contents of these letters in a project called “Signed, Sealed, & Undelivered.” Since The Hague was an important political hub in 17th century Europe, the letters will give a unique insight into what was happening during the “Golden Age.”

Advanced imaging technology called X-ray tamography is being used to scan the 600 unopened letters without opening them. The same technology was used to image the Dead Sea Scrolls.

The project will read, transcribe, translate and edit the letters. It will likely be years before the final results will be published. It will be exciting to see how many new insights this gives into life in the 17th century. Who knows, some of us may even find a letter written by or to one of our own ancestors! I will be following this project with interest and will report back to you when the results are available.

Thank you to the many readers of my newsletter who tipped me about this story. I appreciate your suggestions!