Before 1811, baptismal records are the main source for information about an ancestor’s birth date. Baptismal records should have been kept since the Trente council of 1545-1563, but for most areas they only survive since the early to mid 1600s.

Information in a baptismal record

In general, older baptismal records provide less details than more recent records. For instance, most 17th century records don’t provide the birth date, and often even the mother’s name is absent. The names of the witnesses can be vital clues, since witnesses were often close relatives.

How to find a baptismal record in the Netherlands

Baptismal records from before 1811 have been transferred to governmental archives as precursors of the civil registration. They are not found at the churches. The church records of baptisms, marriages and burials usually form a separate record group.

There is no nation-wide search engine to search for online baptismal records. Scans of many baptismal records are available at Familysearch. Some archives have created indexes or put higher-quality scans online at their own websites. Check the website Online Resources for Netherlands and Belgium for links.

Let’s take my ancestor Wouter Cantrijn as an example. I first encountered Wouter as the father of my ancestor Maria Cantrijn. She was baptized in Princenhage, Brabant, on 29 April 1779. Her parents were listed as “Walter Cantrijn uit Oudenbos” [Walter Cantrijn from Oudenbos] and Cornelia van de Laar.1

Wouter’s death record shows that he was 76 years old when he died on 17 November 1818 and identified his father as Nicolaas.4

The evidence from these records tells us that Wouter’s baptismal record can most likely be found in Oudenbosch, a village a few miles to the west of Princenhage, around 1742. The Digital Resources website shows that the baptismal records of Oudenbosch are available as index plus scans from the website of the Regionaal Archief West-Brabant.  A search for “Cantrijn” in the index located the baptismal record of a Wouter Cantrijn.5 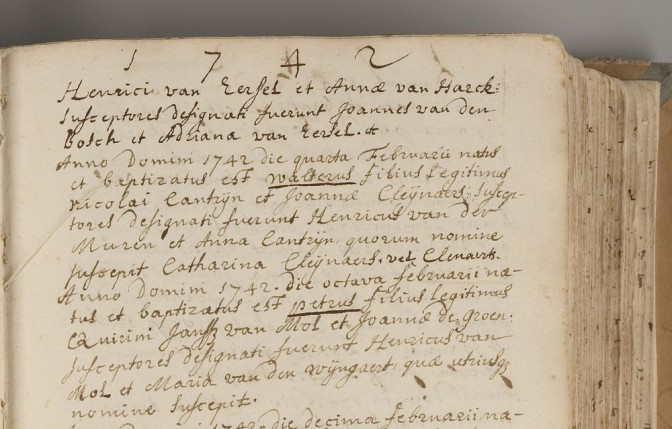 [AD 1742 on the fourth day of February is born and baptized Walter, legitimate son of Nicolaas Cantrijn and Joanna Cleijnaers, as sponsors were designated Henricus van der Muren and Anna Cantrijn, in whose name Catharina Cleijnaers, also named Clenaerts, presented the child for baptism.]

This has to be the baptismal record for my ancestor Wouter Cantrijn: 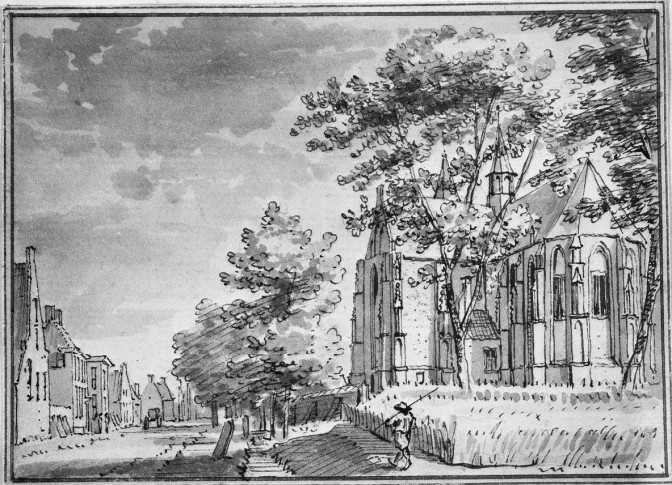 Using these same techniques, you should be able to find the baptismal records for your ancestors. Happy hunting!