FAQ About my Eleanor of Aquitaine Project

If you’re a regular reading of this blog, you will have seen my series about verifying my possible line back to Eleanor of Aquitaine. I have proven 27 out of 29 generations so far. Many people have contacted me or left comments saying they love the series and seeing all the different records. Thank you for doing that; it’s a great encouragement for me.

Some questions come up repeatedly, so I thought I’d write a blog post with answers to the Frequently Asked Questions about the project.

I originally found the line back to Eleanor in a range of reliable and not so reliable sources. The generations before 1500 AD especially were not based on research in original records, but on published genealogies, online trees, correspondence with other genealogists, and discussions on mailing lists.

The goal of the project was to see how many of the generations could be proven according to the Genealogical Proof Standard, which includes doing reasonably exhaustive research, analyzing the best quality evidence available. That means I don’t rely on other people’s work but go back to the original records and draw my own conclusions.

But I already had a line to follow and prove, so I did not just randomly go from ancestor to ancestor in the hopes of ending up at Eleanor.

Grave of Eleanor of Aquitaine at Fontevrauld Abbey

Did you know you’d get this far?

When I published the first blog post, several links were considered unproven or hypothetical by prior researchers, that I have since managed to prove. I had my doubts about whether I would be able to prove the parents of Barbara Pijlijser (generation 17) and did not even know the name of the mother of Jan van Wijfliet (generation 20) when I started though I had a good theory about his grandfather, also named Jan van Wijfliet (generation 22). I hoped, but was not convinced, I could get past those hurdles. But I did! I’ve now proven 27 generations with just two more generations to go!

How is COVID-19 affecting your project?

For the first 20 generations, I published one blog post/generation per month. But the further back I got, the more time-consuming each generation became, for different reasons:

I had been to Belgium to do on-site research twice when COVID-19 hit and archives and borders closed. Thankfully, I had photographed relevant records during those trips that I could then use from home, but I still had to pause the project because I did not have enough evidence to consider the links proven. Then I discovered the wonderful website Diplomata Belgica that has a search engine for charters in Belgium up to 1250, often including links to the images. Combined with the National Archives of Belgium‘s decision to make some of their scans available online instead of just in the reading rooms, that has allowed me to continue the research from home.

Since then I have been able to publish three more generations:

As discusssed in the blog post for her daughter, Marie of Champagne (generation 27) is the daughter of the Count of Champagne. I do not yet know if I will be able to prove her parentage without going to France. I have found some useful French websites and have bought several publications about the Counts of Champagne, but don’t know if I will be able to find enough original records with good enough evidence to meet the Genealogical Proof Standard. We will have to wait and see!

Did you read the original sources?

Many people have asked me if I actually read the original sources I have as images in the blog. Yes, I do. For the earlier records, publications often exist, either in the form of abstracts, transcriptions, or translations. I use these first, to know which sources might contain relevant evidence. Once I identify a useful source, I then get the original and read that to verify the information in the publication to make sure it is correct and to see whether it has more information.

So far in the project, I have used sources in Dutch, French, Latin, English, German, Middle Dutch, Middle English, Middle French, Italian and Spanish. It’s a good thing I know my languages!

I also try to research the reliability of the records. For example, sometimes fake charters were created to document donations or land transactions that never happened. I don’t just study the charters, but also study literature about these charters, such as charter books, created by diplomatic [relating to charter] specialists who analyzed them for correctness. For chronicles I try to find literature discussing the reliability of the chronicler. This is not my expertise so I build on the experience of others for that part of the research. 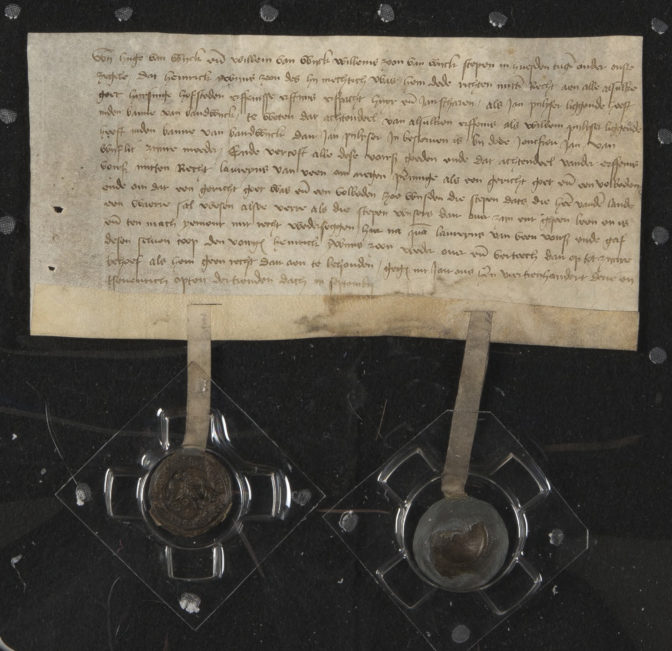 What is special about the project?

Several people told me that it’s nothing special to descend from Eleanor of Aquitaine, since she has millions of living descendants and appears in many trees. They ask me what makes my project different from all the thousands of online trees that feature Eleanor as an ancestor.

The answer is simple: the level of proof. I have never seen anyone document their line back to Eleanor of Aquitaine according to modern standards. Especially for the early generations, I have not encountered any publication that went back to the original records. Some come close, like Medieval Lands, but even they rely on published sources rather than original records, and often use chronicles that are not contemporary. I think using original contemporary records where available sets my project apart from other people’s projects. If you know of another project that documents these early lines according to modern standards, I would love to hear about it!

Will there be a book?

At this point, I do not have any plans to publish the research in book-form. I chose to publish the line on my blog to get a wider audience and give everyone access to the information. Creating a book would be a lot of work, also because the images are optimized for the web, not print, so just getting those right would take a lot of time. I am not ruling anything out, but have no plans to turn it into a book.

I will be using the blog posts for different purposes though. I have already used one of the blog posts as part of my renewal portfolio for my certification with the Board for Certification of Genealogists. Every five years, I have to submit samples of my work to show my work still meets standards. I thought this series was a good example of what I’ve been doing. I will also be using the blog posts to update this line in the FamilySearch Family Tree, a collaborative online tree. Getting good documentation for the early generations will benefit many people. I know others can delete and change what I do, but I hope that providing good documentation will help to get the correct information out there.

Several people have asked me what I will do once the project ends (either proving or disproving the line back to Eleanor). I have not decided yet. I may try to trace her line back further in time or I may trace another line. I enjoy discussing all the evidence for one parent-child relationship per blog post so don’t think this will be the last series.