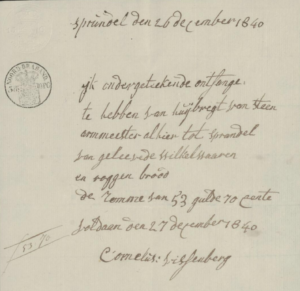 Several of my ancestors were poor. Some were so poor that they relied on charity. I have found several of them in the records of charitable organizations, such as the deacons of protestant churches, Holy Ghost tables of catholic churches, and civil poor administrations. When I went through the records, I also found ancestors who were not poor; in other capacities. These sources include many names besides the people needing poor relief: Officials, such as the deacons, Holy Ghost Masters, … END_OF_DOCUMENT_TOKEN_TO_BE_REPLACED

If you are searching for an ancestor's origins before 1811, it might be worthwhile to check the town registers to see if they submitted a bond letter. This is a certificate given out by their previous place of settlement that indemnifies the new town in case the person becomes poor. The old place of settlement promises to support them. If you find a bond letter, this will tell you where they came from. … END_OF_DOCUMENT_TOKEN_TO_BE_REPLACED