A vrijstelling is an exemption. You may come across the term in military enlistment registers or marriage supplements, if a person was vrijgesteld [exempted] from military service.

When Antonie Gommeren married Adriana Timmermans in Etten-Leur on 27 January 1828, he had to prove he had fulfilled his military duties. He submitted a certificate of National Militia that included the text “uit hoofde van ligchaamsgebreken finaal vrijgesteld” [received a final exemption for reason of bodily defects]. The “final” means that he did not have to be reexamined the next year, which is what they would do with temporary conditions or if someone was too short. His physical description gives a clue: it shows he had a maimed hand, which is probably the reason for the exemption. His signature is clear, so it must not have been his writing hand. Unfortunately, the enlistment registers for his year did not survive, so I cannot check that for more details, but thanks to the marriage supplements, we will know that he did not serve and why. 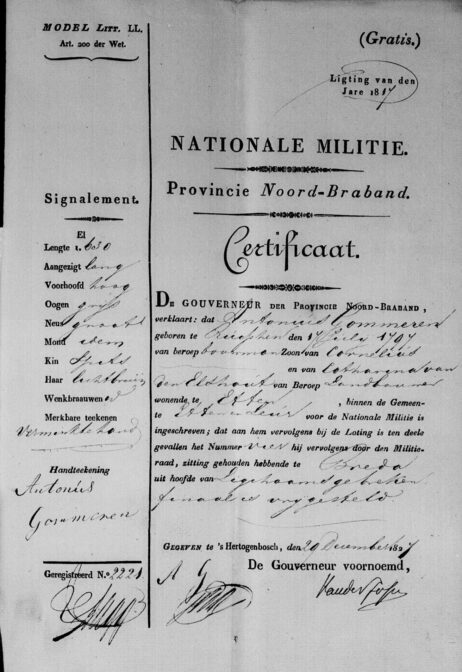