This is the twelfth post in a series about my possible line of descent from Eleanor of Aquitaine. In the first post, I explained how I discovered the possible line, and how I am going to verify it one generation at a time. In the last post, I proved that my seventh great-grandmother Petronella van Vlijmen was the daughter of Hugo Dirck Huijgen and Jenneken Laureijs Denis Peeters.

The research to prove the parents of Petronella van Vlijmen already found some sources about Jenneken Laureijs Denis Peeters:

These records will be analyzed for clues about Jenneken’s own parents.

The name of the father who assisted her matches the patronymics of Jenneken, both providing direct evidence about the identity of her father. The string of patronymics identifies him as Laureijs, son of Denis, son of Peeter. A last name is not given—not unusual in this time and place. 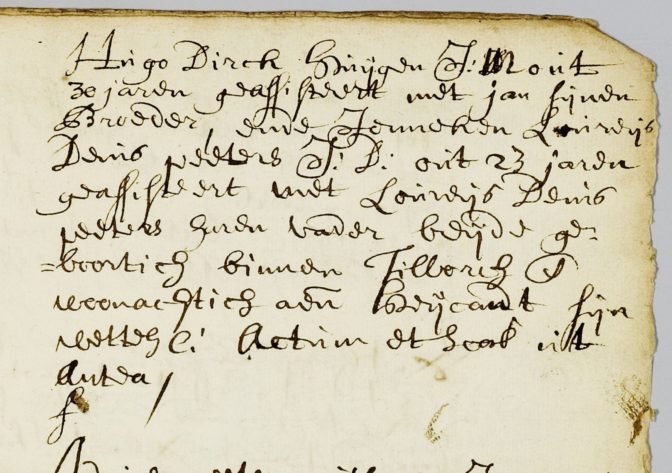 This Hugo Dirck Huijgen and Jenneken Laureijs Denis Peters had a total of seven children, all baptized in Tilburg:

The mother is identified as Joanna, the Latin form of Jenneken.

Daughter Laurentia may have been named after Jenneken’s father Laurens. “Lafferijns Denis Peters,” living at the Heikant, had been buried in Tilburg on 5 February 1684, a month before Laurentia’s baptism.9 Naming a child who was born just a few weeks later after him would be a normal thing to do. Dionisius (Latin form of Denis) may have been named after her grandfather.

In 1688, the Council of States required all places to enumerate the population. The list for Tilburg shows that Huijgh Dirck Huijgen was the head of a household consisting of two adults and three children below the age of sixteen.10 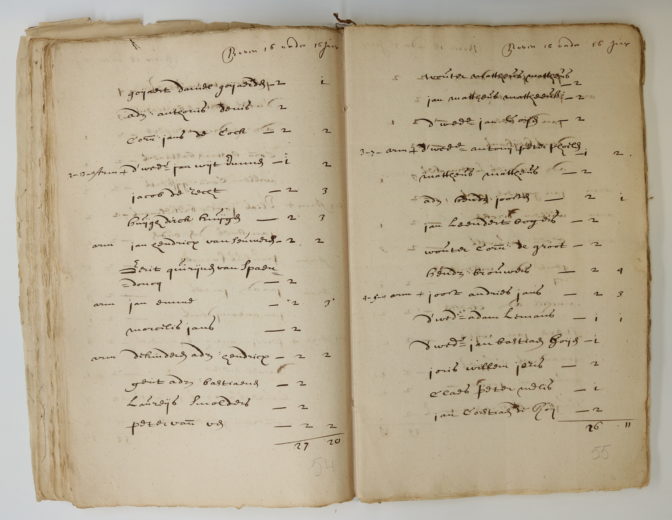 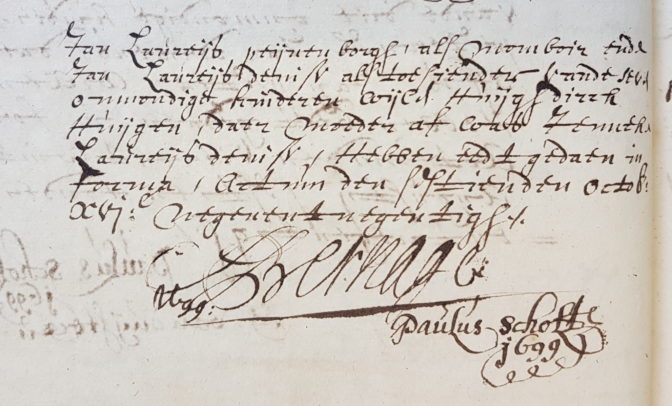 Based on his patronymics, the supervising guardian Jan Laureijs Denissen was probably a brother of Jenneken; a logical choice for the role.

The number of seven children matches the information from the baptismal records, which suggests that none of the children died in infancy. However, that is inconsistent with the number of children in the 1688 census which showed three children under the age of sixteen while five children had already been baptized then. It is possible that there were other children whose baptisms weren’t found, or that the census recorded the wrong number of children—perhaps because the information had been collected earlier than 1688.

“Huijgh Dircken vrouw” [Huijgh Dircken’s wife] was buried in Tilburg on 19 November 1694. The burial record shows she lived in the Heijkant district of Tilburg and left children.12

Hugo and Huijgh are variations of the same name. No other Hugo Dircken was found in Tilburg in this period, so this burial is probably for Jenneken Laureijs Denis Peeters. The burial record does not provide any other identifying information nor information about her parents.

A search of the Tilburg baptismal records turned up only one Jenneken, daughter of Laureijs Denissen or variations. According to the Latin baptismal record, Joanna [written as Joa with an abbreviation mark above the a], daughter of Vreijs Denis and Anna was baptized in Tilburg on 6 February 1654. Witness was Maiken Aerts in the name of Lijken Jans.13

Joanna is the Latin form of Jenneken and Vreijs is a variation of Laureijs so the names of the child and her father are consistent with the bride in the 1678 marriage record. Her age of 23 years old at the time of the marriage also matches.

The repetition of the names Maria (3x) and Petrus (2x) suggests that several of these children died as infants. Joannes, or Jan in Dutch, could be the supervising guardian from the 1699 record. Her oldest brother would be a logical choice.

Marriage record of the parents

One marriage of a groom named Laureijs Denis to a bride named Anna was found. Laureijs Denis Peeters married Anneken Cornelis Peeters on 8 February 1654. He was from Heijcant, a hamlet in Tilburg.15

Joanna/Jenneken was baptized nine months later. Jenneken was also from Heikant according to her own marriage record.

Guardianship record of the parents’ children

The mother is here called Anneken Cornelis Coijen, while her marriage record called her Anneken Cornelis Peeters. In this time and place, it was not uncommon for people to be called by their patronymics in one record, and by a last name in other records. Her first name and first patronymic (Anneken Cornelis) match, as do the first name and both patronymics of the husband. This combination proves that this is the same couple. The fact that she was listed as the mother of the children in 1684 shows that Laureijs’ children all had the same mother.

Supervising guardian Huijgen Dirrick Huijgen was Jenneken Laureijs Denis Peter’s husband, whom she married in 1678. Jan was the oldest surviving brother. Jan and Jenneken were the only children over 25, the age of majority. The presence of Huijgen Dirrick Huijgen as supervising guardian of the children of Laureijs Denis Peeters and Anneken Cornelis Coijen is indirect evidence that his wife was their daughter Joanna/Jenneken. 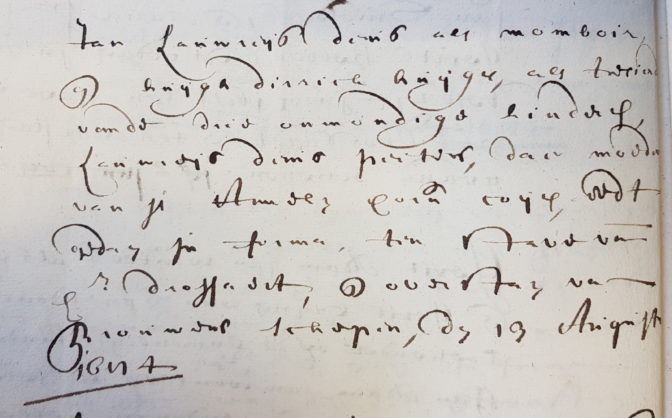 Estate division of the parents

On 4 January 1699, the children of the late Laureijs Denisse and the late Anneken Cornelis Koijen came to an agreement about their inheritance. The children named in the record were:

Huijgh Dirick Huijgen received a plot of farm land near the Moerstraet at the Heijkant in Tilburg as his children’s share of the inheritance.17 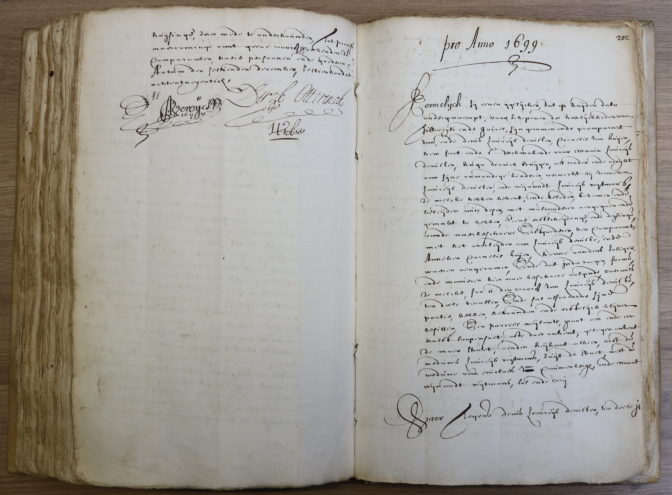 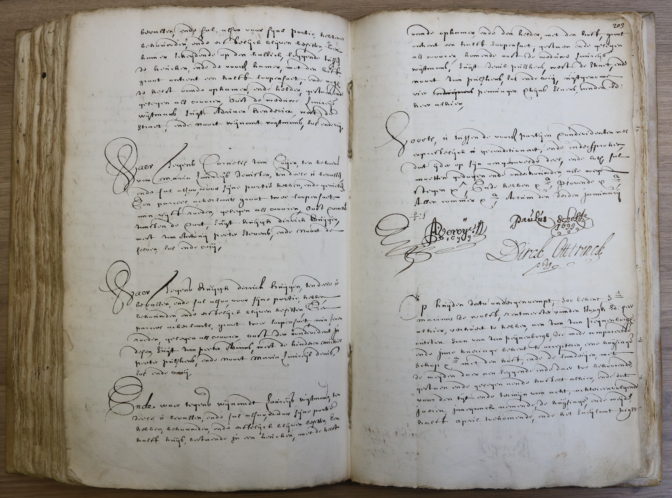 Purchase of a house

A charter from 17 August 1682 documents the sale of the backside of a house and land in the Heikant in Tilburg by Jan Dirck Huijgen to his brother Huijgh Dirck Huijgen. The neighbors of the property are given as east: the purchaser [Huijgh Dirck Huijgen], south: Peter Jan Joosten, west: the widow Denis Peter Anthonis, and north: Jacob Jansse de Recht.18

This shows that the Van Vlijmen family lived next-door to the widow of Denis Peter Anthonis. The first name and patronymic of the widow’s late husband match the patronymics of Jenneken’s apparent father Laureijs Denis Peters, suggesting the neighbor might be her grandmother. 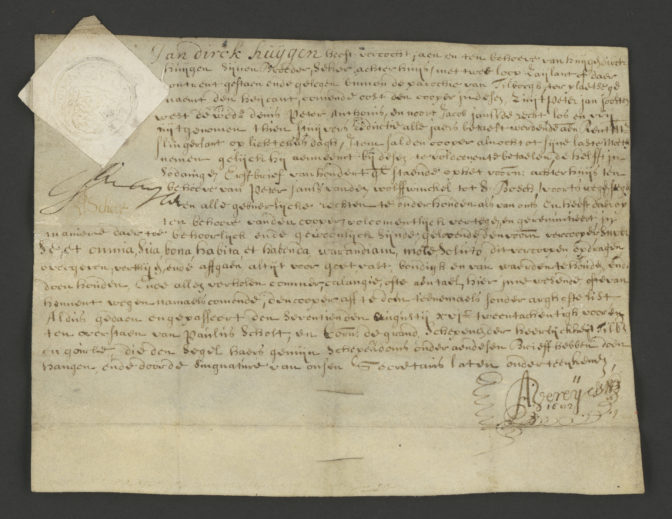 Denis was baptized in Tilburg  under the Latin version of his name as Dionisius, son of Laurentius Denisen and Anna, on 16 February 1667.21 He must have been one of the minor children of Laureijs Denis Peters and Anna Peters Coijen of whom Huijgh Dirck Huijgen was the supervising guardian in 1684. Not having reached the age of 25 when he married in 1690, he would have needed to have a guardian present.

The analysis for this generation shows that research in this area in the 1600s requires a wider range of sources. Church records in this period don’t always identify both parents. Court records such as guardianship appointments or estate divisions are an important source of information about family relationships. Combining evidence from church and court records can prove relationships even when names are not used consistently.

That is eleven generations down, seventeen to go!