This is the seventeenth post in a series about my possible line of descent from Eleanor of Aquitaine. In the first post, I explained how I discovered the possible line, and how I am going to verify it one generation at a time. In the last post, I proved that my twelfth great-grandmother Barbara Peter Goijaert Pulskens was the daughter of Peter Goijaert Pulskens and Claesken Peters die Paep.

These records and others will be analyzed for evidence about Claesken’s parents.

On 16 May 1595, the children, grandchildren, and great-grandchildren of the late Peter Goijaert Pulskens, which children Peter had procreated with the late Niclaesken his housewife, daughter of Peeter Spapen, divided their inheritance.1

First page of the 1595 estate division

On 13 November 1581, the heirs of Willem, son of Peeter die Paep sold the house they inherited from him. His heirs were:

This record indicates that Peter die Paep had the following children:

On 13 March 1592, Jan son of the late Jacob Jan Gooskens, as husband of his wife Digne, daughter of the late Peter Goijaert Pulskens, of whom the mother was Claesken daughter of Peeter Papen, sold a house and land in Tilburg. Neighbors include Michiel Gielis Wagemakers and Willem Laureijs Willemssoon.3

Michiel Gielis Wagemakers and Laureijs Willemssoon were among the heirs of Willem Peters die Paep in 1581. This suggests that the property sold by Jacob Jan Gooskens and Digne came from her mother Claesken Peters die Paep’s side of the family. 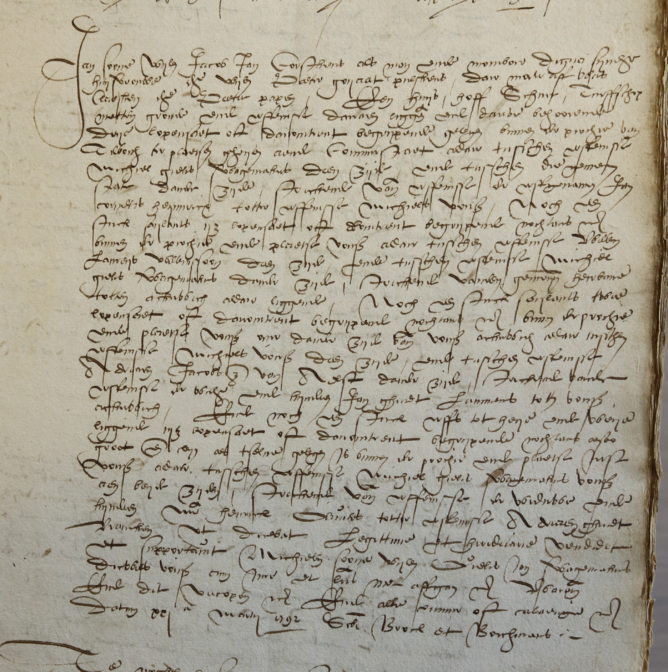 A record from 1532 identifies Peter die Paep as the father of Claesken.

Jan son of the late Dierck Tielmans, as husband of Anna daughter of Peter die Paep transported to Willem and Jan, brothers, Claes and Jenneke, sisters, children of Peter die Paep and to Ansem, son of the late Ansem die Leeu, all rights to the inheritance that Jan standards to receive as guardian of his wife from Peter die Paep, his wife’s father. And also all all real estate, that Jan now owns until the time that shall relieve Willem with his brother and sisters from the thirty guilders, and to which end said Jan will pay the annual tax, so that Willem and his associates aren’t diminished by that.4

This record names Peter die Paep with his children:

The names of these children perfectly match the 1581 sale by the heirs of Willem Peters die Paep.

Claes is a variation of Claesken. This record names her with her father and brothers and sisters, explicitly referring as Jenneken and Claes as sisters. The absence of husbands for Claes and Jenneken, while one was mentioned for Anna, implies that the first two sisters weren’t married yet. Since most women married in their mid to late twenties, and Claesken had five children making it unlikely she was in her mid thirties or older when she married, this gives us an estimated birth year for Claesken of between say 1500 and 1510.

Son Willem must have died without issue for his siblings to be his heirs in the 1581 sale record.

A hard to read record from 7 January 1499 identifies Peter the son of Claes Spapen as the husband of Barbara his wife, daughter of the late Willem Pillysers.5

This record predates the estimated birth year of 1500 to 1507 for Claesken. Peter and Barbara could have been her parents. “Pillysers” is a spelling variation of the name Pijlijser, as it is more commonly written.

The record appears in the 1498-1499 general protocol of Tilburg, one the oldest registers of this court to have survived. 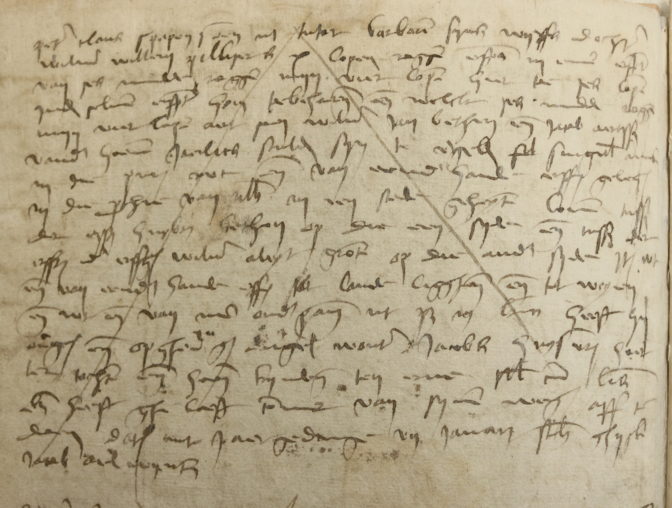 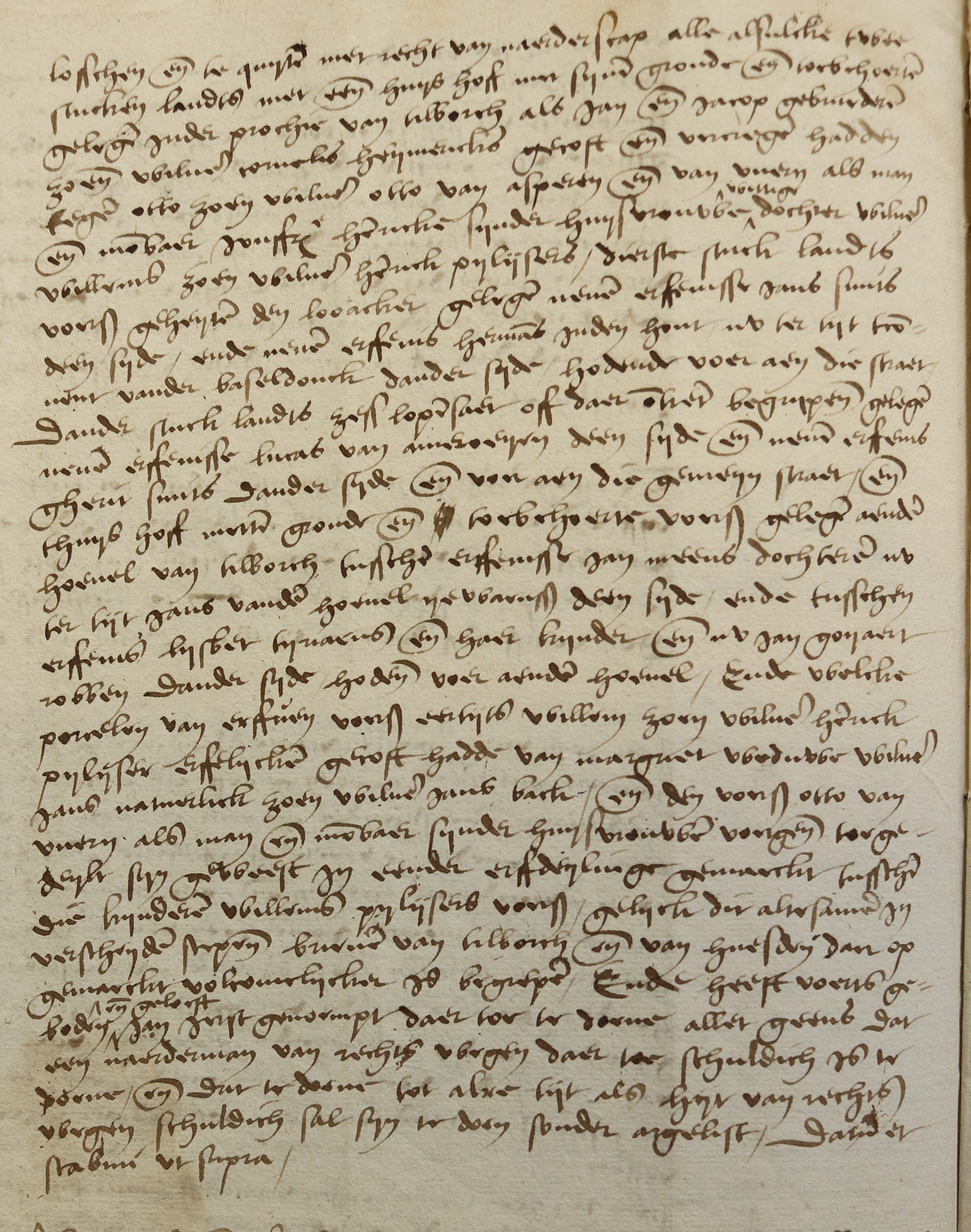 The identity of the father of Barbara Pijlijser and the implications of this kinship claim will be discussed in more detail in the next blog post.

This record identifies Jenneken as the daughter of Peter Claeus die Paep and Barbara, with a kinship connection to the Pijlijser family. Her mother has to be the same Barbara, daughter of the late Willem Pijlijser mentioned as the wife of Peter son of Claes Papen in the 1499 record. The blank where the father’s name should be has to be one of the more frustrating finds in my genealogical career!

The 1532 debt record named Claesken and Jenneken as sisters and daughters of Peter die Paep. The record did not mention that they were half-siblings, implying they were full sisters.

The 1581 record told us that Claesken and Jenneken were both heirs of Willem son of Peter die Paep. The customs of the district of ‘s-Hertogenbosch, of which Tilburg was a part, said that half siblings only inherited if there were no full siblings:

Claesken had a daughter Barbara (generation 15), the wife of Denijs Laureijs Willem Colen. We know that Barbara Willems Pijlijser died before Peter die Paep, since the 1547 record did not name Jenneken’s father as the late Peter, but named her mother as the late Barbara. The 1532 record only refers to the future inheritance from father Peter die Paep, suggesting that the mother could have died already.

Since Claesken was apparently unmarried in 1532, it is likely that mother Barbara died before Claesken’s daughter was born. In this time and place, children were traditionally named after deceased relatives. Claesken would have named a daughter after her deceased mother, which explains the choice of “Barbara” for her child.

Claesken Peters die Paep and her husband Peter Goijaert Pulskens did not have a known son Peter, which is consistent with her father Peter die Paep still being alive in 1547. If he died after they had their last son, they would not have named a child after him.

Claesken herself was apparently named after her paternal grandfather, since Peter die Paep’s patronymic was Claes.

No source explicitly names the mother of Claesken Peters die Paep. Several court records mention her as the daughter of Peter die Paep. One record from 1499 identifies Peter’s wife as Barbara Willems Pijlijser, showing they were married before the 1500-1510 estimated birth year of Claesken.

Claesken Peters die Paep had a full sister named Jenneken: they were mentioned as sisters in a record about a debt and jointly appeared as heirs of their brother Willem. Jenneken was identified as the daughter of Peter die Paep and his wife Barbara, implying that Claesken must have been their daughter too.

Claesken named a daughter Barbara, apparently after her mother. No evidence was found that Claesken had other parents. The combination of this evidence proves that Claesken Peters die Paep was the daughter of Peter Claes die Paep and Barbara Willems Pijlijser.

This gets us back to the 1400s, over five hundred years ago. These past few generations have relied heavily on court records, that conveniently list multiple generations in one record. These records are not available in Tilburg before the 1490s, but go back further in time for some of the surrounding jurisdictions that may have recorded information about Barbara Willems Pijlijser and her ancestors.

Next up: Generation 17 – Barbara Willems Pijlijser