This is the sixteenth post in a series about my possible line of descent from Eleanor of Aquitaine. In the first post, I explained how I discovered the possible line, and how I am going to verify it one generation at a time. In the last post, I proved that my eleventh great-grandfather Laureijs Denis Colen was the son of Denijs Laureijs Colen and Barbara Peter Goijaert Pulskens.

These records will be analyzed in more detail for information about the parents of Barbara.

In 1595, the following heirs appeared before the court of Tilburg to divide the estate of Peter Goijaert Pulskens and Niclaesken Peter Spapen: 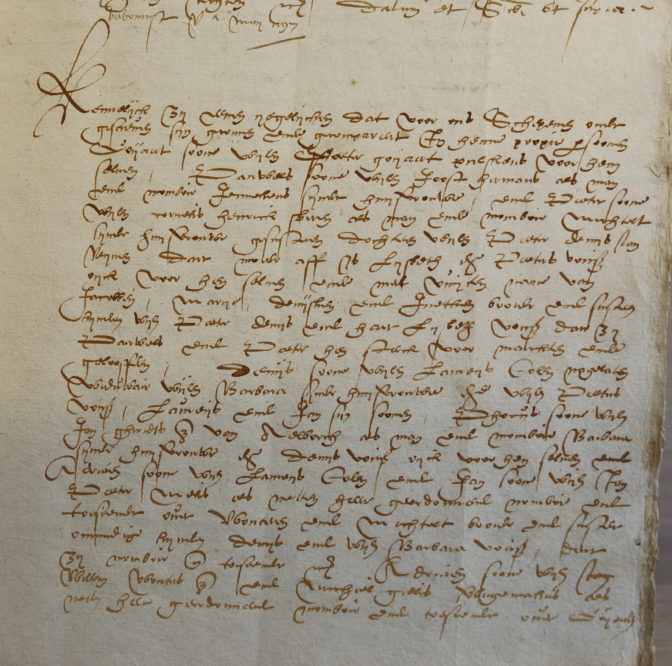 First page of the 1595 estate division, identifying the heirs

This long list of heirs shows there was a Peter Goijaert Pulskens who was married to Niclaesken daughter of Peeter Spapen, who had the following children: 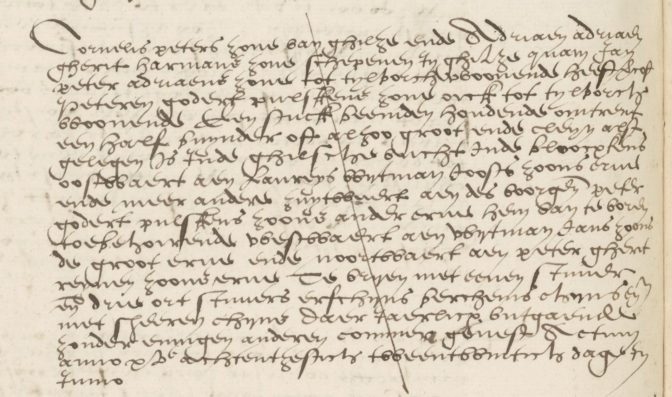 On 21 June 1605, Laureijs, Jan, Wouter, sons of the late Denijs Laureijs Colen, their sister Barbara, married to Foock Janssen, and sister Neelken, wife of Adriaen Adriaensen, sold a field in the Ghilze Vlucht in the “Bleijck”.3 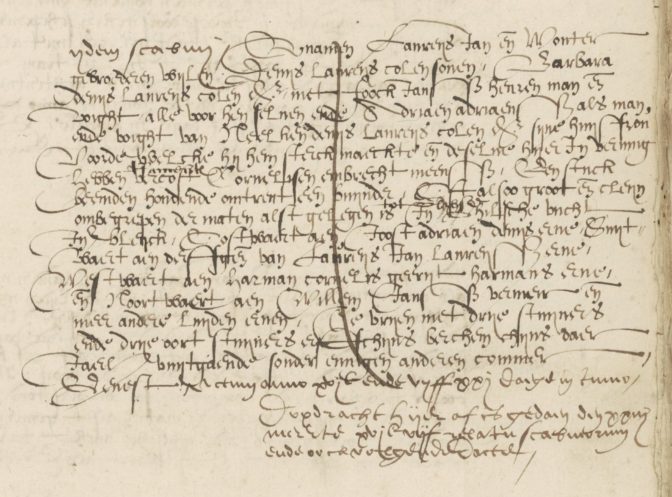 Comparison of the neighbors in these two records to the description of the land inherited by Denijs Laureijs Colen from Peter Goijaert Pulskens shows overlap:

A 1595 sale by Lijsbeth, daughter of Jan de Groot to Willem Jansen Vermeir, with Peter Godert Pulskens as neighbor, explains the transfer from De Groot to Vermeir.4 No records were found showing how the land transferred to Joost Adriaen Denijs, Laureijs Jan Laureijssen, or Herman Cornelis Gherit Hermans.5

Even though no sales records could be found linking all the 1568 neighbors to the 1595 and 1605 neighbors, the overlap in location and neighbors implies that this is all the same land, providing independent verification of the information in the 1595 estate division.

The Tilburg tax register of 1575 has the following people enumerated next to each other in the Heijdsijde district: 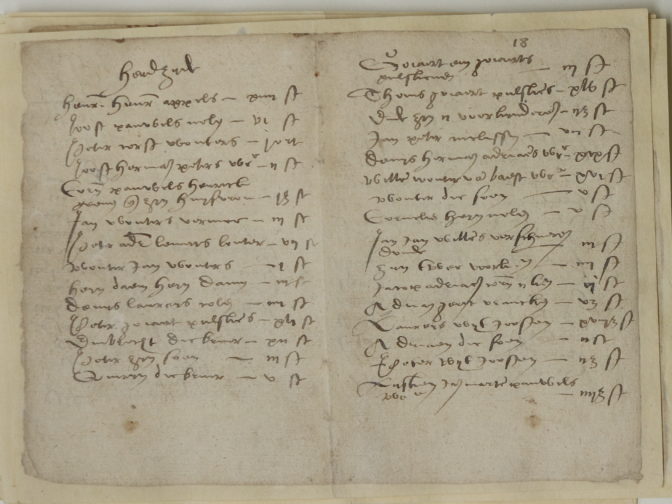 In 1580, the tax register records the following people were recorded next to each other, also in Heijdzijde: 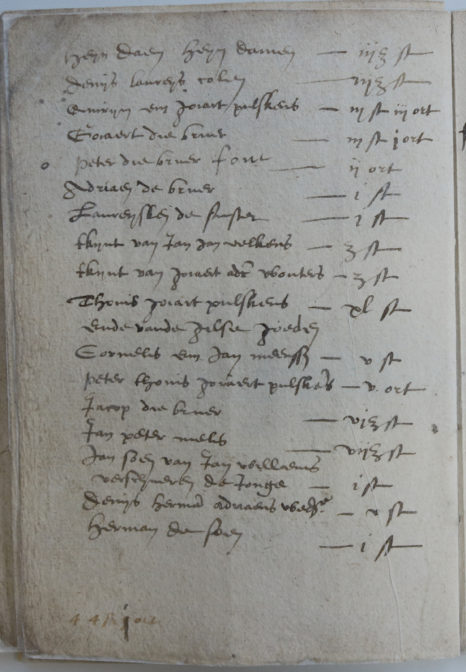 These two records show that Denis Laureijs Colen, the husband of Barbara Peter Goijaert Pulskens, lived next to her father in 1575. Her father was not mentioned in 1580, nor is there an obvious indication who now paid the 12 “stuivers” [1/20th of a guilder] tax on his land. 1575 is the earliest surviving tax record, so the property cannot be traced back further using this series.

In 1589, he was sued by Jan and Adriaen, the sons of Geerardt Adriaen Beijkens, over payment of a tithe to the Holy Ghost Master [poor relief] of Oisterwijk.12 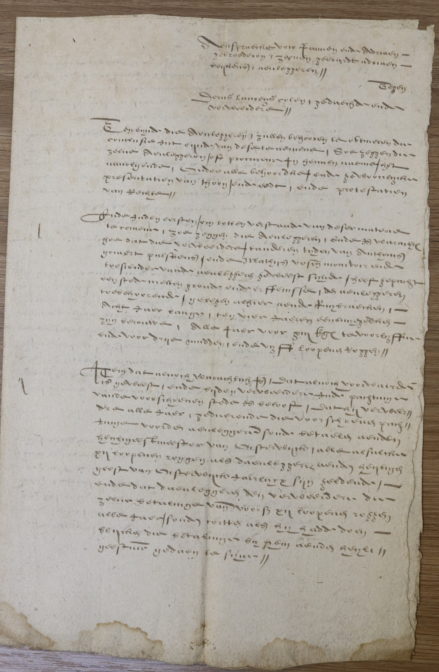 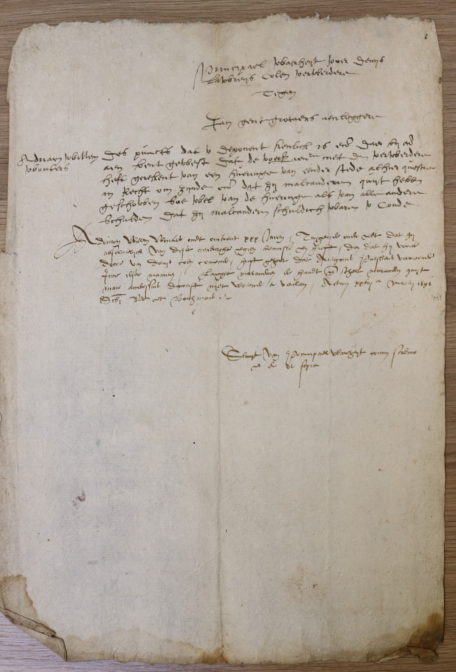 Unfortunately, neither suit mentioned the name of Denijs’ wife or parents-in-law, or the location of any of the real estate involved in the suits, which may have provided more (indirect) evidence of the identify of Barbara’s mother.

Barbara and Denijs apparently did not name any children after her parents: none of the records mention a son Peter or daughter (Ni)claesken.

The 1595 record identifies the following children:

The age of majority was 25, so Wouter and Mechtelt must have been born after 1570 and Laureijs and Jan before 1570. Since children could marry before the age of 25 with parental consent, we don’t know if Barbara was of age.

Assuming a maximum span of twenty years (normal fertility of mother) and about two to three years between children, this gives the following estimated birth years for the children:

It is possible the oldest children were born earlier, if there were more children in between who did not live until the estate division of 1595.

We know that Claesken died before 1581, when Peter appeared as her widower, and that Peter died between 1581 and 1592, when he was referred to as the late Peter son of Goijaert Pulskens.15 Peter died after Barbara and Denijs’ last son was born, and Claesken could have died after their last daughter was born. Alternatively Claesken could have died earlier and a child was named after her, but the child did not survive until 1595.

If Barbara and Denijs followed the local custom to only name children after deceased relatives, that explains the absence of the names Peter and Claesken among the children. Had there been a son Peter, that would have suggested that the Peter who was alive in 1581 was not the father of Barbara.

Dispensations were common in Brabant in this period. In his article about forbidden degrees of relationships in Brabant, L.J.F. Adriaenssen estimated the average number of relatives within the forbidden degrees at 640.16 Even in a larger village like Tilburg, that would have left few marriage partners of similar age and status. Dispensations would have been necessary for a significant number of marriages.

The original dispensations for this area are kept in the archives of the diocese of ‘s-Hertogenbosch. Their archives are closed to the public for an undetermined period.18 If a dispensation was issued, evidence for it cannot be obtained at this time.

The 1595 estate division of the inheritance left by Peter son of Goijaert Pulskens and Niclaesken daughter of Peeter Spapen identified Barbara, the late wife of Denijs son of the late Laureijs Colen as one of their daughters, providing direct evidence for the identity of Barbara’s mother. No evidence was found that her mother was someone else.