Was Eleanor of Aquitaine my Ancestor? Generation 14 – Laureijs Denis Colen

This is the fifteenth post in a series about my possible line of descent from Eleanor of Aquitaine. In the first post, I explained how I discovered the possible line, and how I am going to verify it one generation at a time. In the last post, I proved that my tenth great-grandmother Aleid Laureijs Colen was the daughter of Laureijs Denis Colen and Catharina Jan Adriaens Smolders.

Research into Aleid’s parents already turned up several records about her parents:

These records will be analyzed for evidence of Laureijs Denis Colen’s parents.

Laureijs Denis Colen is the earliest generation for whom church records are available. On 14 July 1602, Laureijs Denijs Colen had banns published in the Roman Catholic Church of Tilburg to marry Lijnken Jan Adriaensdr. Three marks in the margin of the marriage record indicate that the three proclamations were held without opposition. The marriage was solemnized in on the 28th.1

The names of the bride and groom in this marriage record closely resemble those of Aleid’s parents. Lijnken is a diminutive of Catharina/Catelijne. As the only Laureijs Denijs Colen and Catharina/Lijnken in the index in this period,2 this has to be her parents’ marriage record.

On 26 January 1620, Jan Willem Mutsaerts and Lijntken Jan Adriaens had banns published for their marriage. Witnesses were Lauwreijs Adriaens and Corst Lauwreijs Denis. The marriage was solemnized on 13 February.3

The name of the bride matches that of Laureijs Denis Colen’s wife in the 1602 marriage record. 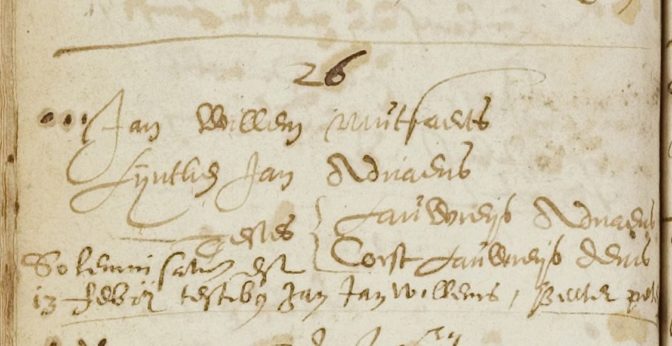 Marriage record of the second marriage

According to the burial record created by the church, Laureijs Denijs Colen was buried in Tilburg on 4 April 1617.4 The time of his death fits with a second marriage of his widow in 1620. The burial record does not give any names of relatives.

The accounts of the estate of the children of the late Laureijs Denijs Colen of whom the mother was Catharina, daughter of Jan Adriaen Smolders span the period 20 February 1620 to 1628. The guardians who had to account for the expenses were Wouter Denis Colen and Peter Jan Adriaen Smolders.5

These dates are significant. 20 February 1620 is a week after the marriage of Lijntken Jan Adriaens to Jan Willem Mutsaerts. Before being allowed to remarry, a widow with minor children had to come to an agreement with the guardians of her minor children. The estate had to be appraised so the share of the minor children could be determined. The accounts show that there was an estate division on the 20th February 1620. It mentions that Jan Willems had married the children’s mother. That shows that it was Aleid’s mother Catharina Jan Adriaen Smolders who married Jan Willem Mutsaerts. The end of the guardianship accounts in 1628 coincides with Aleid’s marriage, when she would no longer need a guardian.6 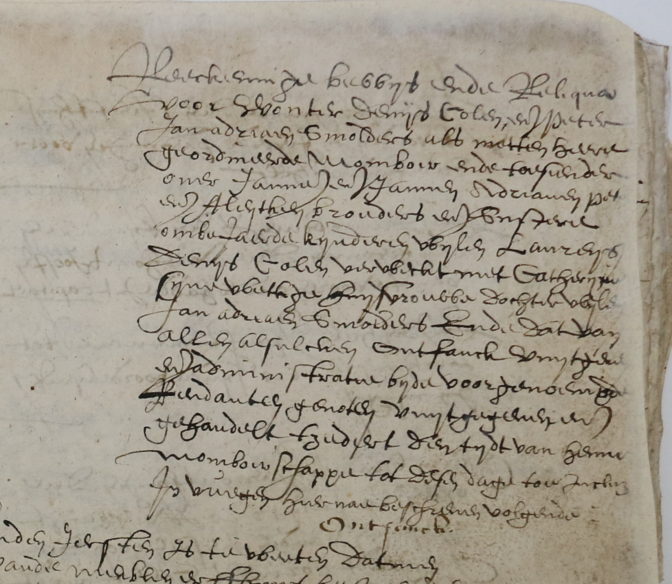 Introduction of the guardianship accounts

Based on his patronymic and last name, guardian Wouter Denis Colen was Laureijs’ brother, a logical choice for that role. The other guardian, Peter Jan Adriaen Smolders, was apparently Catharina’s brother, so both sides were represented, as was common. Another relative mentioned in the record was Jan, the oldest son of Laureijs Denis Colen and Catharina, who signed off on the estate division, implying he was already of age.

The approximately 100 pages of the guardianship accounts mention several incomes and expenses. They show that the children received a house next to the shed, without specifying its location more precisely. The income includes payments of rents of farm land, indicating that the family owned more land than they used themselves.

The majority of items were purchased by many different individuals. The sold items included several looms and other weaving implements, implying that Laureijs had been a weaver. That is a type of occupation often passed on from father to son. It is possible that one of the man named Denis was his father, although given the different types of property that the accounts indicate, it is likely that Laureijs’ father had already passed away.  Jan Denis Colen and Wouter Denis Colen were apparent brothers of Laureijs Denis Colen. 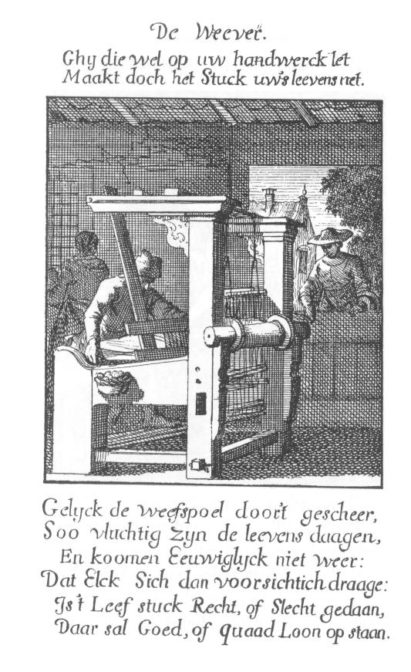 Weaver. Print by Jan and Casper Luyken, circa 1690 (public domain)

Agreement between children of first marriage

On 1 February 1620, Denijs and Corstiaen, sons of Laureijs Denijs Koolen, of whom the mother was Aleijdt daughter of the late Corstiaen Cornelis Antonissen, received a third of unspecified property in Tilburg from their parents’ estate.8 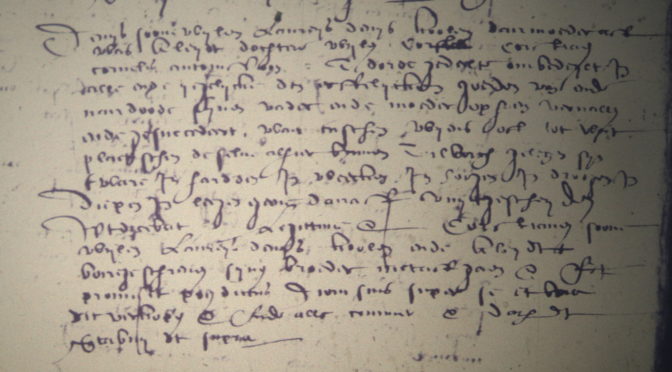 The names of Laureijs, his first wife, and two of the children (Corstiaen and Denijs) match the information from the 1 February 1620 record, proving this is the same family. This record gives Laureijs’ father’s name as Denijs Laureijs Colen, giving us his father’s patronymic. 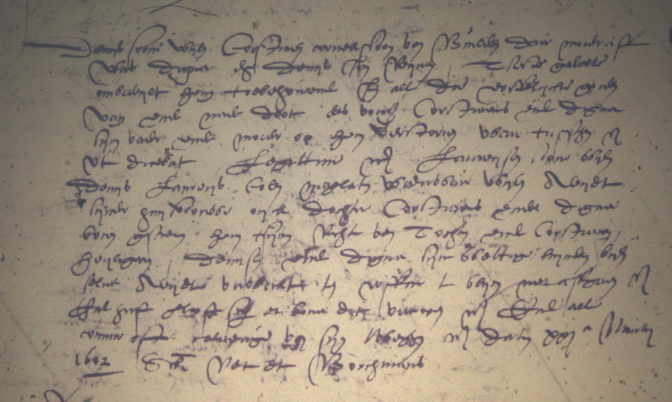 On 19 March 1605, Jan and Wouter, brothers, sons of the late Denijs Laureijs Coolen, Phocus, son of the late Jan Gerritsen as husband and guardian of Barbara his wife, Adriaen, son of Adriaen as husband and guardian of Machtelt his wife, sisters, daughter of Denijs foresaid, of whom the mother was Barbara daughter of Peter Goijart Pulskens, for themselves, and Phocus also with Denijs Corstiaen Cornelis Anthonissoon as guardian and supervising guardian over Corstiaen, Heijliger, Denijs, and Dijgna, brothers and sisters, minor children of Laureijs Denijs Laureijs Coolen, sold property in Tilburg.10

Phocus Jan Gerritsen was one of the purchasers in the 1620 estate sale of Laureijs Denijs Colen and Catharina Jan Adriaen Smulders. His marriage to Barbara, daughter of Denijs Laureijs Colen and Barbara Peter Goijaert Pulskens means he was a brother-in-law of Laureijs. 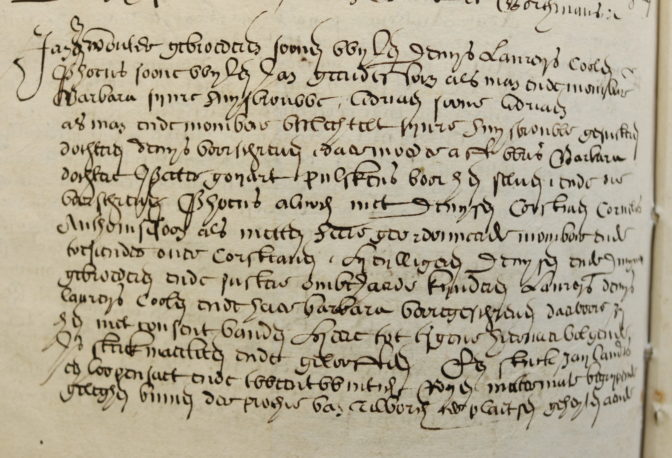 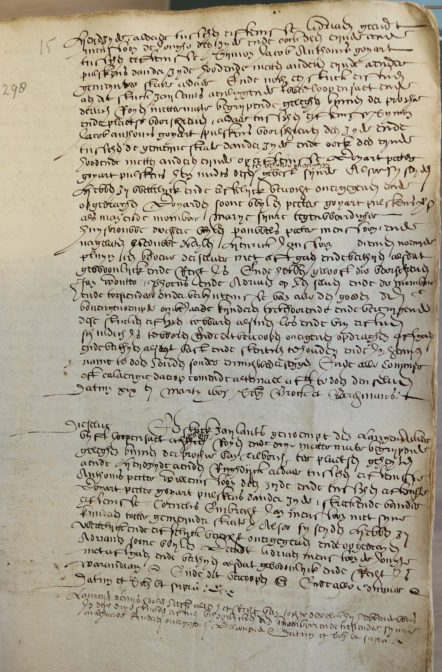 The four pages of heirs in the record are all Pulskens heirs. The inclusion of Laureijs’ children among the Pulskens heirs indicates that Laureijs was the son of Barbara, daughter of Peeter Goijaert Pulskens.

Wouter Denis Colen appeared as guardian over the minor children of Laureijs Denis Peter Colen and Catharina Jan Adriaen Gerit Smolders in their guardianship accounts. Jan and Wouter Denis Colen and Focus Jan Geritsen were among the purchasers in the 1620 estate sale. The combination of these names shows that this is all the same family. 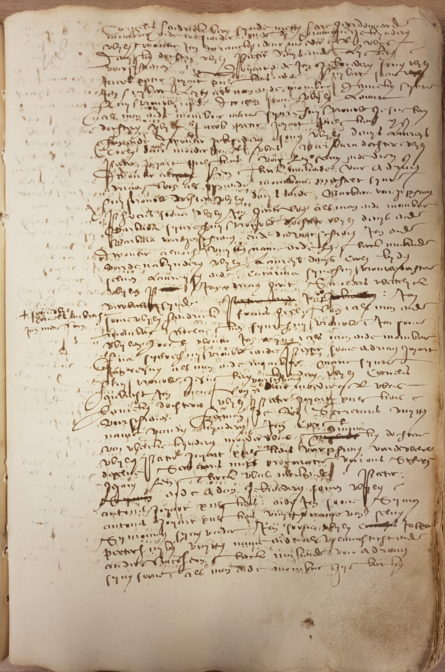 Page from the sale mentioning the Colen heirs 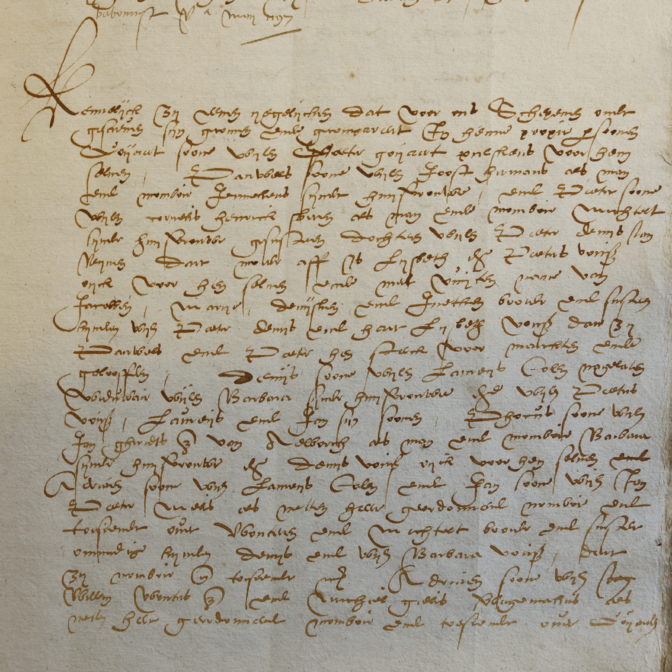 These children are the same as the children of Denijs and Barbara in the 1605 and 1618 records.

The presence of these children in the estate division of Barbara’s father shows that they were all her children. If Laureijs had been the son of a different wife of Denijs Laureijs Colen, he would not have been named among the heirs.

The tax book of 1595 shows an entry for the children Denijs Laureijs Colen in the Heijdzijde district. Immediately above is an entry for Laureijs Denijs’ son.13

The entry for Laureijs is written in a different ink and the lack of spacing suggests it was added later. This land is probably the share of the Pulskens estate divided in the 1595 estate division, the same year that this tax book was created. The entry for Denijs Laureijs Colen and Laureijs Denijs is bracketed by those of Sijmon Anthonis Pulskens (seven entries before) and Quirijn Embrecht Pulskens (next entry). These were two other Pulskens heirs that received land from Peter Goijaert Pulskens estate. The timing and neighbors confirm that it is the Pulskens land. 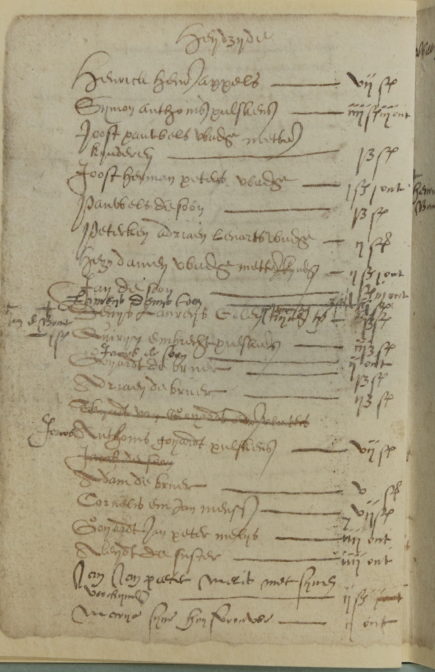 That’s fourteen generations down, fourteen to go! The half-way point! Of course, the second half will be more challenging, as records get more scarce. Church records in Tilburg start around 1600, so no church records will be available for earlier generations. Tilburg court records start in 1495, and will hopefully allow us to trace the line back at least a few more generations. Stay tuned!