Was Eleanor of Aquitaine my Ancestor? Generation 9 – Jan Smulders

This is the tenth post in a series about my possible line of descent from Eleanor of Aquitaine. In the first post, I explained how I discovered the possible line, and how I am going to verify it one generation at a time. In the last post, I proved that my fifth great-grandfather Hendrik Smulders was the son of Jan Smulders and Catharina Cleijberg.

Research into Jan’s son Hendrik had already uncovered the marriage record of Jan Smulders and Catharina Cleijberg and the baptismal records of some of their children. The records will be analyzed for more information.

Johannes Smulders married Catrien Klijberg in Tilburg on 27 April 1749 before the aldermen’s court of Tilburg, after having banns published on 12 April 1749. Johannes Smulders was a single man, age 33, born in Tilburg, living at Klijn Hasselt [a district of Tilburg], and was assisted by his uncle Denijs van Vlijmen, who declared that the parents were deceased. His bride was 22 years old, single, and also born in Tilburg. She was assisted by her father Willem Klijberg.1

Johannes is a variation of Jan, Catrien is the Dutch variation of Catharina, and Klijberg is a spelling variation of Cleijberg. Apart from these minor variations, the names of these spouses match the names of the parents of Hendrik Smulders in his baptismal and death record. No other Smulders-Cleijberg marriages were found in the index of records of Tilburg and the surrounding areas between 1720 and 1753,2 implying this is the marriage record of Hendrik’s parents.

The marriage record does not name Johannes/Jan’s parents, who died before 12 April 1749, but gives us the name of an uncle: Denijs van Vlijmen. This suggests that Jan’s mother was a Van Vlijmen, or that one of his aunts married Denijs van Vlijmen. It was more common for a blood relative to stand in for deceased parents than for relatives-by-marriage, so the most likely explanation is that Denijs van Vlijmen was the brother of Jan’s mother.

Jan Smulders and Catharina Cleijberg had the following children:

Jan was called Joannes Henricus Smulders when his last child was baptized. These middle names in this time and place were usually patronymics, implying that his father’s name was Henricus, the Latin version of the Dutch Hendrik.

The list of witnesses gives us two Smeulders witnesses: Anna and Anna Maria, perhaps the same person. This was probably a close relative, perhaps sister, of Jan. Joanna van Vlijmen may be related to his mother, if she was a Van Vlijmen.

On 3 September 1768, Joseph Cleijberg appeared as guardian and Francis Cornelis Beens as supervising guardian of the five minor children of the late Jan Hendrik Smulders, procreated with Catharina Willem Cleijberg to record their estate inventory. The list of assets includes a house and a small piece of farm land in the Goirken hamlet of Tilburg. The moveable goods included a loom to weave wool, indicating that Jan had been a weaver. They owed money to many people, mostly for groceries, deliveries of food and fuel, and borrowed money, totalling about 400 guilders. The value of the assets was not given, so it is not clear if the estate had a positive balance.10

The record tells us that Jan Hendrik Smulders died before 3 September 1768, and confirms his patronymic as “Hendrik” [Dutch form of Latin Henricus]. The formulation does not make it clear whether Catharina Willem Cleijberg had also died. It shows that five out of their six children were still living, which is consistent with the information from the baptismal registers that they had six children, including one daughter Maria Catharina who died in 1755. 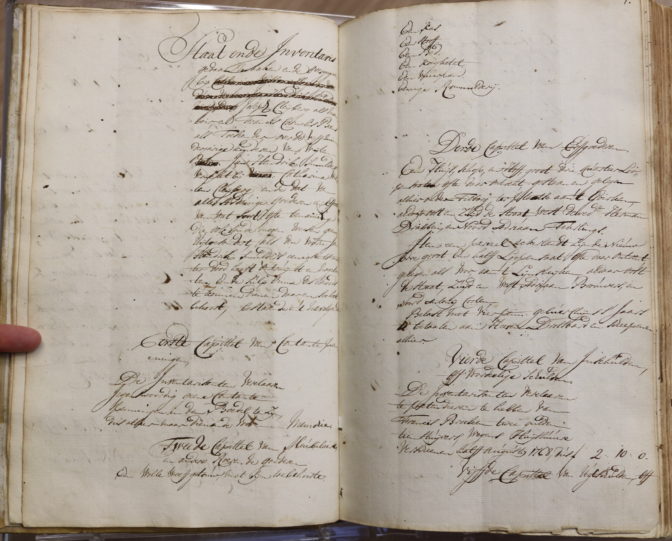 A notarial record of 22 December 1768 provides direct evidence about the identity of Jan Smulders’ parents. On that day, several witnesses testified before notary publiic Cornelis Bles in Tilburg about the family relationships of the Smulders family.

That said Hendrik Jan Janse Smolders alias Tats was married to Petronella Hugo van Vlijmen, also known as Huicklom, that from this marriage were born two children, one named Anna Maria Hendrik Smolders, the requester in this case, and the other Johannes Hendrik Smolders who was married to Catharina Cleijberg, from which marriage were born and currently living five minor children currently also living in this location.

They testify that they all knew these persons well, and spoke to them and associated with them many times. Done in Tilburg on 22 December 1768.11 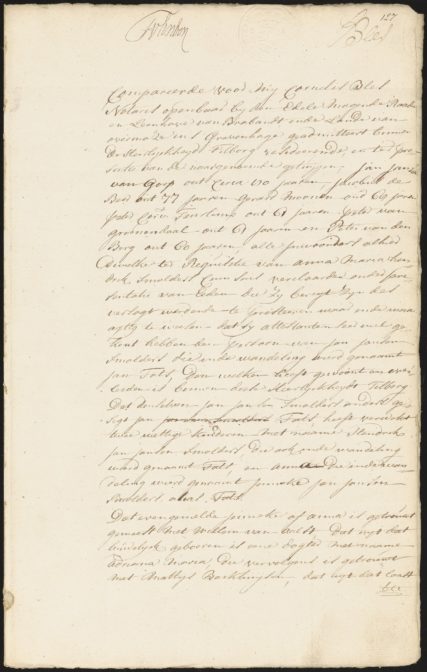 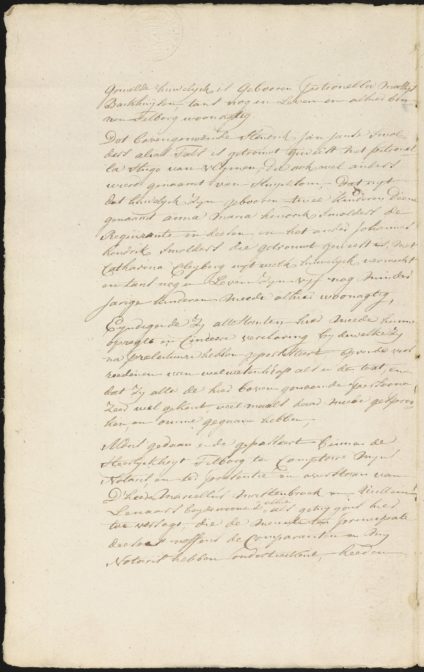 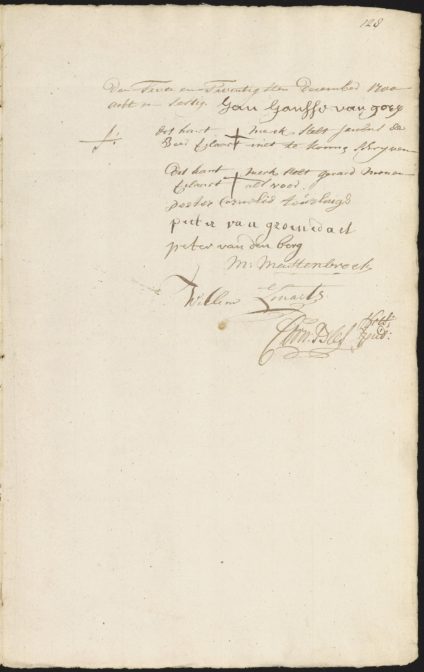 This genealogical jackpot provides evidence about four generations of the Smulders/Smolders family:

Johannes Hendrik Smolders is talked about in the past tense, suggesting he died before 22 December 1768. The combination of his matching first name, patronymic, last name, and wife’s name prove that this is the Jan Smulders we are researching. This gives us the names and aliases of his parents and the name of his paternal grandfather. It also shows that Jan had a sister Anna Maria, presumably the woman who witnessed the baptisms of two of his children. Adriana Maria van Aalst, the wife of Mattijs Backhuijsen, was probably the Adriana Backhuijsen who witnessed the birth of another child.

A follow-up record of 5 July 1770 explains why this record was created.

Before notary Cornelis Bles appeared Anna Maria Hendrik Smulders, adult, and Joseph Cleijberg and Francis Corn: Beens as guardians over the minor children of Catharina Cleijberg of whom the father was Jan Hendrik Smolders, Peter Corn: Teurlinx and Cornelis van Pels as guardians over the minor child of Mattijs Backhuijsen procreated with the late Johanna Maria van Aalst, Lambert Joahum van Lissen, Norbart Justinus van Lissem, Maria Willem van Beurden, adult daughter, and Sr. Arnoldus Piggen as poor master of the Holy Ghost Poor organization in this location, all residents in this manor, who declared that Johan Adriaan van Meurs, whom they had given power of attorney on 19 October 1768 to receive and administer the inheritance left by the late Norbart Adriaan Smolders, died in Mercxplas, did an accounting of all the administration, receipts and expenses as he did in that case, so that they have received and are content with the sum of 1562 guilders and 5 cents Brabant currency, so this record is a quitclaim.
Tilburg, 5 July 1770.12

This record shows that the children of Jan Hendrik Smolders were entitled to a share in the inheritance of Norbart Adriaan Smolders, an apparent paternal relative. That explains why Anna Maria Smolders needed witnesses to testify about the family relationships. This record shows that Catharina Cleijberg was living on 5 July 1770. 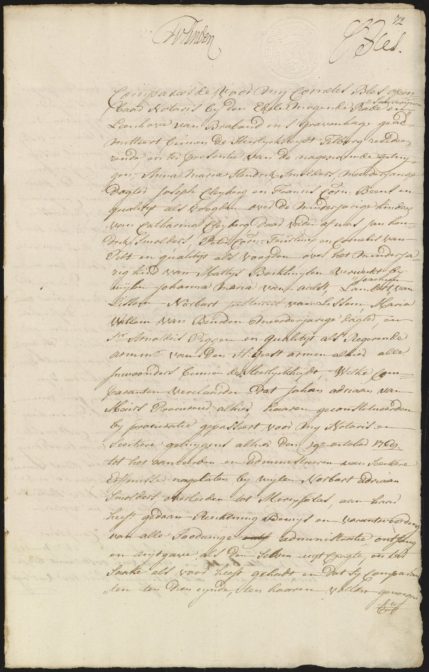 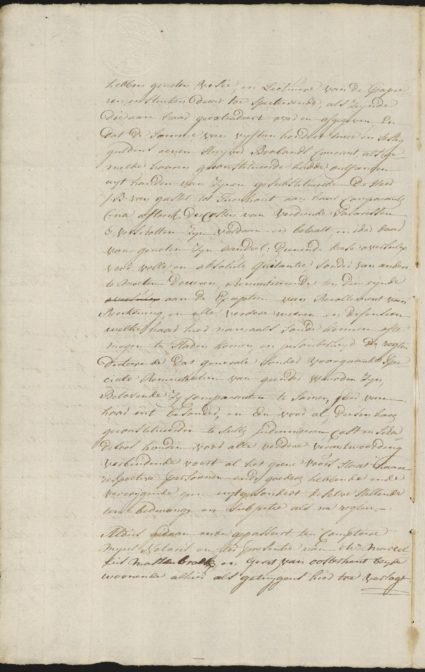 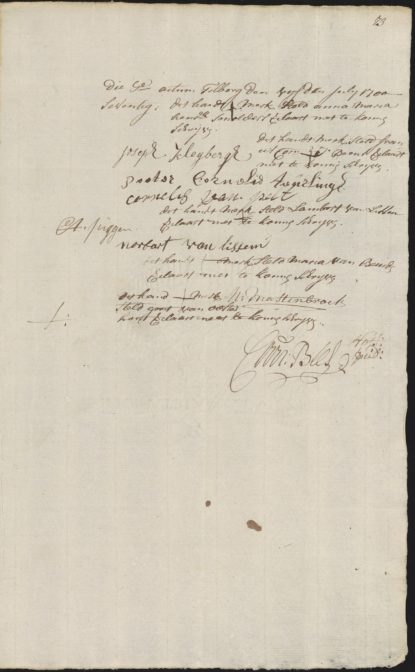 Notarial record about the inheritance

His place of residence matches the place where Jan Hendrik Smulders owned property according to his estate inventory. Jan Hendrik Smulders left minor children. These matching details, combined with the absence of other Jan Smulders burials in this timeframe, proves that this is the correct record.

Catharina Cleijberg was buried on 19 April 1777. The burial record identifies her as Catrina Cleijberg widow of Jan Hendrik Smulders in Goorke, leaving children.14

If this was the baptismal record of Jan who married in 1749, he was 35 or 36 at the time of his marriage rather than the 33 that the record said he was. Such minor discrepancies are not uncommon during this period before the introduction of the civil registration; especially with a bride that was more than ten years his junior.

Apart from minor spelling variations, the names of the parents match the information from the 1768 notarial record, which named his parents Hendrik Jan Jan Smulders and Petronella Hugo van Vlijmen, also named Van Huijcklom. This is the only baptism for a Jan, son of Hendrik Smulders and Petronella that could be found in the index of baptismal records for this period and place.

Joanna and Anna are two variations of the same name. If two children have the same name in a family, that usually means that the first one died. The next child of the same sex would traditionally get the same name. No other children of Hendrik Smulders and Petronella van Vlijmen/Heukelom were found in the index. This confirms that Jan had a sister Anna Maria, and no other siblings, which matches the information from the 1768 notarial record. She was probably also the Anna Smeulders and Anna Maria Smeulders who witnessed the baptisms of two of Jan Hendrik Smulders’ children.

When Jan married in 1749, he was assisted by his uncle Denijs van Vlijmen. Denis was of age in 1749, when he appeared in the marriage record of Jan Smulders as his uncle. He must have been born before 1724, and probably a generation earlier. No baptism of a Denis/Dionysius van Vlijmen or Van Huijcklom was found in the index of Tilburg baptisms.17

“Dircken” is a patronymic, meaning “son of Dirck.” In this period, not everybody used a hereditary surname. Instead, many people used patronymics. Hugo may have used Van Vlijmen or Van Huijcklom in some records, and a patronymic in others. The next blog post will show whether this Hugo Dircken is indeed Petronella van Vlijmen’s father.

Naming patterns support the theory that Jan was the son of Hendrik Jan Smulders and Petronella Hugo van Vlijmen also known as Van Huijcklom. Jan was apparently named after his grandfather Jan Jans Smulders. Jan himself named a son Hendrik and a daughter Petronella, apparently after his parents.

Indirect evidence supports the identification of Hendrik and Petronella as Jan’s parents: their daughter Anna Maria was probably the Anna Maria Smulders who witnessed the baptisms of two children of Jan, and Petronella’s apparent brother Dionisius/Denis appeared as Jan’s uncle in his 1749 marriage record. Jan was apparently named after his grandfather, and named two of his own children after Hendrik and Petronella. Jan used “Hendrik” or “Henricus” as his patronymic.

No evidence was found to suggest that Jan was not their son. Together, this body of evidence proves that Jan was indeed the son of Hendrik Jan Jan Smulders and Petronella van Vlijmen, also known as Van Huijcklom.

That is nine generations down, nineteen to go. New challenges await us in the 1600s, when fewer people used hereditary surnames, but we still have a range of sources to work with so it should be possible to prove the line back at least a few more generations.

Next up: Generation 10 – Petronella van Vlijmen.