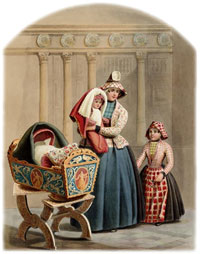 Before 1811, hardly anyone in Friesland had a last name. People called themselves after their father, which was called a patronymic.