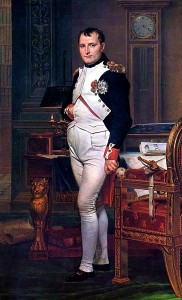 The French occupation from 1795-1813 introduced many new types of administration, including the civil registration. To properly record people, it was necessary that they all had a last name. In 1811 and 1813, Napoleon decreed that everybody had to register their last name.

After the French occupation ended, the Dutch government decided to keep the obligated last name. In 1825 they required that everybody who had not registered his name yet should do so.

Information in a name taking record

A name taking record usually includes the name of the head of the household, place of residence, the names of the children (sometimes including the grandchildren) and their ages. Widows often registered a name for their children which was different from her own name. 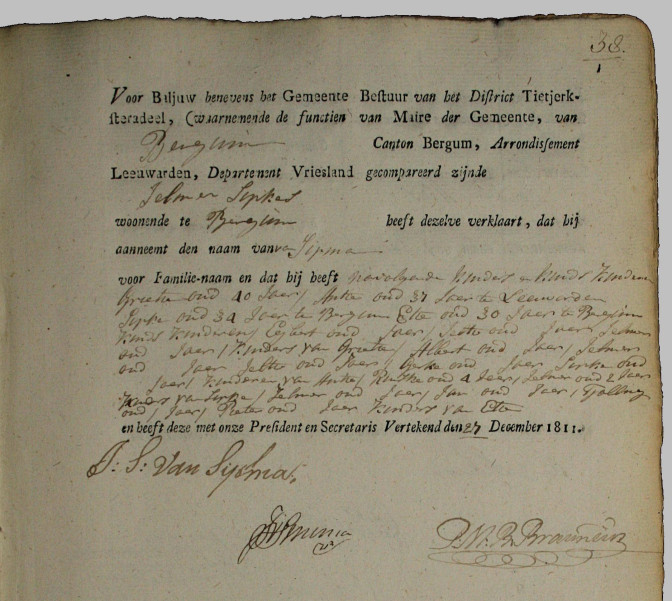 Appeared Jelmer Sipkes, living in Bergum, who declared to take the name of Sipma as family name and that he has the following children and grandchildren:

This record gives us three generations of the Sipma family from Bergum. It also suggests the origin of the name Sipma, which probably comes from the patronymic (name derived from the father’s name) Sipkes. It is interesting to note that the signature uses the name “Van Sipsma” instead of the name Sipma that was just recorded. It took a while for people to get used to their new names and spelling variations were not uncommon in the first years of the civil registration.

Most people in the Netherlands already had a surname in 1811 and did not have to register their names. There are basically two groups of people for whom you can find name taking records: people from the northern provinces and Jews.

In the northern provinces of Groningen, Friesland, Drenthe and Overijssel, many inhabitants still used patronymics and did not have a surname. In this region, name taking records are a rich source of information and are often the earliest known occurrence of the name.

In the other provinces, name taking records do not include a large part of the population since most people already had a last name. One group of people that did not always use a last name before 1811 were Jews. In provinces like Zeeland and Noord-Brabant, most families you will find in name taking records are Jewish. In the northern provinces, where many people took last names, Jews were often recorded in separate ledgers.

Not all the name taking records that were created, still exist. Name taking records for some municipalities in provinces like Friesland, Drenthe and Zeeland have been lost. You can search the online catalogs of the provincial and local archives for the term naamsaanneming to see which records survive.

Some local archives also provide online access to these records. You can find them via the Digital Resources website by searching for naamsaanneming on the “internet” page for the province you’re looking for.