A couple of months ago, I was asked by the producers of the US version of Who Do You Think You Are? to help with the final leg of Josh Groban’s journey to uncover the story of his ancestor Johann Jacob Zimmermann. They had found out in Germany that Zimmermann came to Rotterdam, the Netherlands, on his way to Pennsylvania, and died around the time of departure in August or September 1693. Could I please help find out where he was buried?

Wait, let me think. You betcha!

Searching for the burial

Before 1811, the burial records of the churches are the best source to find information about people who died. The Rotterdam City Archives has an online index of the burial records, but a search for Zimmermann did not produce any hits. I tried the Dutch translation of Zimmermann [carpenter], Timmerman and went wild with wildcards, trying Tim* and Zim*, but found nothing.

There was no guarantee that he would be in the database. He might have died shortly after departing and gotten a seaman’s grave. But that did not make sense, because there was a letter about his demise that the party sent back to Germany that arrived there by October 1693. If Zimmerman had died on board, they could not have sent word back to Germany until the ship arrived at its destination, which would take weeks. So I was convinced that Zimmermann had to have died in Rotterdam, and had to be in the burial records.

I tried the search engine again, this time filtering to browse all the burials in August and September 1693.

And there he was. Jacob Tijmmermann, buried 19 September 1693.

I pulled a scan of the original burial record from Familysearch. The bottom entry reads:

A little above the entry was the first date of the week, 13 September 1693. I calculated that Saturday must have been 19 September 1693, which matched the index.

So was this Jacob Tijmmerman who was buried on 19 September 1693 the same person as Johann Jacob Zimmermann, the ancestor of Josh Groban? I am convinced it must be:

The “wk” reference is unclear and may refer to the “westkant” [west side] of the church. I checked with archivists at the Rotterdam archives and they did not know the meaning either.

Is the grave still here?

The next thing was to find out if the grave was still there. As a transient, Zimmermann probably would not have been buried inside the church but outside, in the churchyard (cemetery). Since graves are routinely cleared in the Netherlands, that meant that the chance was small that the grave still exists. But it would be nice to visit the church, so finding the church would be the next best thing. 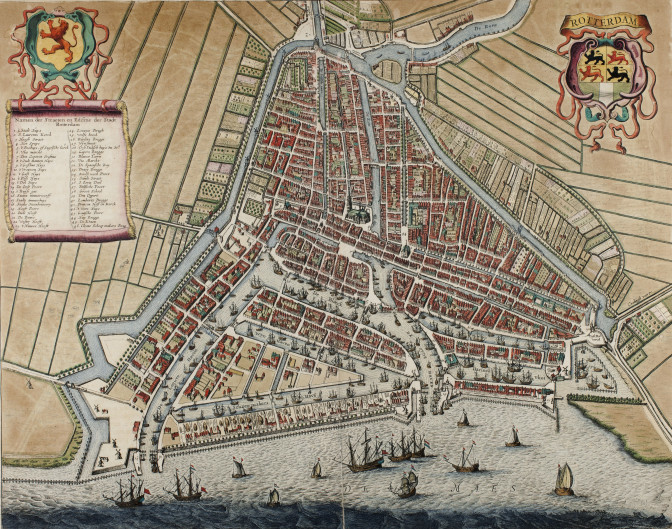 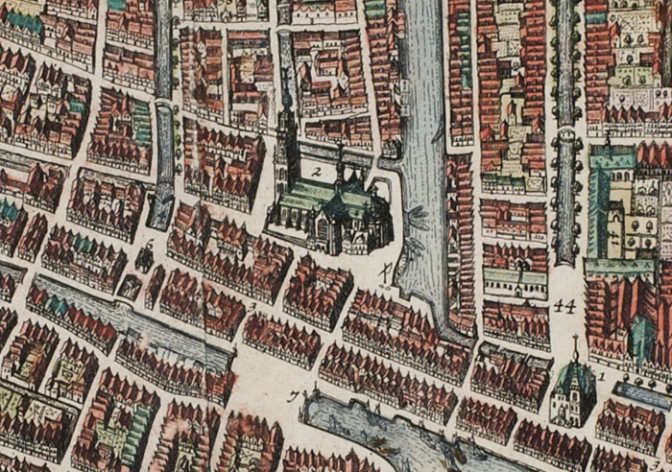 Map of Rotterdam – detail with the Laurens church

The map and legend showed that there was just one church in Rotterdam in the 17th century, the Laurenskerk [Laurence Church]. The fenced area at the north-west side might even be the cemetery.

Not being too familiar with Rotterdam, I wondered if the church would still be there. Rotterdam was heavily bombed by the Germans in World War II, which destroyed most of the inner city. I asked the archivists at the Rotterdam City Archives who told me that after the dust settled, only one building was still sort of standing. You guessed it, that was the Laurens Church.

The Laurenskerk has been fully restored and open for visitors. I went there to see if I could find any grave or cemetery, and as I feared, I could find nothing. The church itself is gorgeous though and I could already picture Josh Groban walking there to ponder over the end of his ancestor’s journey.

Laurens Church after the bombing of May 1940. Credits: Cultural Heritage Service (CC-BY-SA)

I can only imagine the tough decisions that producers have to make to fit centuries worth of stories in forty-five minutes worth of television. The decision was made not to include the Rotterdam part of Zimmermann’s journey in the episode.

Even though I’m disappointed, I can understand that decision. The Rotterdam findings did not advance the story that much since Josh already found out in Germany that his ancestor died in Rotterdam before leaving for Pennsylvania. Still, it would have been a nice ending to see Josh complete the journey of his ancestor.

As TLC’s programming in the Netherlands is different, I haven’t seen the episode myself so I’m very curious to see the result. I read Roberta Estes review of it and can tell that they did an amazing job. Did you see the episode? What did you think?

Filed Under: Blog Tagged With: WDYTYA