Last month, I had the opportunity to visit the Family History Library in Salt Lake City while I was there for an institute and board meeting. What a special place.

I can’t believe how many people I met, all so generous and wonderful. I had never met any of them in person before but I had known many of them online for several years (or several decades, as in the case of Cyndi Ingles of Cyndi’s List) so it felt more like a high school reunion than a first meeting. And what a fun reunion it was, where nobody’s eyes glazed over when you talk genealogy 🙂

Research for my portfolio

While I was at the library, I finished some last pieces of research for my BCG portfolio that I wrote about last week. 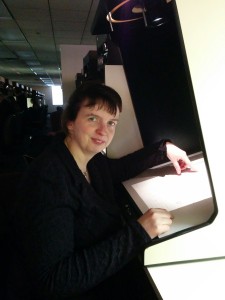 Research at the library

The Family History Library has microfilms of the church records from Suderwick in Germany, the place of origin of my Kastein ancestors. Suderwick is just two hours away from my house, and the original records are kept in Münster, just 2.5 hours away. But the Episcopal Archives in Münster don’t allow image copies; you can only take notes. No scans, no photographs, even without the flash. Since a whole section of my tree is from Suderwick, I want to be able to browse them at my leisure. These microfilms are not distributed in Europe, so I had hired some researchers to scan the whole books for me, but there were several other books I wanted to check for myself.

I was glad to finally be able to see the marriage record of my ancestor Gerrit Jan Kastein to Berendina Duenk, the first generation of my Kinship Determination Project in my portfolio, which I had only seen as an index entry until that point. I was hoping it would contain the names of his parents so I could figure out which of the two same-named Kastein cousins he was, but of course, it did not. The only clue to his identity was the name of a witness: Wessel Kastein. And what do you know, both same-named cousins had a brother Wessel…

At that point I was beginning to think I would not be able to solve the puzzle. Worst case, I could have left the identity of his parents unresolved, since my narrative focused on two generations of his descendants, but I hate open ends like that. When I got home and studied all the sources in detail, including the regulations underpinning the creating of these records, I realized I had enough indirect evidence to solve the puzzle.

I decided that if I am worthy of certification, I should have the guts to claim victory  instead of sitting on the fence, so that’s what I did. That is a big step for me, since in the Netherlands indirect evidence is usually considered as a sign of incomplete research. We have such an abundance of high-quality records that it’s rare to not find many pieces of non-conflicting, direct evidence. It’s rare to see a proof argument in Dutch pulications, even in reputable journals. Learning how to reliably build cases from indirect evidence is one of the main skills I learned from my contacts with American genealogists.

Another piece of research I did for my portfolio was into three children of Gerrit Jan Kastein and Berendina Duenk who emigrated from the Netherlands to Wisconsin in the mid 1800s. I had not found all of their marriage and death certificates yet. In most cases, I had found the dates in less reliable records, but I wanted to see if I could find the actual certificates.

I found some of these records, but not all, which was fine. Recording marriages and deaths did not become mandatory in that area until 1907, so there may not even have been a record. By completing this research, I had an explanation and justification for using lesser quality sources, like a grave with an unknown informant.

The Board for Certification of Genealogists wants us to demonstrate reasonably exhaustive research and analysis of sources, and I believe I did that. You could debate how “reasonable” it is to fly halfway across the world to look up some records, but I did not want to hire anyone unless I could tell them exactly where to look, so I was happy for the opportunity to do the research myself. 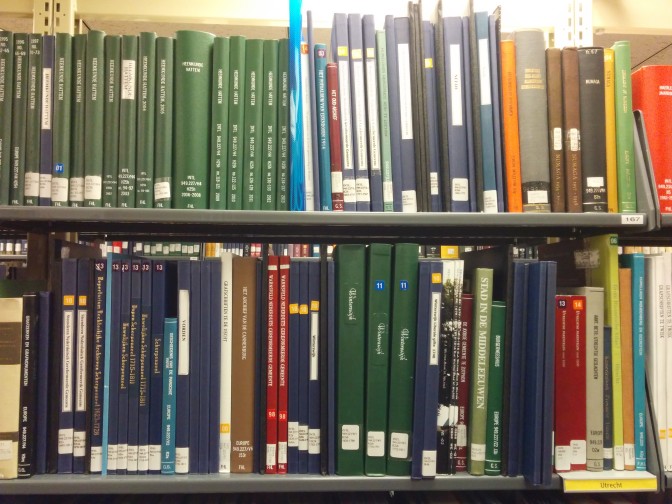 Shelf with books from Winterswijk, my father’s home town

I also had the opportunity to meet some of the people who work at the library. On the international floor, there are several researchers who help people with their Dutch research. I gave an inpromptu lecture about researching Dutch ancestors during lunch one day and shared my top tips. For those of you who missed it, I used the slides from a Dutch Genealogy workshop I gave for a research center in Wisconsin a few years ago.

They had some great questions that I was able to answer for them. Most of them were unaware of the marriage supplements and the opportunities that they offered for finding your ancestors, so I think that was the biggest take-away for most of them. I could also shed some light on the changes at WieWasWie and the paid subscription that they introduced earlier this month.

Facilities at the library 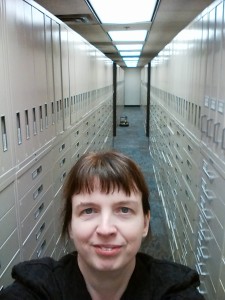 “Shelfie” of me at the Family History Library

I was amazed at how accessible the library was. Most books and films were just out on the shelves. Some of the lesser-used sources were off-site or in high-density storage, and needed to be requested, but all of the sources I needed were there at my fingertips.

You could bring your bags, coats and even bottled water to the table. The only security measure I saw was a guard by the front door, but even he did not check your bags but just greeted you. What a contrast to most archives in the Netherlands, where you have to leave most of your personal belongings out in a locker, and can only take pencil and paper or a laptop into the reading room.

The scanning facilities were also cutting-edge. The microfilm scanners were very user-friendly and allowed you to create scans of microfilms on a thumb drive, free of charge. The photocopy machines similarly accepted a thumb drive, so I was able to scan several public domain books to bring home with me. What a wonderful service.

I cannot describe how grateful I am for this opportunity to do research in a place like this and meet all these generous people. The whole atmosphere at the Family History Library was one of trust and collaboration, which was remarkable to experience.

Thank you everyone, for a wonderful time. It may not be soon, but I’ll be back!