Quick tip – Canon of the Netherlands

Historians have compiled a Canon of the Netherlands; a list of fifty canonical events that everyone who is interested in the history of the Netherlands should know. This list was revised last year. The Canon website has the fifty events with background information, which is available in English. Some of the material for students, such as animations, lesson plans, and suggestions for further reading, is only available in Dutch. … END_OF_DOCUMENT_TOKEN_TO_BE_REPLACED 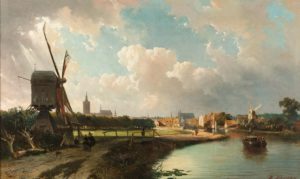 "Heemkunde" is the study of the home environment. The word "heem" means home or place of origin. "Kunde" is study or science. Many towns or regions have their own heemkundevereniging, historical societies. They will often give lectures, organize excursions, or have a magazine dedicated to the history of the area. Some heemkundeverenigingen have a genealogy section. They are great places to ask to identify or locate old family photos. The Stamboomgids website has a list of … END_OF_DOCUMENT_TOKEN_TO_BE_REPLACED

One old person ago... Women did not have equal rights. Women in the Netherlands got the right to vote in 1917. But until 1956, married women needed permission from their husbands to enter into any legally binding contracts. Two old people ago... Slavery was legal in the Dutch colonies of Suriname, the Netherlands Antilles, and the Dutch East Indies. Slavery was abolished in the East Indies in 1860 and in Suriname and the Antilles in 1863. Even then slaves were required to continue … END_OF_DOCUMENT_TOKEN_TO_BE_REPLACED 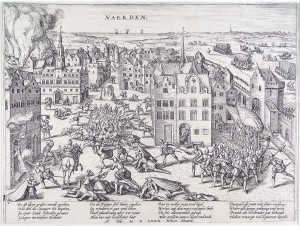 The Dutch war of Independence, commonly known as the Eighty Years' War or the Revolt, took place from 1568 to 1648. By the mid 1500s, the provinces that would form the Netherlands were part of the Habsburg empire, ruled by king Philip II of Spain. He was a staunch Catholic, while in many places in the Netherlands  the Reformation had taken root. The King's firm oppression of the Reformation led a group of nobles to abjure the King and declare the independence of the Dutch Republic. During the … END_OF_DOCUMENT_TOKEN_TO_BE_REPLACED

If you want to learn about Dutch history, you can read the 50 canonical articles at Canon van Nederland. These articles act as 'windows to the past' and were developed as the basis for the history curriculum in schools. Each window tells the story of one canonical event in the history of the Netherlands from prehistory to the modern day. Topics include Charlemagne, the Hanseatic league, Rembrandt, slavery and Anne Frank. Each article takes one landmark person, artifact or topic and shows how … END_OF_DOCUMENT_TOKEN_TO_BE_REPLACED