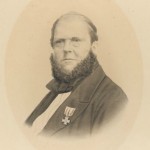 The term burgemeester means 'mayor'. Before 1795, when the French occupied the Netherlands and introduced new laws, most towns had more than one mayor. These were elected officials. Since 1795, each municipality only has one mayor. Mayors are appointed by the crown. In early records of the civil registration, it is not unusual for a mayor of a … END_OF_DOCUMENT_TOKEN_TO_BE_REPLACED