Here are some misconceptions I’ve encountered that people have about researching their ancestors. Some of them are probably true for other parts of the world too! 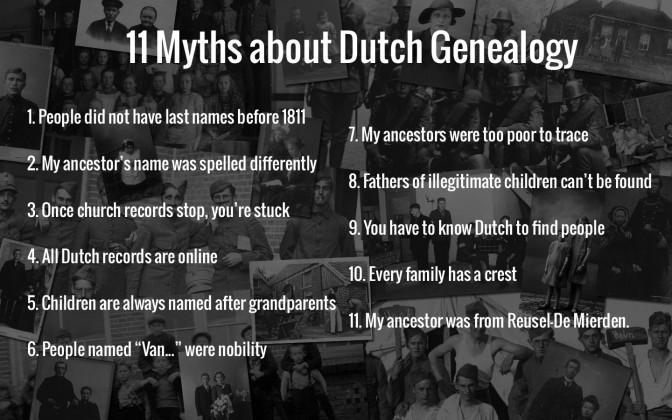 This myth has some truth, as he civil registration of births, marriages and deaths was introduced in 1811 and required everybody to have a surname. But most people already had surnames before 1811.

2: That can’t be my ancestor, my name was spelled differently

Many of our ancestors were illiterate, or simply had no concept of a ‘correct’ spelling. Never rule out a person because the name isn’t spelled how you think it should be. This is especially true for emigrants, who often adopted a variation of the Dutch name in the new country.

3: Once you get to the start of the church records, you’re stuck

In most areas, church records go back to the early to mid 1600s, which is when most genealogists hit a brick wall. But other records may exist that go back further than that, such as court records or town ledgers. Most of these records are not available online (see the next myth). See the case study of Jan Dirkse van Eps for an example of research in the early 17th century.

4: All the Dutch records are available online

While we are very lucky to have free online access to many important genealogical sources, that’s just the tip of the iceberg. A government project is now underway to digitize the top 10% of the national record collection, a project that will take 15 years. Some archives offer scanning-on-demand services to access records that are not available online yet. You can also hire a professional genealogist to help you.

5: Everybody named their children after the grandparents 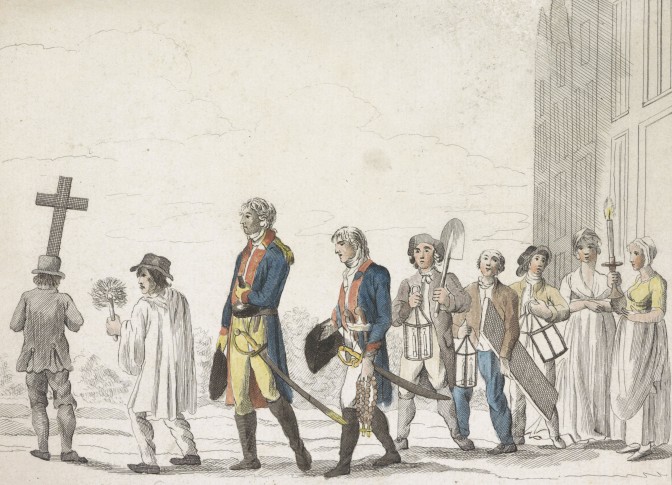 Procession of gullible people searching for gold that a trickster told them about, 1800. Credits: Rijksmuseum (Public Domain)

6: If your name starts with ‘Van’, you descend from nobility

“Van” means “from.” While many nobles were called after their domain and used Van-names, many other people with Van-names simply named themselves after their place of origin.

7: My ancestors were too poor to leave any records

Poor people may not have owned property and left land records, but there are plenty of other registrations that they occur in. Some registrations record everybody, like the civil registration or church records of baptisms, marriages and burials, while others actually record poor people better than rich people, such as church alms records or orphanage records. Many criminals were poor, and criminal records can be a great source of information about your ancestors.

8: It’s impossible to find the father of an illegitimate child

While in many cases, not enough records will have survived to prove the identity of a father, there are some strategies that may help.

9: You can’t find people if you don’t know Dutch

While knowing the language makes it easier, there are some sources that you can use if you don’t know Dutch, such as indexes that will point you to the right record. You can learn the basic Dutch terms to help you interpret the records. To help you read and understand the records even better, or access records that are not available online, you can hire a professional genealogist to help you.

10: Every family has a family crest

Family crests or coats of arms were used only by richer people, such as nobles, members of the government or merchants. Most poor people did not have a crest.

This last myth may be the most common of all, and can be found in millions of profiles in online trees all over the Netherlands. This tiny village showing up is the result of a software bug that automatically changed “Holland” to “Reusel-De Mierden, Noord-Brabant, Netherlands” because there is a street called Holland in that village.

What myths have you come across in your research? Please share them in the comments.